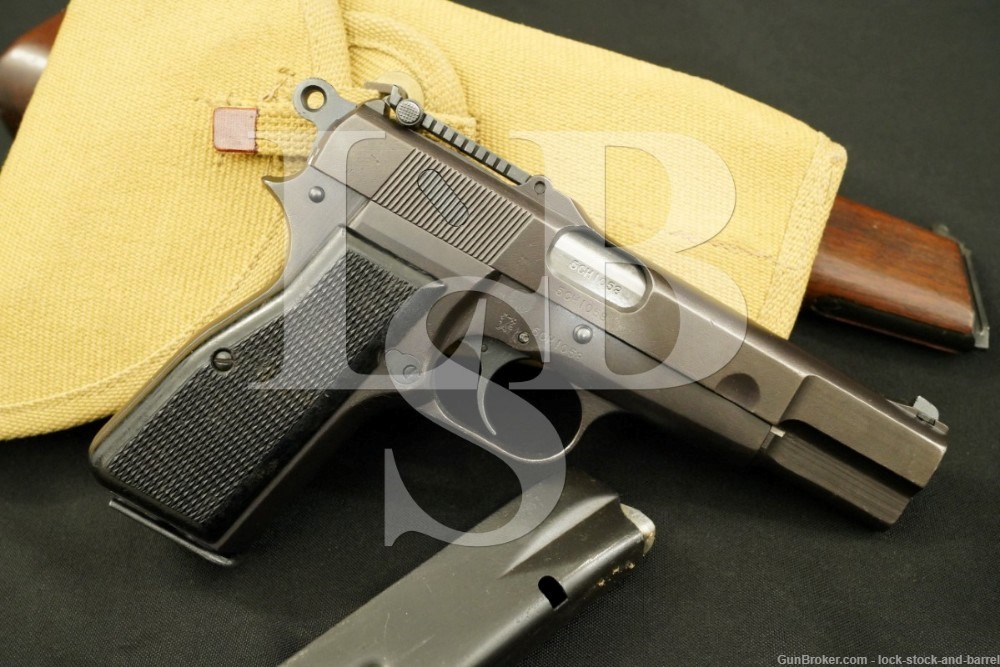 Markings: The left side of the slide is marked “MK. I* / BROWNING FN 9MM H.P” and “INGLIS CANADA” in front of the slide serrations. The right of the barrel, slide and frame are each marked “5CH1058”. There are also faintly etched crossed flags on the chamber. The right of the frame has crossed flag a proof marking. The butt has inspection marks. The left side of the hammer is marked “II”.

Sights / Optics: The front sight is a serrated, tapered blade dovetailed to a boss at the front of the slide. The rear sight is a “V”-notch type 2 tangent sight in a base integral to the slide. The arm graduates from “50” to “500” meters.

Stock Configuration & Condition: The grips are two-piece checkered black synthetic grips. The inside of each grip panel has “CL” inscribed in a “D” or bullet. The grips show scattered crazing, light nicks, scuffs and scratches, most in the smooth borders. The checkering shows light scuffs on either side with some compressed checkers on the right panel. The left panel is relieved for the lanyard ring that is not present. There are no chips or cracks. Overall, the grips are in about Good-Plus condition. The back strap is slotted for the included shoulder stock.

The shoulder stock is marked “S.A. LTD / 1945”. It shows scattered light nicks and scratches and no chips or cracks. It rates in about Fine condition.

Bore Condition: The bore is mostly bright with some scattered light erosion. The rifling is sharp.

Overall Condition: This pistol retains about 93% of its metal finish. The finish shows thinning at leading edges. There are infrequently scattered light nicks, dings, and scratches throughout the surfaces. The finish shows a faint plum hue throughout. There is light thinning on the controls. The screw heads are sharp. Overall, this pistol is in about Fine condition.

Mechanics: The action functions correctly. It has a frame mounted safety and the round hammer has a half cock safety position. The disconnect safety is functional. The slide has minor play on the frame. We have not fired this pistol. As with all used firearms, a thorough cleaning may be necessary to meet your maintenance standards.

Box, Paperwork & Accessories: This pistol comes with the previously mentioned wood hinge-top stock/holster, a beige canvas holster that is marked with a broad arrow within a “C” and “Z. L. & T. Ltd 1945”, and one 13-round magazine. The magazine is marked “JI” on the belly.

Our Assessment: As stated by Ian McCollum, “During World War Two, the Canadian government set up a loan program to help Chinese companies provide all manner of material aid to Canada’s allies. Among many others, one recipient of this aid was the Nationalist Chinese government under Chiang Kai Shek. Chinese representatives asked the John Inglis company to manufacture no less than 180,000 Browning High Power pistols, and the company agreed. After some wrangling, Inglis acquired a license from FH representatives to make the guns, got a complete technical package through the British government and FN’s representatives in exile, and the direct personal aid of Laloux and Saive from FN. Delivery proved difficult, though, with only about 4000 guns being shipped to Karachi and then needing to be flown over The Hump in cargo planes, along with massive amounts of other aid – and a few pistols didn’t get a lot of priority there. By the fall of 1944, the contract was canceled under concerns that it was not really contributing to any progress in the war against the Japanese, along with insistence from American General Stilwell that the Chinese forces be armed with weapons that could be supplied more easily through the American logistic network.” This example is in Fine condition and comes with an original wood stock/holster, a canvas holster, and one 13-round magazine. This is a beautifully preserved example of a No. 1 Mk. 1* pistol that would undoubtedly make a fine addition to a Hi-Power collection. Please see our photos and good luck!