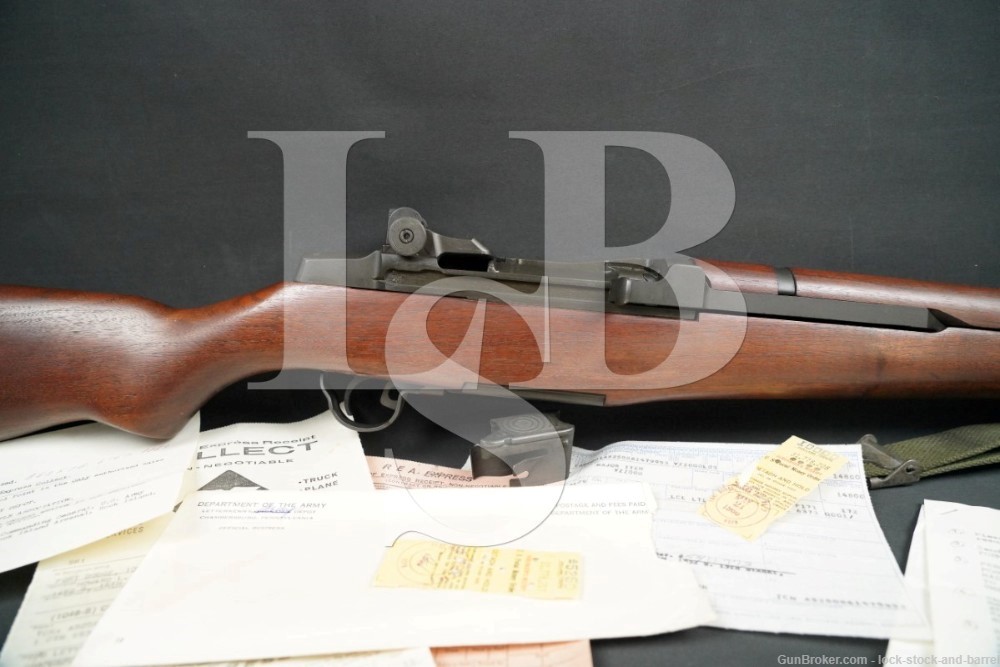 Stock Configuration & Condition: The left side of the stock (above the trigger) is marked with a Defense “Eagle” acceptance stamp. The face of the grip is marked with a “circled P” proof. The last 4 digits of the serial number are marked in the barrel channel which is a National Match marking (page 556 of Bruce Canfield’s book, The M1 Garand Rifle).
The front handguard is glued to the lower band. The wood has been built up with a bedding compound to better fit the action and the trigger group. These modifications are consistent with a National Match rifle.
The hardwood stock has a pistol grip, metal nose caps, a stacking loop, two sling loops and a metal buttplate with hinged door for storage in the butt. The buttplate shows surface erosion. The wood shows scrapes, scratches, and compression marks. Most of the marks are light but the rifle does show a more prominent scratch below the left side of the receiver. The LOP measures 13 1/8 inches from the front of the trigger to the back of the buttplate. The stock rates in about Very Good Plus to Fine overall condition. It would rate higher if the buttplate were replaced.

Bore Condition: The grooves are dark. The rifling is deep. There is erosion throughout the bore. It is heavier in the grooves. The bore shows an M.E. of -1 (negative 1). The throat shows a T.E. of 1.

Overall Condition: This rifle retains about 97% of its metal finish. The metal shows scuffs and light handling marks. The front of the barrel & gas tube show light scrapes. The right side of the receiver and front of the bolt show light thinning consistent with cycling the action. The markings are deep. Overall, this rifle rates in about Very Good Plus to Fine condition.

Box, Paperwork & Accessories: The rifle comes with paperwork that documents the purchase of a National Match M1 Garand from the Director of Civilian Marksmanship (DCM). The DCM became the Civilian Marksmanship program (CMP) 1996. Included in the paperwork is the shipping invoice, & carbon copy, from the “LETTERKENNY ARMY DEPOT”. The invoice and the carbon copy are also marked “Rifle .U.S. Cal. 30, M1, N/M” and with the rifle’s serial number. The parework also includes a purchase order that is marked “Rifle .U.S. Cal. 30, M1, N/M”. Much of the paperwork is dated “1966”. The paperwork shows creasing and discoloration from age as well as a few tears. The paperwork is in about Very Good condition. Please see photos.
The rifle comes with a single shot M1 Garand S.L.E.D. Clip (Single Loading Enhancement Device). It is in Fine condition.
The rifle has a green canvas sling attached. It shows scrapes & oxidation on the metal. It is in Very Good Plus to Fine condition.

Along with the quality parts mentioned above, the stock’s front handguard is glued to the lower band and the wood has been built up with a bedding compound to better fit the action and the trigger group. General Patton famously referred to the rifle as “the greatest battle implement ever devised”. Millions were produced during WWII and hundreds of thousands afterward, seeing use through the Korean War and into the Vietnam War. This is a RARE National Match rifle with rarely seen DCM purchase paperwork. A rifle like this is referred to some collectors as a Unicorn and would make a  great M1 Garand for your collection. Good luck.