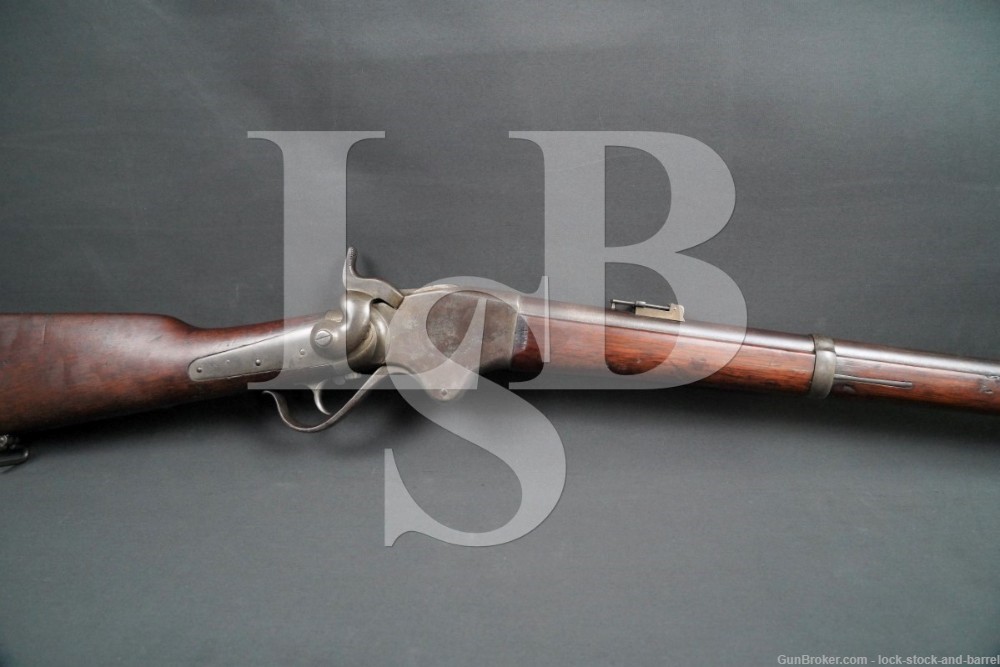 Sights/ Optics: The front sight is a blade fixed by the muzzle. The rear sight is a Model 1868 military folding ladder sight which is fixed to the barrel. The ladder presents a square-notch in the down position and when raised features an integral “U”-notch at the top and a “V”-notch slide. The raised ladder is marked “2”, “3”, “5”, “7” and “9” from the bottom-top.

Stock Configuration & Condition/ Grip: The stocks are two-piece smooth wood featuring a forend with a metal forend cap, a slot for the included cleaning rod, two barrel bands which are secured by springs and a butt with a straight wrist, a straight comb and metal butt-plate with a slot for the magazine. There are two sling swivels: one on the bottom of the front barrel band and one on the belly. Also, the left side of the wrist features a bar with a fixed saddle ring. The stocks have light-moderate handling marks, nicks, compressions and scuffs. Notably, there is a light crack on the heel which originates at the top of the butt-plate. Also, the forend has moderate handling marks including a scuff on the right side of the forend adjacent to the receiver, there are several dings scattered between the barrel bands on the right side of the forend. Additionally, there are several nicks and compressions on the left side of the forend which are concentrated between the barrel bands. Finally, there is moderate wear around the edges where the wrist meets the receiver and the edges where the right side of the heel meets the butt-plate. The LOP is 13” from the trigger to the rear end of the butt-plate. The butt-plate has some light-moderate handling wear and is coated in light surface oxidation. Overall, the stocks are in Very Good condition for Antiques.

Bore Condition: The bore is mostly bright with sharp rifling. There is light oxidation in the bore concentrated around the muzzle.

Overall Condition: The rifle retains about 35% of its metal finish. The exposed metal parts of the rifle are coated in light surface oxidation and the gun has taken a patina color, but bottom of the barrel, protected by the forend, retains much of its original bluing. There are light-moderate handling marks, nicks and scuffs on the rifle’s metal surfaces. Notably, there is finish loss and some moderate oxidation around the muzzle. Also, there is a light patch of wear just behind the front barrel band. The markings remain clear. The screwheads have light tool-marks but they remain serviceable. Overall, the rifle is in Fine condition for an Antique.

Mechanics: The action functions correctly. The rifle features a Stabler cut-off which allows the gun to be used as a single-shot and repeating rifle. We did not fire this rifle. As with all previously owned firearms, a thorough cleaning may be necessary to meet your maintenance standards.

Box Paperwork and Accessories: The rifle comes with a metal cleaning rod.

Our Assessment: This is a Burnside Rifle Co. manufactured Model 1865 Spencer Carbine repeater which was converted by Springfield Armory into a repeating rifle. The Burnside Rifle Co. was a private arms manufacturer that supplied the Union with arms during the American Civil War. The company had initially manufactured the Burnside Carbine, but it had several drawbacks that became increasingly problematic by 1864. It had an odd cartridge that was both expensive to manufacture and oddly shaped, plus it was a single shot carbine that was ill suited for service in a conflict where repeating arms were being deployed. In 1864 the Burnside company secured a contract with the US Government to manufacture the superior Spencer Carbine which was a repeater that lacked the major issues surrounding the Burnside Carbine. Unfortunately, the company needed time to adjust its manufacturing processes to make the Spencers, a process that took nearly 9 months. The first shipment of Burnside-manufactured Model 1865 Spencer Carbines were delivered to the US Ordnance Department on April 15, 1865, over a week after the last major Civil War engagement. The company still fulfilled the order, although none of the rifles were used during the Civil War. With the cessation of hostilities many arms manufacturers, including both the Spencer Repeating Rifle Co. and Burnside Rifle Co., went under due to lack of demand for military weaponry.

Referred to as Springfield Armory Rifle Musket conversions, a number of the Burnside manufactured Model 1865 Spencer Carbines were converted into rifles by the government. They were given new barrels chambered for .56-50 Spencer cartridges, the stocks and parts were either refinished or replaced plus the original Burnside serial number was stamped onto the left side of the barrel, just ahead of the receiver. Strangely, the original carbine ring and bar were left on the rifles. The conversions appear to have been performed between 1871-1874, the work ceased with the introduction of the Springfield “Trap-Door” breech loaded rifles. Eventually, these Springfield Armory converted Spencer Carbines were sold off. This is a nicely preserved and unorthodox Spencer Repeater that collectors of historical firearms will not want to miss out on!