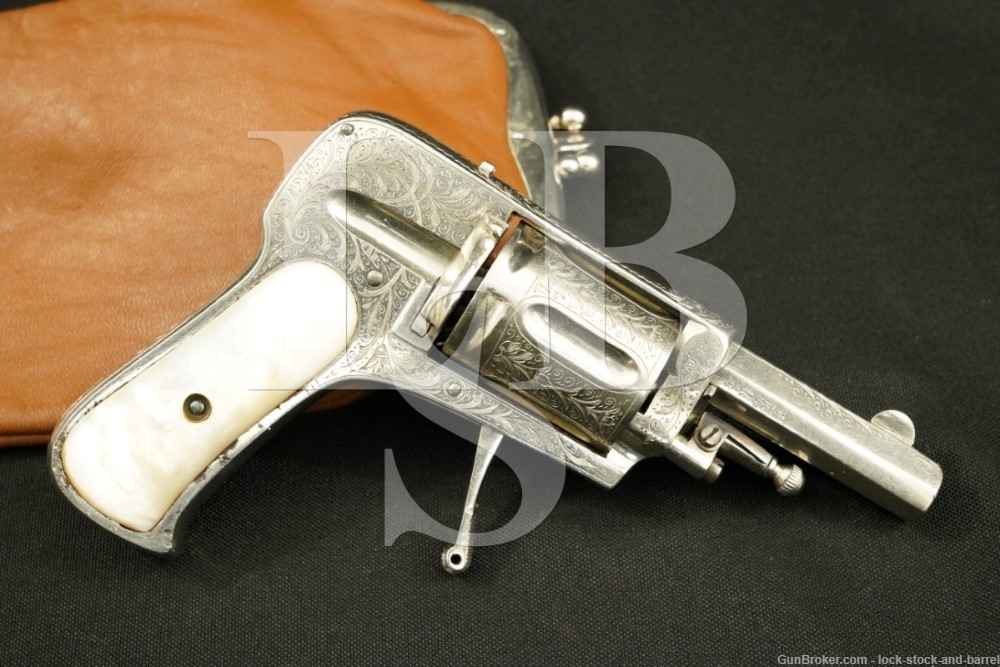 Markings: The revolver is covered in floral scroll engravings. The left side of the frame is marked with a crown above “JK” which indicates the gun was manufactured by Jules Kaufmann & Co. (used from 1890-1914) and “7.65” which is the caliber designation. The top-strap is marked “LEPAGE A. LIEGE”.  The right side of the barrel is marked with the following Belgian proof marks:  a lion above “PV” which was a nitro proof, a crowned “R” which indicates a rifled barrel and a star above “AH” which is an inspector’s marking. The rear end of the cylinder has the same nitro proof, the same inspector’s marking, a crowned oval marked “E / LG / *” which indicates the revolver was manufactured after 1893 and “7” which is a factory marking.

Sights/ Optics: The front sight is a blade fixed to the top of the barrel. The rear sight is a “V’-notch integral to the top-strap.

Stock Configuration & Condition/ Grip: The grip panels are two-piece ivory. The grips have some light handling marks. Notably, the bottom of both grip panels have small patches of brown discoloration. There are no chips or cracks. Overall, the grip panels are in Fine condition.

Bore Condition: The bore is semi-bright and the rifling is sharp. There is erosion in the bore.

Overall Condition: The revolver retains about 95% of its metal finish. The pistol has some light handling marks, nicks and scuffs. Notably, there are some light handling marks on the front strap which include two nicks. The markings remain clear. The screwheads have tool-marks but they remain serviceable. Overall, the revolver is in Fine condition.

Mechanics: The action functions correctly. The double action is smooth. The cylinder locks with only barely perceptible play on each chamber. We did not fire this pistol. As with all previously owned firearms, a thorough cleaning may be necessary to meet your maintenance standards.

Box Paperwork and Accessories: The revolver comes with a soft case. The case has some light handling wear but it remains in Very Good-Fine condition.

Our Assessment: This Jules Kaufmann & Co. of Liege manufactured Velodog is a double-action only folding trigger revolver chambered for .32 ACP rounds. The reason the revolver has a Lepage marking on the top-strap is because Kaufmann acquired Lepage in 1890 (Kaufmann continued to mark much of its output with Lepage markings). The revolver was manufactured sometime between 1893 (when the crowned oval marked “E /LG / *” was introduced) through 1914 when Germany conquered Belgium in WWI (Kaufmann’s identifier, a crowned “JK”, had a registration with the Liege proof house which expired in 1914). The gun is based upon the popular Velo-Dog style revolver (an acronym for Velocipede & Dog) which was designed by Frenchman Rene Galand. It was intended for use by bicyclists so that they could defend themselves from dog attacks. The Velogog revolvers were characterized by a folding trigger and compact size. This specimen is beautifully crafted with floral scroll engravings and ivory grips. Aside from its aesthetic charm, the revolver also remains mechanically sound. This is a beautifully crafted firearm from Jules Kaufmann that you do not want to miss out on!