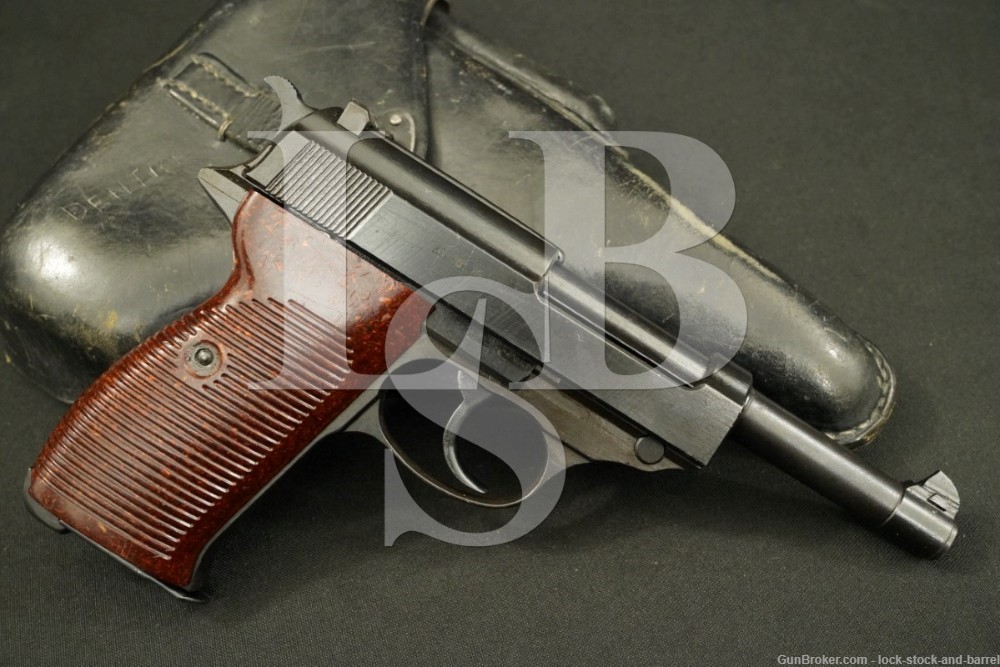 Action Type: Single or Double Action Semi-Auto fed by Removable Magazine (no magazine included). This pistol has a de-cocker safety.

Stock Configuration & Condition: The grips are Julius Posselt two-piece serrated brown synthetic panels. Each panel has five serrations interrupted by the grip screw escutcheon. It is likely that the grips are not original to the pistol as the only records of Posselt production indicate use by Spreewerk, however it is possible that late-war production guns used whatever was on hand. The grips have minor handling wear with a few scattered light marks and a cluster of scratches at the bottom edge of the right panel. There are no chips or cracks. Overall, the grips are in about Fine condition.

Bore Condition: The bore is mostly bright and the rifling is sharp. There is infrequent very minor erosion in the bore.

Overall Condition: This pistol retains about 98% of its metal finish. The finish is strong throughout with a few minor handling marks and faint operational wear. The finish has a plum hue in some areas, typical of late-war production. The screw head is sharp. The markings are clear. Overall, this pistol is in Fine condition.

Box, Paperwork & Accessories: This pistol comes with a black leather flap-holster and a total of two 8-round magazines. The holster is marked “ewx / 1944”, “P.38” and with an incomplete waffenamt on the back. The outside and inside of the flap have been hand-carved with what appears to be “DENTICE”. The holster shows scattered wear and scuffing with intact stitching. One magazine is marked “P.38” on the left, eagle over “359” waffenamt on the spine and “1952 / k” on the floorplate, showing light wear, intact feed lips and a strong spring. Serial-marking of magazines had been discontinued by 1944, this magazine appears to have been force-matched to the pistol or, possibly, is from an earlier pistol with the same serial number. The second magazine is marked with a Walther banner logo over “P38 9mm” on the left and a four-pointed star on the spine, showing minor operational wear, scattered light surface oxidation, intact feed lips and a strong spring.

Our Assessment: The P38 occupies a significant place in history. It was the first locked breech pistol to have a single action/double action trigger. After the start of WWII, Walther could not keep up with the production required, and production was ordered to commence at both Mauser and Spreewerke in 1940. By the end of the war, Walther had only produced about 580,000 of the 1.2 million produced. The ac-44 pistols were produced in 1944 as the ultimate outcome of the war was becoming apparent, even to the Germans. Tolerances were gradually opened to the maximum which could safely be allowed, some small parts which were previously individually marked by inspectors were now left blank, and the quality of the finish gradually declined during the ac-44 production. This example has matching numbers and all the correct markings for a Walther ac44 P.38, showing little evidence of use. The pistol is in Fine condition with about 98% of its finish remaining. The bore is still in nice shape and the mechanics are strong. No collection of WWII small arms would be complete without a P38 made by each of the three manufacturers, and many collectors have one from each year that they were made by each of the three manufactures, in addition to most of the common variants. This pistol is likely to get snapped up by a serious collector of WWII or P38 pistols, but could also make for a fun shooter. Please see our photos and good luck!