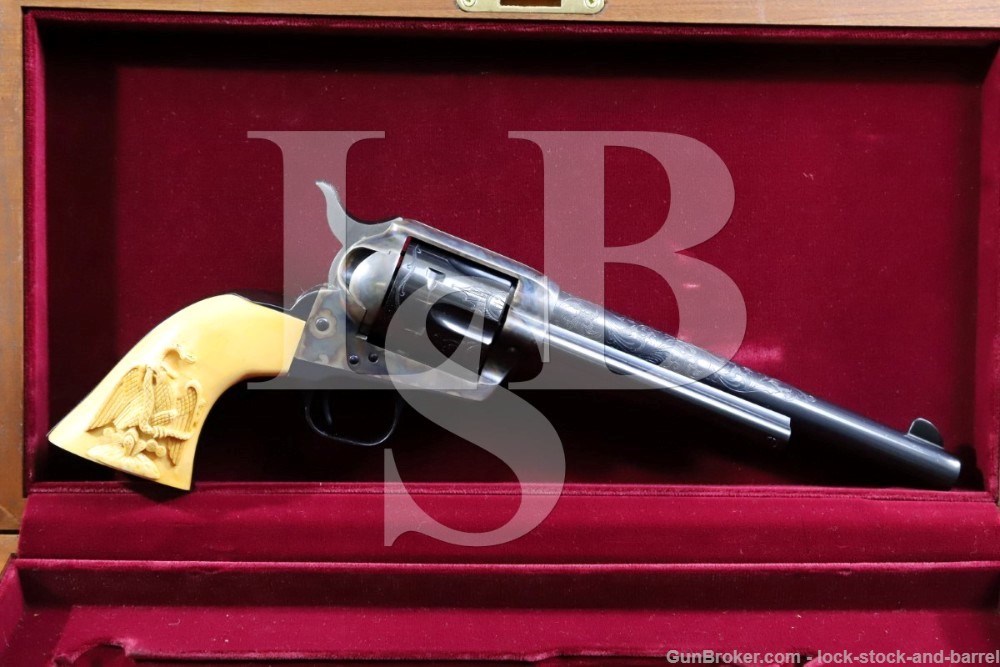 Stock Configuration & Condition: The grips are two-piece synthetic panels which are joined together, presumably with adhesive. The manner of joining the grips appears to be between the mainspring and frontstrap as we were not able to separate the front and backstraps when removed from the frame. The right panel has an embossed Mexican eagle. The grips have light handling wear with some voids in their finish, most notable on the left panel. The eagle has good detail. There are no chips or cracks. Overall, the grips are in about Fine condition as not original to the gun.

Finish Originality: The frame finish appears original. The cylinder is not original to the gun and the barrel and cylinder were refinished when they were engraved.

Overall Condition: This handgun retains about 97% of its current metal finish. The balance is mostly in scattered minor nicks and scuffs, most on the barrel and grip frame. The cylinder has minor turn wear. The screw heads are sharp and there are minor tool marks around some screw heads. The markings are clear. Overall, this revolver is in Fine-plus condition.

Mechanics: The action functions correctly. The cylinder locks up with barely perceptible rotational play on each chamber. We did not fire this handgun. As with all used firearms, a thorough cleaning may be necessary to meet your maintenance requirements.

Box, Paperwork & Accessories: This revolver comes with a Colt display case with red fabric-lined french-fit interior and a key for the case. The case shows minor storage wear with some light nicks and scuffs on the exterior.

Some changes were incorporated in an effort by Colt to keep prices down. One new change was a pressed-in cylinder pin bushing instead of the removable ones used in 1st and 2nd Generation cylinders. Also, the ratchet at the rear of the cylinders was re-shaped, which also necessitated a different shape on the rotating hand. And for some unknown reason, the pitch of the barrel’s threads was changed from the 20 threads per inch (TPI) as used on 1st and 2nd Generation SAAs to 24 TPI for these new ones. The introductory caliber for 3rd Generation SAAs was .45 Colt, but other chamberings would soon follow.

Everyone should have a Colt Single Action Army, and this would be a beauty to add to any collection. Manufactured in 1981, this revolver has decorative engraving and a set of custom grips. Chambered for the classic .44-40 cartridge, this revolver has a 7 1/2″ barrel and displays well in the included case. This classic Single Action Army chambered for a classic cartridge is a nice example of a custom Single Action Army, with an old-west feel and a beautiful overall appearance. It will make a fine addition to any collection. Please see our photos and good luck!