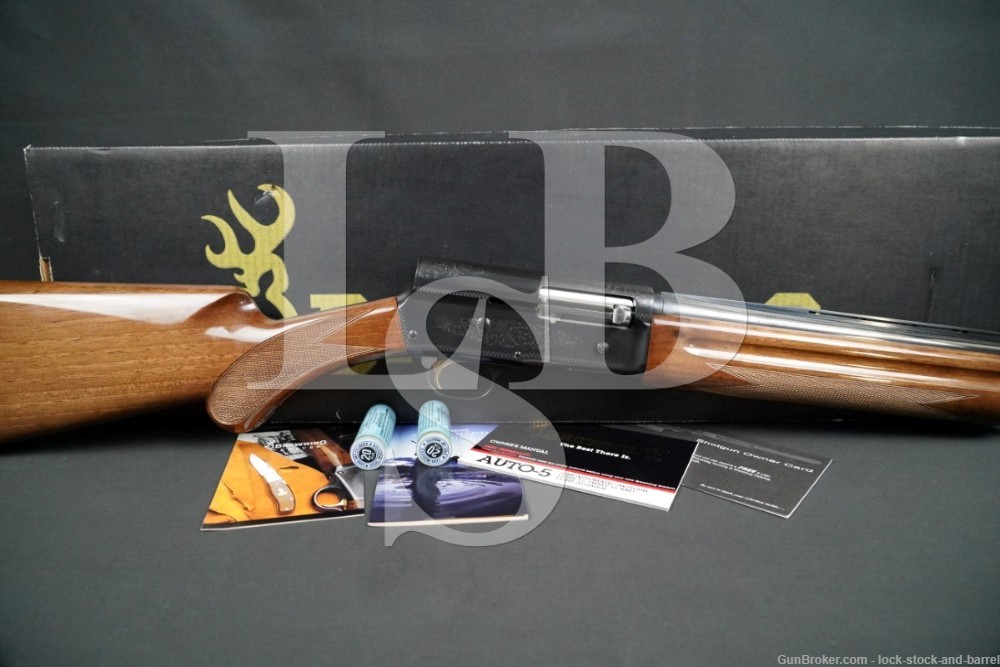 Markings: Left barrel shoulder marked “BROWNING ARMS COMPANY MORGAN UTAH & MONTREAL P.Q. / MADE IN JAPAN”. Right barrel shoulder marked “BROWNING AUTO-5 / * SPECIAL STEEL 20 GA. SHELLS – 2 ¾” – 26” / BROWNING PATENTS”. The left side of the receiver is marked “Light Twenty / ® / BROWNING” with a bust portrait of John M. Browning. The serial number is marked on the underside of the receiver “13250 / NT231”. There is tasteful engraving across the receiver. There is a Browning logo in gold fill on the guard.

Sights/Optics: There is a silver-colored bead at the front of the barrel. The barrel rib is checkered and the receiver is serrated to better reduce glare.

Stock Configuration and Condition: The stocks are a two-piece checkered walnut set with a rounded semi-pistol grip, fluted straight comb, a black plastic Browning buttplate, and finger grooves running the length of the forend. Beyond a small nick on the right side of the buttstock, the wood is otherwise free of any notable wear or damage. The checkering is sharp. There are no chips or cracks. The LOP measures 14 1/4? from the front of the trigger to the back of the buttplate. The plate is free of any notable wear or damage. Overall, the stocks are in Excellent condition.

Bore Condition: The bore is bright and there is no erosion. Some fouling present at the muzzle that should easily swab out.

Overall Condition: This shotgun retains about 99% of its metal finish. Beyond minor evidence of handling marks, the metal is free of any notable wear or damage. The screw heads are sharp with strong slots. The markings are clear. Overall, this shotgun is in Excellent condition.

Box, Paperwork, and Accessories: This a-5 will ship in its serial-matching factory box. Included also are two additional chokes, a choke key, and the manual.

Our Assessment: The Browning Automatic 5, most often Auto-5 or simply A-5, is a recoil-operated semi-automatic shotgun designed by John Browning and was the first mass-produced semi-automatic shotgun in the world. Designed by John Browning in 1898 and patented in 1900, it has been continually produced for nearly 100 total years by several makers with production officially ending in 1998 (though other makers have continued to make the pattern). It features a distinctive high rear end, earning it the nickname “Humpback”. Browning first presented his design to Winchester, where he had sold his rifle designs, but they refused his terms. He then went to Remington, but the president of the company died while he was waiting to offer them the gun. Browning then took the gun to FN in Europe and was so confident that his first order was for 10,000 shotguns. The design was later licensed to Remington for their Model 11 and to Savage Arms for their Models 720 and 755. It is hard to believe that this shotgun manufactured in 1996 was Patented in 1900, and is still being produced today. In 100 years there have been a few changes made. Most are material and finishing process, but otherwise you still have the same classic look and same operators manual. In our opinion you can’t find a more classic design to take on your next hunting trip and always a great reminder of those who taught us how to hunt. This late-era Japanese built example is in sterling shape! Good luck!