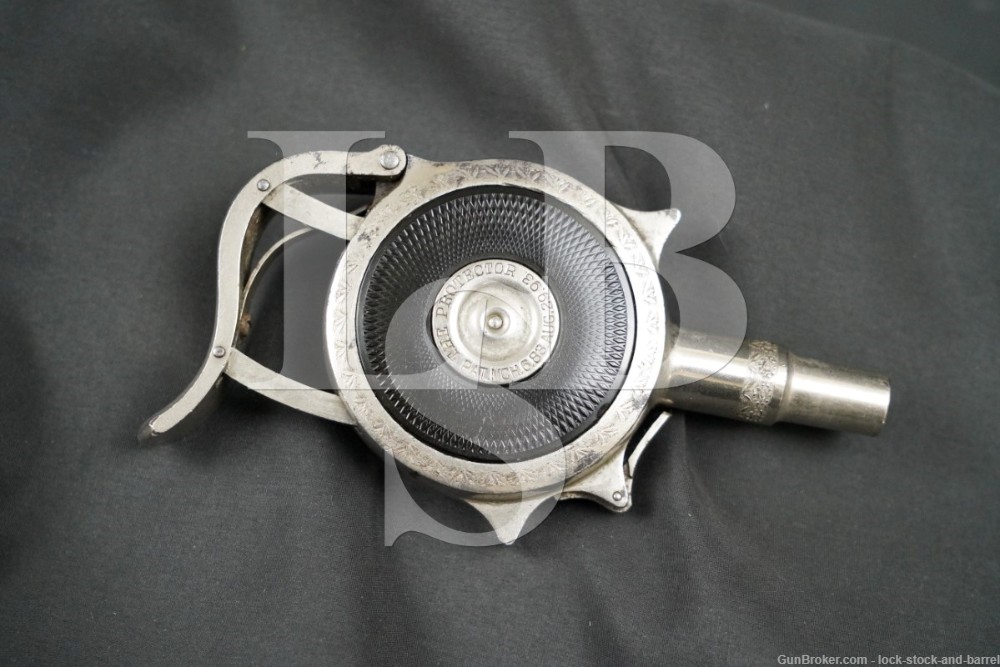 Stock Configuration & Condition: There are checkered black hard rubber discs on each side with finger grooves integral to the front of the housing. The discs show light handling wear with a few areas worn smooth and a couple of light marks. The checkering is generally well defined. There are no chips or cracks. Overall, the grips are in Fine condition as Antique.

Bore Condition: The bore is semi-bright with sharp rifling. There is some scattered light erosion in the bore, most notable in front of the forcing cone.

Overall Condition: This pistol retains about 85% of its metal finish. The most notable finish loss is on the receiver housing in front of the lever/trigger hinge where there is also some light surface erosion and in the knurling around the outside of the removable sideplate. There are scattered spots of finish loss which have discolored from oxidation and there is a patch of erosion on the barrel where its profile steps down. The action shows light operational wear. The markings are clear. Overall, this pistol is in FIne condition as Antique.

Mechanics: The action functions correctly. There is a safety lever at one of the finger grooves by the barrel which must be depressed in order to fully engage the lever/trigger. We did not fire this pistol. As with all used firearms, a thorough cleaning may be necessary to meet your maintenance standards.

Our Assessment: Originally developed by a French inventor named Jacques Turbiaux, the “Le Protector” pistol is a fascinating little machine. Turbiaux made some in France, but soon licensed the design to Peter Finnegan who produced them at his Minneapolis Firearms Company which was then moved and became the Chicago Fire Arms Company which sub-contracted production to the Ames Sword Company. Like many other manufacturers and inventors of the time, Finnegan hoped to take advantage of the Chicago World Fair in 1892 to sell a huge quantity of his Protector palm-pistols, contracting for 15,000 to be made. There were only about 13,000 made, taking some 12 years to sell all that were produced from 1892-1898. While the pistol may look a little odd, it is quite ergonomic and manages to pack seven rounds of .32 Rimfire Extra Short into its radial cylinder. The mechanism is essentially that of any other double action revolver, except that the trigger is a lever on the rear which is engaged by the palm of the hand and the cylinder is radial, rotating around an axis perpendicular to the bore with the cartridges pointing away from the axis of rotation. The sideplate can be removed by rotating it and then the trigger can be depressed slightly to remove the cylinder for loading and unloading. This example has survived the 20th Century quite nicely, retaining the great majority of its original nickel finish and still having a fairly nice bore for a pistol of its age. This fascinating little gun will make a great addition to a collection of pocket pistols and is sure to be a conversation starter with its unique appearance. Please see our photos and good luck!