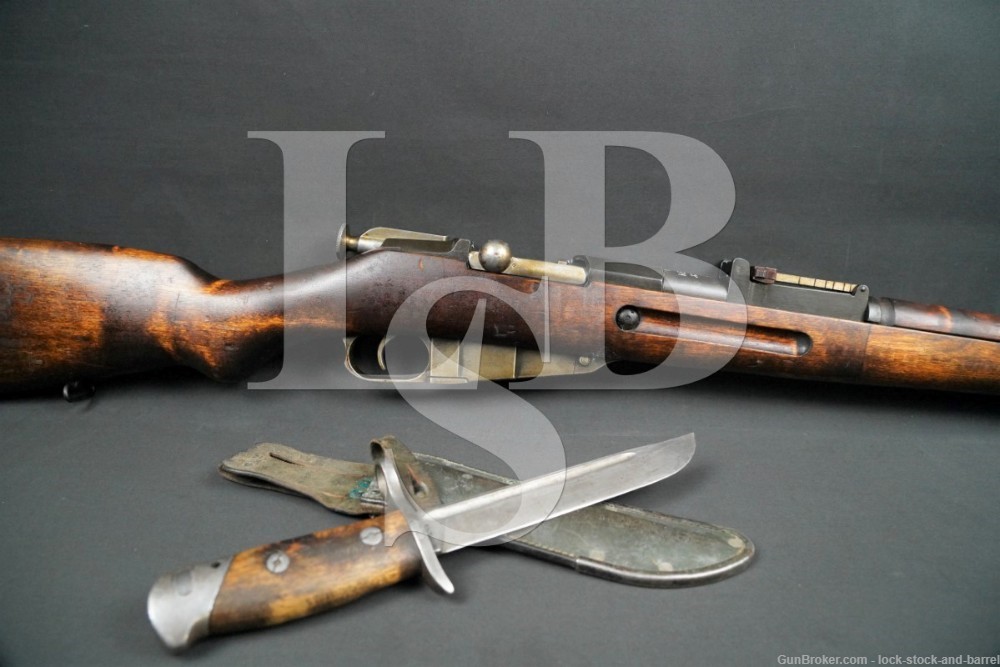 Year of Manufacture: The Imperial Russian Action was manufactured in 1914, and the gun was converted to Finnish specifications in 1942 (C&R).

Markings: The barrel shank is marked with the Sako logo, “SK. Y” abbreviation for the Suojeluskuntain Yleisesikunta or Finnish Civil Guard, “500671” the serial number and “1942” which is the date code. The left side of the barrel shank is marked with a high pressure proof and “SA” in a box (Suomen Armeija or Finnish Army Acceptance mark). The right side of the barrel shank has a Civil Guard proof mark. The top of the receiver has had its Imperial Russian marking removed and it is marked with the serial number (added by the importer). The bolt’s safety has a post-1928 Tula proof mark, a pre-1928 Izhevsk proof on its body, a pre-1928 Tula proof on the bolt connector, a crossed out serial number “113431” on the bolt’s body and  “5017” on the bolt’s knob (the bolt is not serial matched). The magazine has a faded proof mark, and the serial number “3343”. The barrel has the importer’s stamp near the muzzle “M39 FINLAND 7.62x54R / CAI GEORGIA VT ”. The bottom of the action, visible when you take-down the rifle, is marked “1914G” under a pre-Soviet Izhevsk proof mark (1914 Goda or the year 1914). The right side of the butt has the Civil Guard logo above “42”

Stock Configuration & Condition/ Grip: The stock is two-piece smooth wood featuring a handguard, a forend cap with integral bayonet lug on the bottom, a slot for the included cleaning rod, a barrel band with a fixed sling swivel on the bottom and left sides, a barrel band spring, a through bolt, finger-grooves on the forend, a semi-pistol grip, a slightly raised comb, a sling-swivel fixed to the bottom of the butt, a sling-bar on the left side of the butt and a metal buttplate. The stocks have scattered light-moderate handling marks, compressions, nicks and scuffs. The bottom of the forend has “fingers” from the splicing done by the Finnish stock-makers.  Notably, there is a patch repair on the belly. The LOP is 13 3/4” from the trigger to the rear end of the buttplate. The buttplate has finish loss at its top leading edges and is coated in mild surface oxidation. Overall, the stock is in Very Good condition.

Overall Condition: The rifle retains about 70% of its metal finish. There are light handling marks, nicks and scuffs on the rifle’s metal surfaces. Notably, the magazine has no remaining metal finish and it is coated in light surface oxidation. There is also some light wear around the muzzle. The markings remain clear. The screwheads have tool-marks but they remain serviceable. Overall, the rifle is in Very Good condition.

Mechanics: The ejection is weak from stubborn fouling around the chamber. Otherwise, the action functions correctly. The safety works correctly. We did not fire this rifle. As with all previously owned firearms, a thorough cleaning may be necessary to meet your maintenance standards.

Our Assessment: This Finnish manufactured Jalkavakikivaari M39 is a bolt-action rifle with a fixed magazine that takes 7.62x54mmR rounds. The rifle is an example of the unique craftsmanship that defined WWII-era Finnish weaponry. It includes a Finnish made stock but the bolt, magazine and several other components are cannibalized from captured Soviet and old Imperial Russian Mosins. This rifle was issued originally to the Finnish Civil Guard, but based on the “SA” (Suomen Armeija) acceptance stamp the rifle was eventually transferred to the Army. The Civil Guard (also known as the White Guard) were a right-wing paramilitary organization that served alongside the country’s armed forces until it was disbanded in 1947 as one of the provisions of the Finnish-Soviet peace Treaty penned after Finland’s defeat in WWII. The M39 rifle was nicknamed Ukko-Pekka (old-man Pekka) after Finnish President Pehr Evind “Pekka” Svinhufvud who was a key figure in the country’s independence movement following the collapse of the Russian Empire. The heavily modified Mosin Nagant, designated the M39, is a rifle that served the Finnish military well during the Continuation War with the Soviet Union during WWII, many of its parts were obtained from captured Soviet equipment taken during the Winter War in 1940. The M39 remained in service as a training rifle for the Finnish military following the end of the Second World War. This rifle is a masterfully crafted WWII-era Mosin Nagant that you do not want to miss out on.