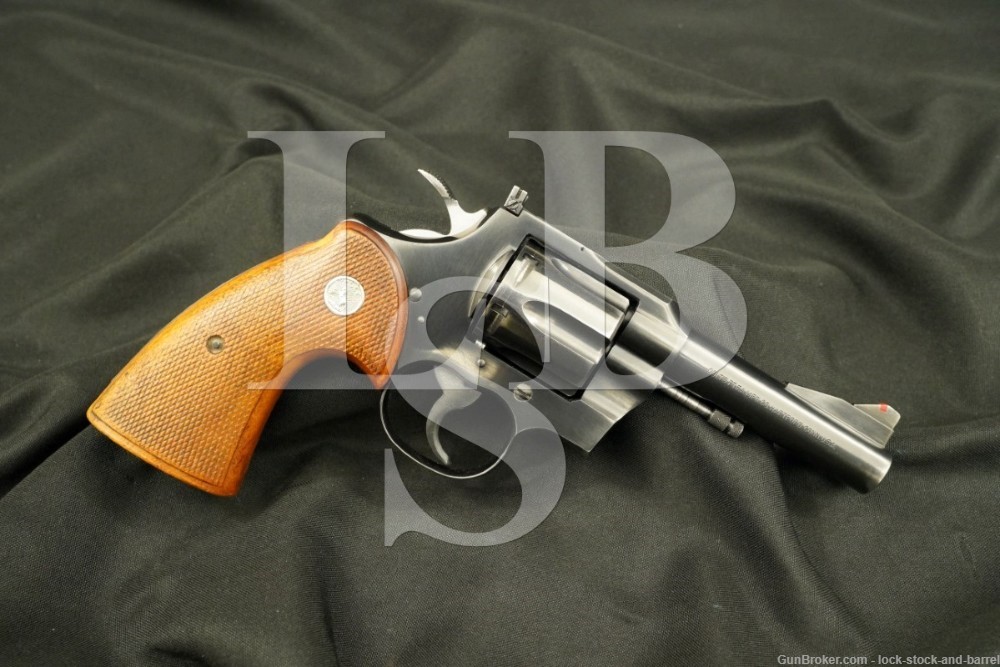 Stock Configuration and Condition: Grips are two-piece wraparound checkered walnut with smooth borders. It appears a finish was applied at some point. Several areas are darker from handling and small nicks and minor compressions can be seen on lower edges. There are no chips or cracks. The checkering is well-defined. Overall, the grips are in Very Good-to-Fine condition.

Overall Condition: This handgun retains about 87% of its metal finish. The cylinder has a turn line through the finish along with minor thinning on most edges, and light nicks and scuffs scattered about. The bottom of the frame and crane arm lug have moderate finish loss. The frame itself has scattered light nicks, spots of minor thinning, and minor tool marks near the screws. The guard has minor thinning on most edges. The barrel has moderate holster wear on either side that resolves into minor nicks and scuffs, with a few spots of finish loss as well. The screw heads are lightly worn with strong slots. The markings are clear. Overall, this revolver rates in Fine condition.

Mechanics: The action functions correctly. The cylinder lockup has some light side to side play. The double action trigger pull is buttery smooth, single action is lightly crisp. We did not fire this revolver. As with all used firearms, thorough cleaning may be necessary to meet your maintenance requirements.

Our Assessment: In its day, Colt’s 357 was the large bore firearm of the line, a deluxe version of the Trooper. Differences were the wide-spur hammer, target stocks, and of course, the .357 Magnum chambering. Introduced in 1954, and later folded into general Trooper production in 1962, Colt would only go on to make 15,000 proper “Three Fifty-Seven” revolvers, which in the grand scheme of Colt production makes this a rare bird indeed. What really ended the 357 was the bite of Python, which when introduced in 1955 gained massive popularity very quickly—a popularity that has hardly ever flagged, effectively relegating the 357 to footnote status. Regardless, this is a rare-ish Colt we’re talking about, and the worst Colt is still miles better than the best Taurus, let’s be honest with ourselves. Completists will want to keep an eye on this lesser known Colt revolver. Good luck and happy bidding!