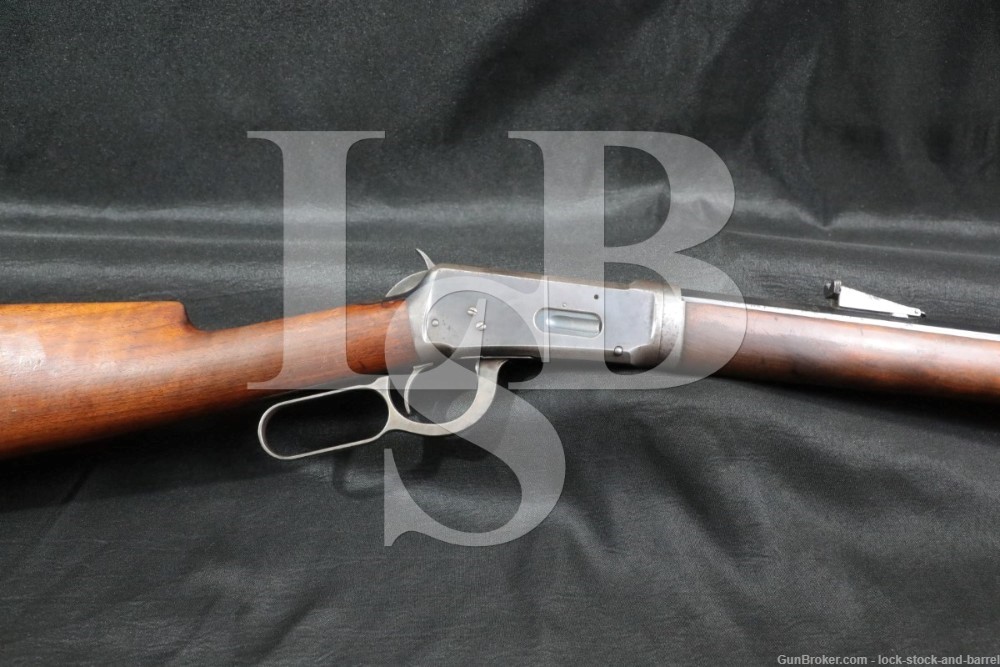 Action Type: This rifle has a takedown lever action with a full-length tubular magazine.

Sights / Optics: The front sight is a German silver blade dovetailed and set screwed to the front of the barrel. The Winchester Smokeless Rear Sight is a semi-buckhorn U-notch sight with an elevator piece that is dovetailed to the barrel. The upper tang has one drilled, tapped and filled hole for installing a tang sight (not included).

Stock Configuration & Condition: The stocks are 2-piece smooth walnut with capped forend, straight grip, straight comb, and steel crescent buttplate. The stocks have some scattered light draglines, compressions and scratches. The bottom of the forearm shows discoloration from age and handling. The plate is slightly shy of the wood. There are no chips or cracks. The LOP measures 13 1/8″ from the front of the trigger to the back of the buttplate. The plate has several nicks and scratches and has worn white. Overall, the stocks are in about Good-Plus condition.

Bore Condition: The lands are somewhat bright and the grooves are dark with erosion. The rifling is well defined.

Overall Condition: This rifle retains about 78% of its current metal finish. The receiver shows significant thinning throughout with nicks and scratches as well as evenly scattered light surface oxidation throughout. There is thinning on the mag tube from contact with the bracket during takedown. There are scattered light nicks, scuffs and scratches throughout the barrel and magazine tube. The leading edges of the barrel have thinned. The lever has worn white and the rear sight shows scattered erosion. The action shows operational wear. The screw heads range from sharp to lightly tool marked with usable slots. The markings are clear. Overall, this rifle is in Good-Very Good condition.

Mechanics: The action functions correctly. The hammer has a half-cock safety and the lever safety functions properly. The trigger is crisp. We did not fire this rifle. As with all used firearms, a thorough cleaning may be necessary to meet your maintenance standards.

Our Assessment: The Winchester Model 1894 rifle followed the other John Browning designed lever action rifles to become one of the most famous and popular hunting rifles of all time. It was the first commercial sporting rifle to sell over 7,000,000 units, making the name “Winchester” synonymous with all lever action rifles. It was also the first commercial American repeating rifle built to be used with smokeless powder. It was introduced in 1894 in two black powder cartridges, the .32-40 and .38-55 Win. rounds, but by the next year Winchester had developed a different steel composition that could handle higher pressures. This is a Winchester Model 1894 rifle made in 1906 with a 26” round barrel and chambered in .32 WInchester Special. The rifle was special-ordered as a takedown, allowing for convenient storage and transport. It is equipped with the Winchester Smokeless rear sight which were specially made for winchesters that were chambered for the new .32 smokeless powder cartridge. This is a great find for the Winchester enthusiast and will sit nicely in your collection. Please see our photos and good luck!