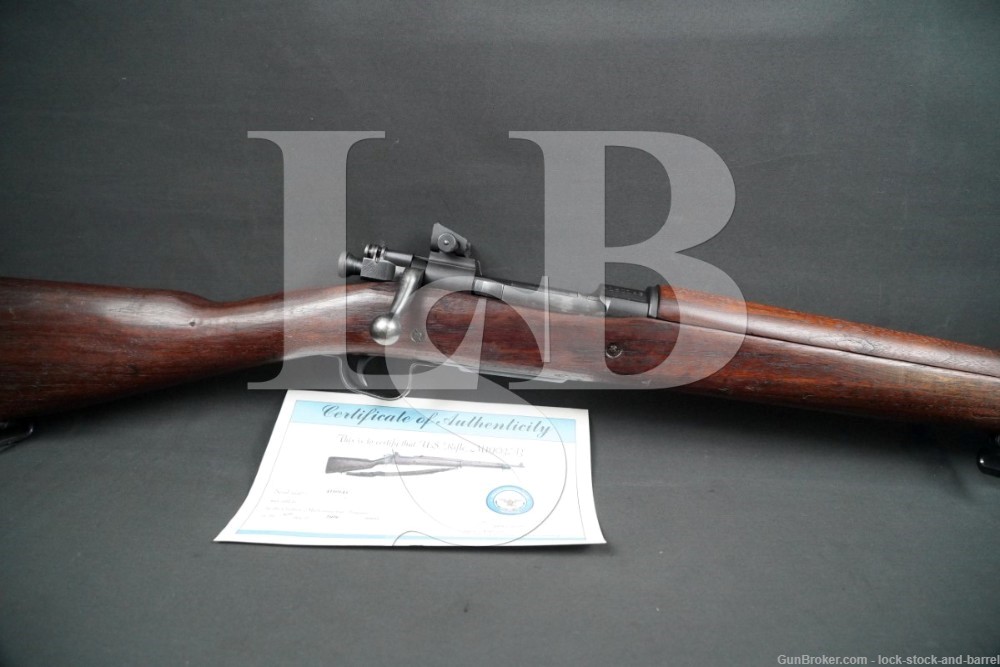 Stock Configuration & Condition: The hardwood stock has a straight grip, metal nose cap with bayonet lug, stacking loop, 2 barrel bands, 2 sling loops, 2 through bolts, and a metal buttplate with hinged door for storage. The buttplate shows scrapes & scratches. The wood shows several scrapes, scratches, and compression marks that have been oiled over. The LOP measures 12 7/8  inches from the front of the trigger to the back of the buttplate. The stock rates in about Very Good overall condition.

Bore Condition: The bore is gray. The rifling is deep. There is erosion in the bore. It is more prominent in the grooves. The bore shows an M.E. of 0.9.

Overall Condition: This rifle retains about 96% of its metal finish as refinished. The metal shows scuffs & handling marks. The barrel and bottom metal show scrapes & scratches. The left rear of the receiver, under the magazine cutoff, shows thinning and discoloration. The bolt shows operational wear. The screw heads show heavy use but are refinished. The markings are deep. Overall, this rifle rates in about Very Good Plus condition as refinished.

Box, Paperwork & Accessories: The rifle comes with a Certificate of Authenticity from the Civilian Marksmanship Program (CMP). The certificate is marked with the rifle’s serial number and a “2002” date. It shows light creasing. It is in Very Good Plus to Fine condition.

Our Assessment:  When the US Army was looking for a rifle design to replace the 1898 Krag rifle, they looked directly at the Spanish Model 1893 Mauser. This was due to the fact that the performance of the Model 1893 Mauser was far superior than that of the 1898 Krag during the Spanish-American War. The Model 1903 is basically a redesigned Mauser clone. A U.S. Patent Court eventually found that the U.S. Army had violated Mauser’s patents and required the U.S. Army to pay the German Mauser manufacturers patent royalties. Payments were stopped once WWI started. The 1903 has a strong reliable action that served the Army for over thirty years in two world wars. The 1903A3 is an improved version of the 1903 rifle that was introduced in 1942. The most significant change was the switch to a receiver bridge-mounted rear aperture sight.
This Remington Model 1903-A3 was made back in 1943. We don’t know its service history but it was most likely put to good use on or near a battlefield. It has nice Remington markings on the receiver and barrel as  well as lots of little “R” stamps onthe metal parts. At some point in its service life the rifle was Arsenal Rebuilt at the Rock Island Arsenal and is marked accordingly on the stock. In 2002 the rifle was purchased through the Civilian Marksmanship Program (CMP). It comes with a Certificate of Authenticity from the CMP. The rifle was refinished after the CMP purchase. This service rifle is almost 80 years old. Its markings tell a story. It will add to your WWII or Military collection.  Good luck.