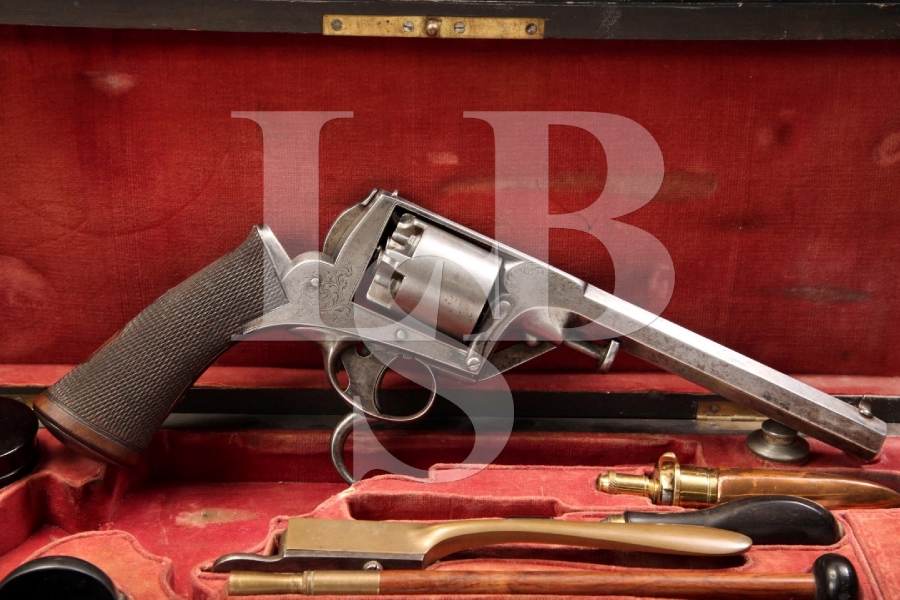 Sights / Optics: The front sight is a blue bead dovetailed to the barrel. The rear sight is a “U” notched leaf fixed to the rear of the frame.

Stock Configuration & Condition: The grip is checkered walnut with a steel end cap and a brass panel on the rear face. The points of the checkering are flattened, and there are areas of surface thinning. The endcap retains a smattering of thinned original surface and is in Very Good condition. The grip rates in about Very Good overall condition as an antique.

Bore Condition: The bore exhibits strong cleaning marks but it bright and the rifling is sharp There is no erosion in the bore.

Overall Condition: This handgun retains about 5% of its metal finish. Small patches of blueing remain on the frame and thin remnants are still apparent on the barrel. Small, scattered, shallow compression marks are visible on the barrel along with two small spots of surface erosion and a small patch of pinprick erosion on the top of the barrel. The lower right face of the frame exhibits several patches of surface erosion. Pinprick erosion is scattered on the surface of the cylinder along with handling marks. The pistol is adorned with scroll engraving on both side of the barrel band, above the grip, the top tang and the front of the trigger guard, which is clear. The screw heads are moderately distressed but serviceable. On the left of the frame, the Adam’s logo is mostly obscured and the Tranter logo is shallow. Overall, this handgun rates in about Very Good condition as an antique.

Mechanics: The action functions correctly in when fired as a double action, but the hammer will not lock back into the full cock position when cocked by the lower trigger. There is a hammer block safety on the left side of the frame, which can be pushed in to prevent the hammer from contacting the caps. When the hammer is cocked, the safety springs out of the way. The loading lever is attached to a post and can be easily removed when rotated into the correct position. The loading lever pivots upward to press the ball into the cylinder. It is held in place by a spring loaded clasp. We did not fire this handgun.

Box, Paperwork & Accessories: The pistol comes in a black lacquered wooden French style case, with a flush mounted brass keyhole, hidden brass hinges and blank brass plaque inlayed into the lid within a gold leaf boarder. There is a crack on the right side of the lid, which shows finish thinning on the right side and marks in the finish throughout. There are scattered compression and handling marks on the sides of the case with some finish loss on the edges between the lid and floor. The interior of the box is covered in burgundy velveteen. Compression marks are visible on the lid from contact with the contents of the box, which fit into compartments on the box floor. The velveteen exhibits signs of use and fading in the color commiserate with the age of the box. The box rates in Good condition. Accessories include an oil well with applicator, a cleaning jag, a nipple wrench, a bullet mold for Minnie ball and round ball, a lead ladle and a wooden rod fitted with a ball cup which unscrews to reveal a ball puller, threaded to accept the cleaning jag. A compartment exists for a screw driver which is not present. The original accessories exhibit very little evidence of handling and the metal surfaces exhibit a natural patina. The accessories are in Fine condition. Also in the box is a powder flask with an adjustable nozzle calibrated in drams. The flask does not appear to be original because of the fit to the case. Handling marks are present on the brass and copper surfaces of flask including a large mar on the copper and finish thinning on the seam. The flask functions properly and is in Good condition. A black plastic accessory / cap box is contained in the case, fitting snugly into the compartment previously occupied by the genuine article. A cache of approximately 30 heavily oxidized .36 cal. Minnie balls resides in a covered compartment to the right of the box. The cover is adorned with an imprinted boarder and the black plastic knob is broken.

s Our Assessment: English gun maker William Tranter began making double trigger, double action revolvers on Adam’s patent frames in about 1852. A 2nd Model was introduced in 1854 with minor improvements such as a detachable loading lever, still on the original Adams frame. Tranter soon moved the 2nd Model pistols onto his own frame design. The Tranter double trigger, double action mechanism was an interesting innovation. The bottom trigger cocked the hammer and rotated the cylinder, and the gun was fired by a light touch of the top trigger. Pulling both triggers enabled the gun to be fired in one motion as a double action revolver. As nifty as the idea was at the time, the two trigger design was inconvenient and in July 1855 Tranter patented a single trigger, double action pistol, some of which found their way to Confederate soldiers during the Civil War and notably into the employ of Allan Pinkerton, founder of the Pinkerton Detective Agency. This is an early 2nd Model Adams/Tranter revolver, on an Adams frame and featuring a detachable loading lever. It retains about 5% of its original finish, but has comparatively little wear or damage. The pistol comes in a black lacquered case with custom fit compartments and includes tools as well a cache of heavily oxidized Minnie balls. The case is in Good condition, the tools are in Fine condition and the pistol itself is in Very good condition. This is a unique and interesting piece of the evolution of the repeating pistol.