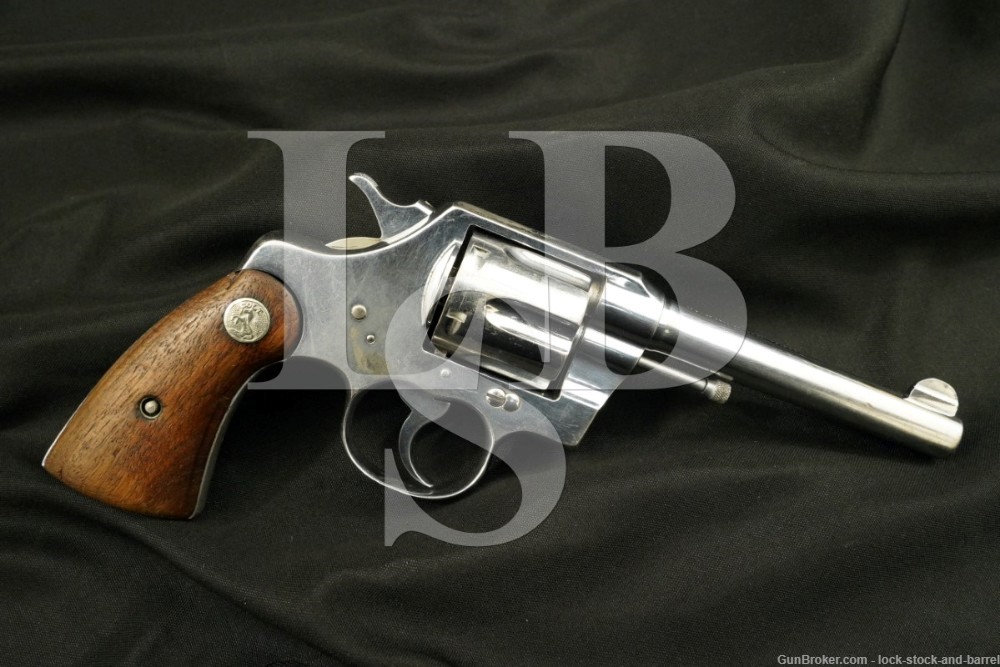 Sights: The revolver is mounted with a square notch in the top strap for a rear sight. The front sight is a wide half round fixed blade on the barrel.

Stock Configuration and Condition: The grips are two-piece checkered walnut panels, each with an inset coin pony at the top. Both panels are heavily worn with channels in the grain greatly exposed. There are minor dings and compressions that dot the panels. The checkering is worn down almost entirely; a bit is still visible in the upper area of the left panel. Overall, the grips are in Fair-to-Good condition.

Bore Condition: The bore is bright with sharp rifling. There is no erosion in the bore, but some light stubborn fouling can be seen in a few spots.

Overall Condition: This revolver retains about 84% of its current metal finish. There are light-to-moderate swirl marks and nicks throughout the chrome finish. Several areas of the barrel and frame have diffuse scuffs. The ridges of the top strap have several spots where the chrome has worn away completely. The cylinder has a turn line. Screws are lightly tool marked. The markings are clear. Overall, this revolver is in Very Good condition.

Mechanics: The action functions correctly. We did not fire this revolver. The double action is smooth, and the single action is light and crisp. As with all previously owned firearms, thorough cleaning may be necessary to meet your maintenance standards.

Our Assessment: The Colt Army Special was introduced with the Army in mind, and quickly came to be noted for its accuracy, winning the National Revolver Match in 1911 and establishing a new range record at Camp Perry the same year. Unfortunately, Colt was never able to interest the Army in a medium framed revolver, and changed its name to the “Official Police” in 1928 after they found that the New York Police Department, among others, were willing to adopt the revolver. Successor to the New Army and New Navy models, the Army Special is easily distinguished from its cousins by way of the modern frame profile, the rounded cylinder latch, and grips which initially were hard rubber (though this revolver has alternative wood grips). The trigger doesn’t have the notched top profile, and the action features the “positive lock”. As mentioned, the Army Special was heavily utilized by police departments, and this example is a chrome version that saw service with the Detroit Police, making for an interesting variant. Good luck and happy bidding!