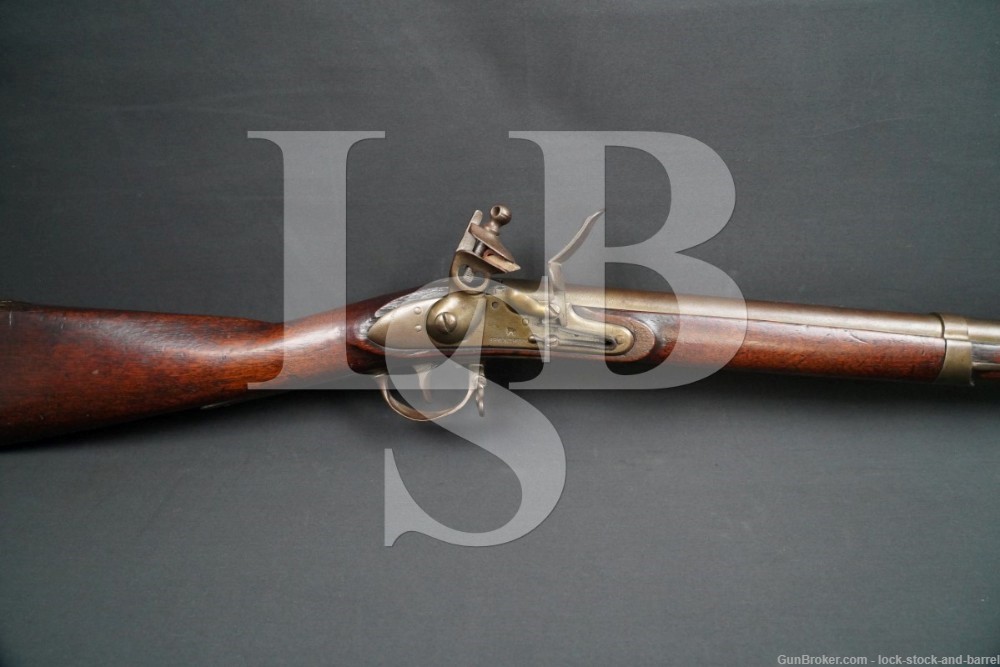 Sights/ Optics: The front sight is a blade integral to the forend cap.

Stock Configuration & Condition/ Grip: The stock is one-piece wood featuring a a metal forend cap secured by a spring, a slot in the forend for the included metal ramrod, two metal barrel bands secured by springs, a lock-plate, a straight wrist, a straight comb and a metal butt-plate. There is a sling swivel fixed to the bottom of the front barrel band and one fixed to the front of the trigger guard. The stock has light-moderate handling marks, nicks and scuffs. Notably, there is a light crack on the left side of the forend which is between the barrel and rear screw on the metal tang. Also, there is a patch repair with wood filler on the left side of the trigger guard with a light crack that extends from the repair to the metal tang on the left side of the forend plus there is a light crack that originates from the top-tang and extends onto the wrist. Additionally, there is moderate wear on the wood surrounding the lock-plate which is concentrated around its rear end. The LOP is 13 3/4” from the trigger to the rear end of the butt-plate. The butt-plate is now patina colored from surface oxidation and has scattered pitting. Overall, the stock is in Good condition for an Antique.

Bore Condition: The bore is dark and coated with scattered erosion throughout.

Overall Condition: The musket has no metal finish remaining. The metal parts of the rifle are coated in mild-moderate surface oxidation and have taken a patina color. There are moderate handling marks, nicks and scuffs on the gun’s metal surfaces. Notably, the rifle has scattered light pitting throughout. The date marking on the top tang is slightly obscured by pitting, but the markings are all still clear. The screwheads have light tool-marks but they remain serviceable. Overall, the rifle is in Good condition for an Antique.

Mechanics: The hammer cocks normally but when the trigger is depressed and action engaged it does not reach the flash pan. There is likely an internal issue with the mainspring. We have not fired this musket. As with all previously owned firearms, a thorough cleaning may be necessary to meet your maintenance standards.

Box Paperwork and Accessories: There is a bayonet lug fixed by the muzzle.

Our Assessment: This is a H. Osborne manufactured Model 1816 U.S. Flintlock Musket, Type II (Colloquially referred to as the Model 1822). Although the lock-plate is marked “SPRINGFIELD” beneath a horizontal eagle’s head, that is not a Springfield Armory marking. It was a mark used by H. Osborne who was a gunsmith based in Springfield, Massachusetts during the early 19th century. Osborne was an independent gun manufacturer who made a number of muskets for the Federal Government and Massachusetts State. It is estimated that approximately 700,000 U.S. Model 1816 muskets of all variations were manufactured, making it the most widely produced flint-lock in American history. The musket’s lineage can be traced back to the US Model 1795, America’s first standardized musket which fired the .69 caliber musket ball (which was the standard ball in use during the early 19th century). The Model 1795 was largely based upon the highly successful French Charleville Musket which had been used by American forces during the Revolutionary War, it included a similar action and fired the same caliber musket balls. There were several muskets manufactured between the production of the M1795 and M1816 but none would be as consequential. The Model 1816 was designed with a slightly superior stock to M1795, an improved lock mechanism and it was fitted for a longer bayonet than its predecessor.  The Model 1816 remained in service from its introduction until the early stages of the Civil War. This particular musket was manufactured in 1828 and it has US Military acceptance marks on the barrel. Unlike many Model 1816s, this musket still retains its original flint-lock action. There is a marking on the butt-plate which appears to have been added long after it was manufactured, “42”, but the rest are original. This specimen also comes with the distinct brass detachable flash pan typically seen on Model 1816 muskets. One oddity with the musket is the barrel length, these were typically manufactured with 42” barrels, but this musket’s is about an inch and a half smaller. The gun is a well preserved Antique which should appeal to collectors of historical firearms. Good luck on your bid!