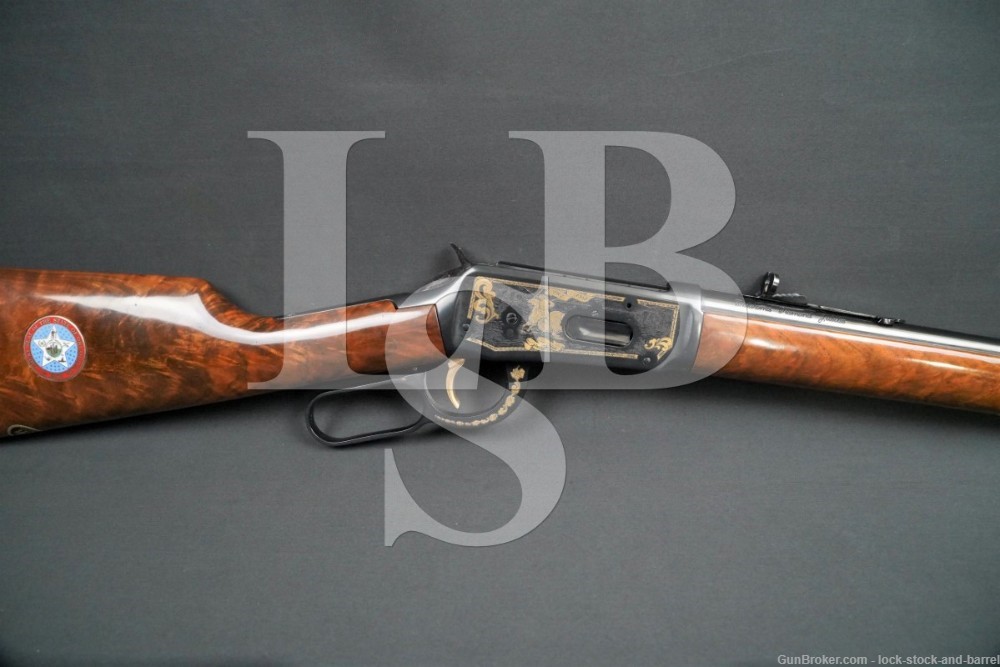 Markings: The left side of the barrel is marked “WINCHESTER- ® -MODEL 94 – .32-40 WIN. / MADE IN NEW HAVEN, CONN. U.S.A. WINCHESTER PROOF STEEL” and the right is marked “Oklahoma Diamond Jubilee” in cursive script. The top rear of the barrel is marked with the Winchester proof. The underside of the receiver is marked with the serial number, “ODJ308”. The lower tang is marked “-Mfd. by U.S. Repeating Arms Co. / –Winchester TM’s licensed from– / –Olin Corporation–”. The right side of the buttstock has the great seal of the state of Oklahoma. The side of the lever have decorative golden floral scrolls. The right side of the receiver has golden borders and floral scrolls alongside a scene of Indians hunting buffalo with golden banners that are marked “1907”, “1982”, and “46th State”. The left side of the receiver also has decorative golden borders and scrolls , the state flag, an engraved scene of a stagecoach, and a golden inlay marked “You’re doin’ fine, Oklahoma! / 1907 Diamond Jubilee 1982” with “75” on an impression of the state. The upper tang is marked “MODEL 1894 / WINCHESTER”.

Stock Configuration and Condition: The stocks are two-piece smooth walnut with a banded forearm, straight grip, straight comb, and gold toned steel buttplate. There is a white scuff on the left side of the buttstock. The wood shows some scattered draglines, nicks, and compressions with some of the more notable on the left side of the forearm. There are no chips or cracks. The length of pull is 13 5/8” from the front of the trigger to the back of the plate. The plate shows light wear along the edges and scattered tiny freckles of oxidation.  Overall, the stocks rate in Very Good-Fine condition.

Bore Condition: The bore is mostly bright and the rifling is sharp. There is scattered erosion in the rear half of the bore that may prove to be stubborn fouling with a more thorough cleaning.

Overall Condition: The rifle retains about 96% of its finish. There are areas that show freckles of light surface oxidation that include the middle of the barrel, the lever plate, the lever and the hammer. Other than the oxidation, there are only some scattered light handling marks. The action shows minor operational wear and there is some light erosion on the hammer . The screw heads are sharp and all markings are clear. Overall, the rifle is in Fine-Plus condition.

Mechanics: The action functions correctly. The lever action is smooth. We have not fired this rifle. As with all previously owned firearms, thorough cleaning may be necessary to meet your maintenance standards.

Our Assessment: This is a beautiful Winchester Model 1894 Oklahoma Diamond Jubilee that commemorates the 75th anniversary of the founding of the Sooner state. The sides of the receiver contain beautiful golden accents inlaid on the sides of the receiver and lever. This rifle retains about 96% of its original finish and much of the light surface oxidation that is present should clean off rather easily. This is a great rifle to add to a Winchester collection, especially if you live in the great state of Oklahoma! Please see our photos and good luck!