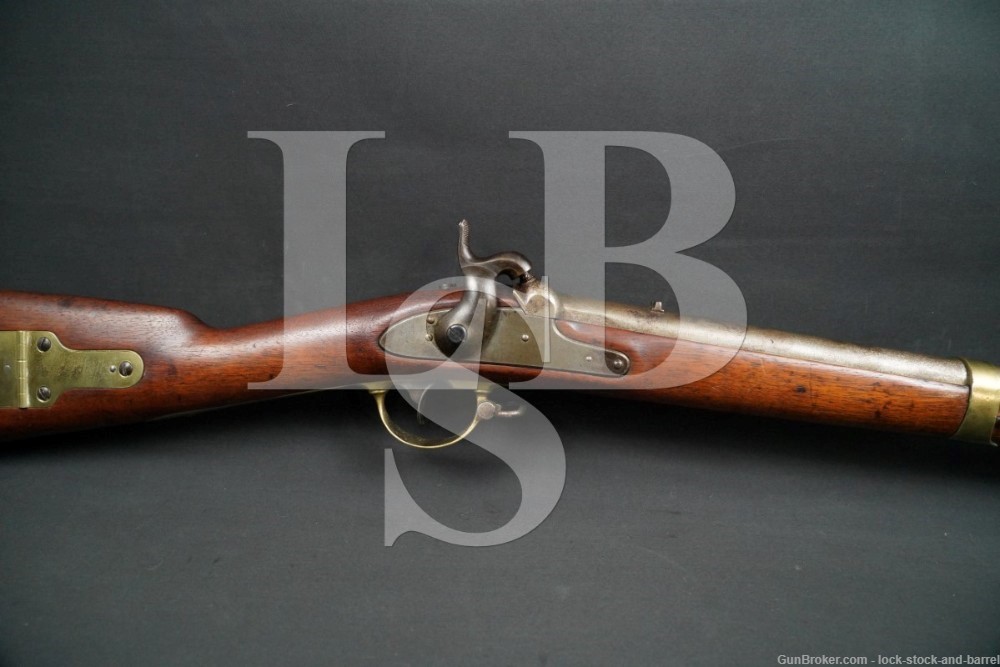 Stock Configuration, and Condition: The stock is a one-piece smooth wood with a large patch-box on the right side, brass mountings, blued screw heads, straight comb, straight grip, ramrod groove with a steel trumpet-head ramrod. There are sling swivels on the front of the guard and on the underside of the forward brass mounting. There are light-to-moderate nicks, dings, and compressions scattered throughout the stock, the majority of which have been oiled over. There are a handful of larger, more notable dings and compressions on either side of the buttstock. There are no chips or cracks. The LOP is 13 1/2” from the front of the trigger to the back of the buttplate. The plate has light dings throughout with minor nicks dotting the outer edge. Overall, the stock is in Very Good-plus condition, as antique.

Bore Condition: The bore is only semi-bright and the rifling is well-defined. There are spots of light erosion scattered about along with light stubborn fouling throughout the bore.

Overall Condition: This rifle retains about 5% of its metal finish. Much of the brown finish has worn away and the remainder visible can not be easily differentiated from patina. There is light-to-moderate pitting from erosion and oxidation scattered throughout the metal with the heaviest instances being near the hammer and nipple. There is scant indication of case hardening on the lock plate, but some swirl is still evident; the plate has otherwise shifted to a darker patina, as has the hammer and trigger. Brass mountings have light nicks on most edges. Sling swivels have light surface oxidation throughout. Screws are very lightly tool marked with strong slots and markings are generally clear. Overall, this rifle is in Good-to-Very Good condition, as Antique.

Mechanics: The action does not function correctly. The hammer does not remain locked when pulled back all the way; it will remain in the 1/4” safety position. We did not fire this rifle. As with all used firearms, thorough cleaning may be necessary to meet your maintenance standards.

Our Assessment: Eli Whitney began work under his new contract with the U.S. government making the model 1841 percussion rifle when he took over management of the Harper’s Ferry armory in 1842, bringing along with him Thomas Warner, former master armorer at Springfield Armory. The 1841—or “Mississippi”, or “Yagger”—rifle was the first standardized U.S. arm to utilize a percussion lock system. While a great many were made at Harper’s Ferry, a great many were made under contract by concerns such as Remington, Palmetto Armory, Tryon, and like this example, Robbins & Lawrence, who would make a total of 15,000 between 1848 and 1853. One would think this rifle would be better referred to as the “Vermont” or “Connecticut” given its origins, but the “Mississippi” name is actually derived from its role in the Mexican-American war, where its use resulted in a lifelong feud between future president Jefferson Davis and Colonel Winfield Scott. Often considered the most handsome of all percussion rifles, it seems worthy of the praise even today, and any collector of historical arms will want to train a keen eye on this example, that while missing a great deal of finish is in mostly good working order. Good luck and happy bidding!