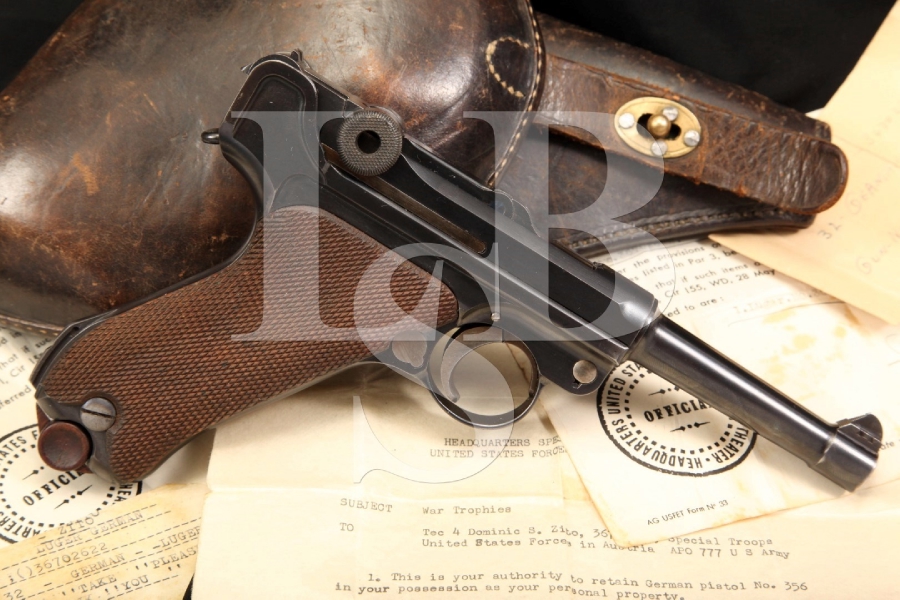 Year of Manufacture: circa 1920

Sights / Optics: The pistol is mounted with a “V” notch in the back of the toggle and a serrated ramped blade front sight in a dovetail on the front barrel band.

Stock Configuration & Condition: The grips are checkered walnut. The grips show light wear with minor mars in the center of the right grip. The grips are tight on the frame. The grips rate in about Excellent overall condition.

Type of Finish: The pistol is blue. The trigger, takedown lever, safety and ejector are a straw color.

Overall Condition: This pistol retains about 94% of its metal finish. There are spots of thinning on the edges of the front barrel band and on the front edges of the frame. There is a small spot of pinprick surface erosion on the right rear of the barrel band and another on the left side of the barrel half way along its length. The left side of the frame at the takedown lever and the lever itself show a few small compression marks and there is a single small compression mark on the top right edge of the receiver. There are several handling marks in the front strap and a small compression mark and tiny spots of surface frosting in the backstrap. There are marks through the finish on the back of the rear toggle and a small spot of erosion on the left rear of the frame. The left side of the frame shows a light mark from the safety. There are small spots of thinning on the toggle knobs, safety serrations and the checkering of the takedown lever. The safety, magazine release, and takedown lever are sharp and the toggle knob serrations show slight wear. The grip screws are sharp but show thinning. The markings are clear and sharp. Overall, this pistol rates in about Fine condition.

Mechanics: The action works correctly. We have not fired this pistol.

Box, Paperwork & Accessories: This pistol comes with one magazine, two original “Bring Back” certificates and a brown leather holster from a French Model 1892 Lebel revolver. The magazine has a phosphate finish and a correct wooden bottom piece. There are no markings on the magazine. The magazine shows light wear and tiny compression marks on the left side of the bottom piece. The magazine is in about Fine condition. The certificates show that a Luger pistol with serial number 356 and a leather holster were captured enemy equipment and were being returned to the United States from the U. S. Forces European Theater. The certificates have been folded several times and have slightly frayed edges and oil staining, but are intact with no tears and in about Very Good to Fine condition. The holster is a brown clamshell type. The hard top is secured to the holster section with a leather hinge. There is a large pouch secured to the front of the holster for storage of ammunition and the individual loops normally in the pouch have been removed. The pouch has its own leather top flap which is secured by a hole in the flap and a brass stud on the pouch. There is a leather closure strap sewn to the inside surface of the clamshell that has an oval shaped piece of brass riveted to it with a keyhole shaped hole that slips over a brass stud on the bottom front of the holster. There are two short straps sewn to the top back side of the holster with rectangular brass rings for attaching a shoulder strap. There is also a single wide belt loop sewn to the back side that will accommodate belts up to about 3” wide. The inside of the clamshell has a circular makers mark with the words “FAUC CHOLLET / NANTES” around the perimeter and “2 14” in the center. The leather shows numerous scuff marks and handing marks. The rear surface of the hinge shows surface loss, as does the top of the belt loop and the leather loops holding the rectangular brass rings. There is a deep compression mark in the ammunition pouch. There are no cracks noted and the stitching is intact except for inside the ammunition pouch where the loops were removed. Overall, the holster is in about Very good condition.

Our Assessment: This is a DMW Commercial 1920 pistol with matching numbers on the barrel, receiver, rear toggle, takedown lever and left side plate. Normally, the Commercial 1920 pistols are not the most collectable because of the numbers in which they were produced, but this pistol retains about 94% of its original finish and is rated in about Fine overall condition. It is not very often you find a Luger in such nice condition. Please see our pictures!! Even the bore is bright with sharp rifling. The pistol comes with two original certificates showing that this is a “Bring Back” from the European Theater of World War II, and includes a French brown leather holster from a Model 1892 Lebel revolver. The Luger fits well in the holster, but the strap on the clamshell must be pulled very tight to get the hole in the brass fitting over the stud in the holster. This package should rate serious collector interest.