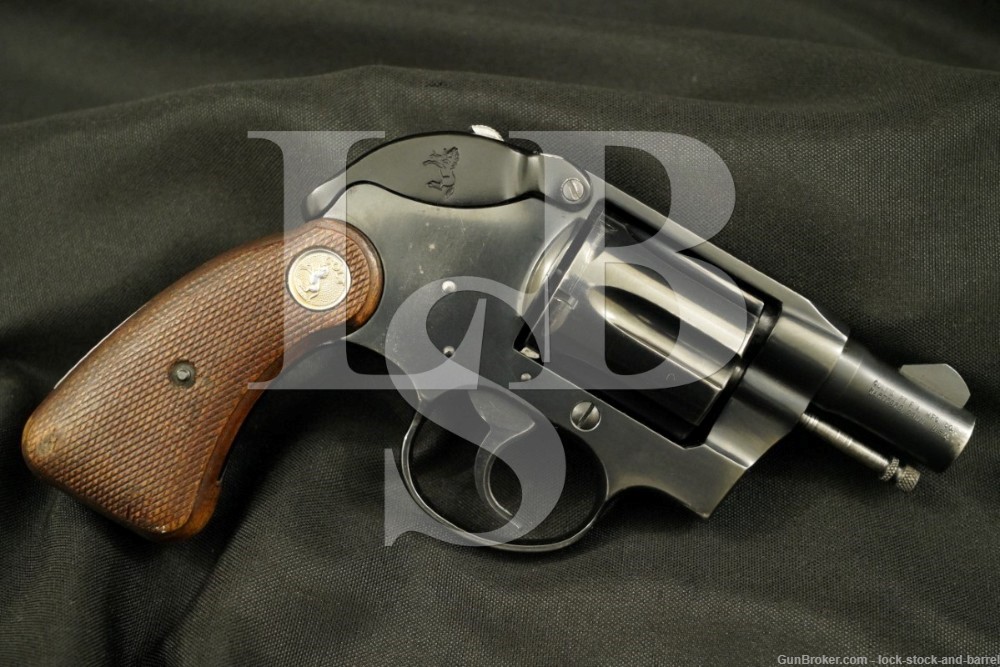 Year of Manufacture: 1964-1967, confirmed by the COLT Serial Number Database.

Markings: The left side of the barrel is marked “DETECTIVE SPEC. / .38 SPECIAL CTG.”, the right is marked “COLT’S PT. F.A. MFG. CO. / HARTFORD, CONN. U.S.A.”. The side plate has the Rampant Colt logo at the center. The left of the trigger guard is marked with “VP” in an inverted triangle at the front, and the rear is marked with “B”. The crane and cut are marked with the serial number, “951076”.

Sights/Optics: The front sight is a serrated ramped blade integral to a boss that is fixed to the top of the barrel. The rear sight is a matte groove in the top strap that terminates in a square-notch. The upper edges of the top strap are serrated to reduce glare.

Stock Configuration and Condition: The grips are two-piece checkered wood panels, each with a Colt logo medallion at the top. Fitted over the hammer is a hammer shroud to prevent the hammer from catching on clothing while still allowing thumb actuation. There are several light white marks and the smooth areas have a few light nicks and scuffs. The checkering is well-defined. There are no chips or cracks. Overall, the grips rate in Very Good-to-Fine condition.

Bore Condition: The bore is bright and the rifling is sharp. There is no erosion in the bore, but a small bit of light stubborn fouling can be seen in spots.

Overall Condition: This handgun retains about 93% of its metal finish. Very minor nicks are peppered across the metal, minor surface oxidation can be seen on the side plate. The cylinder has a faint turn line along with moderate thinning on most edges. The barrel has moderate holster wear on the left side. The screw heads are lightly tool marked but have strong slots. The markings are clear. Overall, this revolver rates in Fine condition.

Mechanics: The action functions correctly. The cylinder produces solid full lockup on all six chambers. The double action trigger pull is smooth mostly, but a little heavy just before the break. The single action pull is light. We did not fire this revolver. As with all used firearms, thorough cleaning may be necessary to meet your maintenance requirements.

Our Assessment: The Colt Detective Special was in many ways the same revolver as the Police Positive Special, except it was limited to a 2” barrel (very few were produced with 3” barrels). The Colt Detective Special and its aluminum framed cousin, the Colt Cobra, were very popular with police detectives because they held six cartridges versus the five cartridges of the Smith & Wesson Model 36. The Detective Special had a long production run, from 1927 to 1995, a testament to its popularity. This example is from later in production, almost near the end, in 1964-1967. The revolver is chambered in .38 Special with a 2 barrel. The revolver is in Fine condition, retaining nearly all of its blued finish and showing signs of regular, considerate use. The mechanics are tip-top and the bore is very clean. A previous owner added a hammer shroud to prevent the hammer from catching on clothing while still allowing thumb actuation, making this revolver a truly great conceal carry firearm. Good luck and happy bidding!