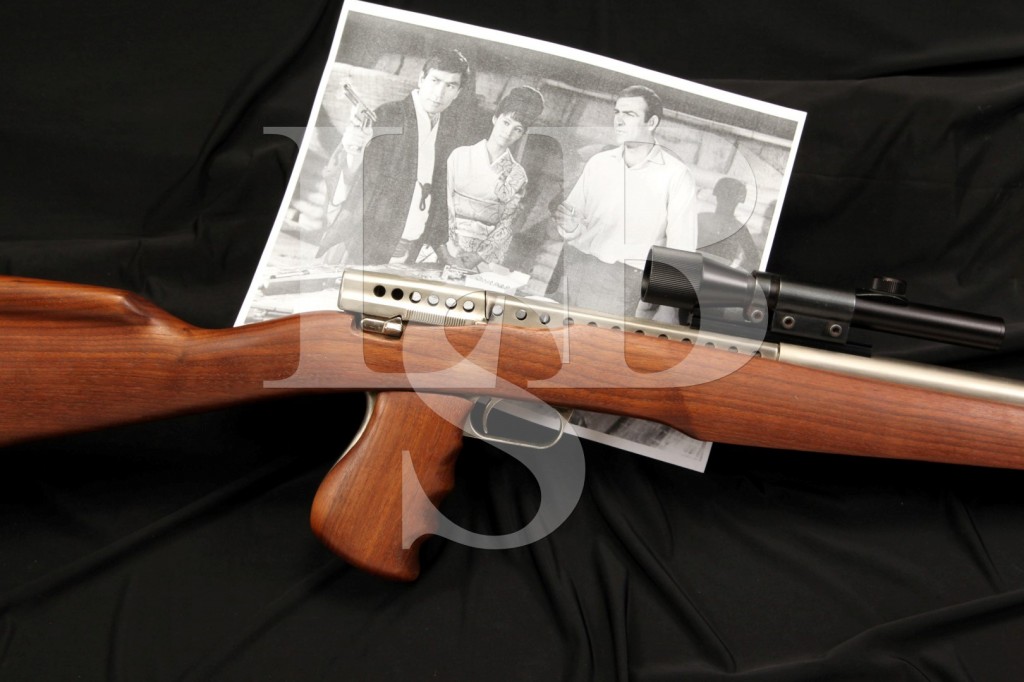 Markings: The top of receiver reads “MBAssociates San Ramon, Calif. B0206 / MARK I MODEL B 13mm GYROJET ROCKET CARBINE”. The recoil pad is marked “WHITE LINE / Pachmayr GUN WORKS” with the address. The top of the scope is marked “B in crosshairs”.

Barrel Length: Approximately 18 ½” to the end of the flared muzzle.

Sights / Optics: There are no iron sights. The top of the barrel has 4” of rail attached to it by two screws. A one piece scope mount uses three screws to hold the Bushnell Phantom 1.3 power scope. The scope has a duplex reticle. The glass appears clear. The mount and rail show only light handling marks. The tube shows a few light marks. The rail, mount and scope are in about Fine to Excellent condition.

Stock Configuration & Condition: The two piece, straight grained, semi-gloss finished, hardwood stock has a pistol grip with finger grooves, raised cheek piece, beavertail forearm, cutout on the right for the slide release lever, two cutouts on the left for the cocking lever (forward) & the slide lock lever (rear) and a hard rubber recoil pad with white line spacer. There are only minor handling marks on the wood. The LOP measures 15 ¼” from the front of the trigger to the back of the recoil pad. The stock rates in about Excellent overall condition.

Bore Condition: The smooth bore is bright. There is no erosion.

Overall Condition: This rifle retains about 95% of its metal finish. The barrel shows a few light scrapes and small scratches. There is a small amount of fuel residue on the slide and receiver to the rear of the circular vents. The slide shows some oxidation. The screw heads are intact but show some oxidation. The markings are clear. Overall, this rifle rates in about Fine to Excellent condition.

Our Assessment: This is a RARE find. The MBAssociates Gyrojet Mark I Model B Rocket Carbine was not a success with the military but it is a great futuristic looking rifle that has turned out to be quite the find for collectors. This one comes with a Bushnell scope and a great looking stock just like it left the factory. Gyrojets were tested in Vietnam and were featured in the 007 movie You Only Live Twice. Check out the Gyrojets laid out in front of 007 in this photo and read the article for more at https://medium.com/war-is-boring/this-handheld-rocket-gun-peaked-with-a-james-bond-cameo-730306edb6e3. Here are some basics from: http://milpas.cc/rifles/ZFiles/Odd%20Fellows/Gyrojet/Gyrojet.htm: “Gyrojet weapon was one of the rare attempts to develop an entirely different weapon with some unique properties. This weapon tried to achieve several goals, including the low noise of firing and underwater fire capabilities, along with significant firepower and penetration. In doing so, it was far from any conventional firearms; in fact, it was a hand-held, multi-shot rocket launcher… Each projectile contained its own rocket engine and means for stabilization – either in the form of retractable fins or in the form of inclined jet nozzles which forced the missile to rotate, and thus provide gyroscopic effect for stabilization. Each rocket “motor” burned for about one tenth of a second; maximum velocity of about 380 meters per second (~1250 fps) was achieved at ranges about 20 meters from muzzle, while muzzle velocity was as low as 30 meters per second (~100 fps). Because of that slow acceleration the Gyrojet was almost useless a weapon at short ranges, within 5-7 meters….The Gyrojet launchers were made in the form of a large pistol (or carbine). Frame was made from aluminum alloy, with perforated “barrel” which served as a launching guide for rockets. Up to six rockets were stored in integral, single stack magazine located in the grip; magazine was loaded from the top, through the slide-open cover. After loading, top rocket remained in the “barrel”, resting against stationary firing pin, set into the rear of the barrel tube. Once trigger is pressed, it releases the hammer, which rotates back and hits the nose of a rocket, pushing it toward the stationary firing pin. Primer in the base of a rocket ignites the rocket charge, and sends the projectile accelerating down the “barrel” tube. This movement cocks the hammer and also frees the space for next rocket to rise from magazine into firing position. To provide necessary means for cocking the hammer for first shot, it has been fitted with side extension that projected outside of the frame from the curved cut on the left side of the frame”. You too can legally own a semi auto-rocket launcher. Good Luck. Sorry no C&R. This rifle may be over 50 years old, but we will only ship to a 01 FFL.