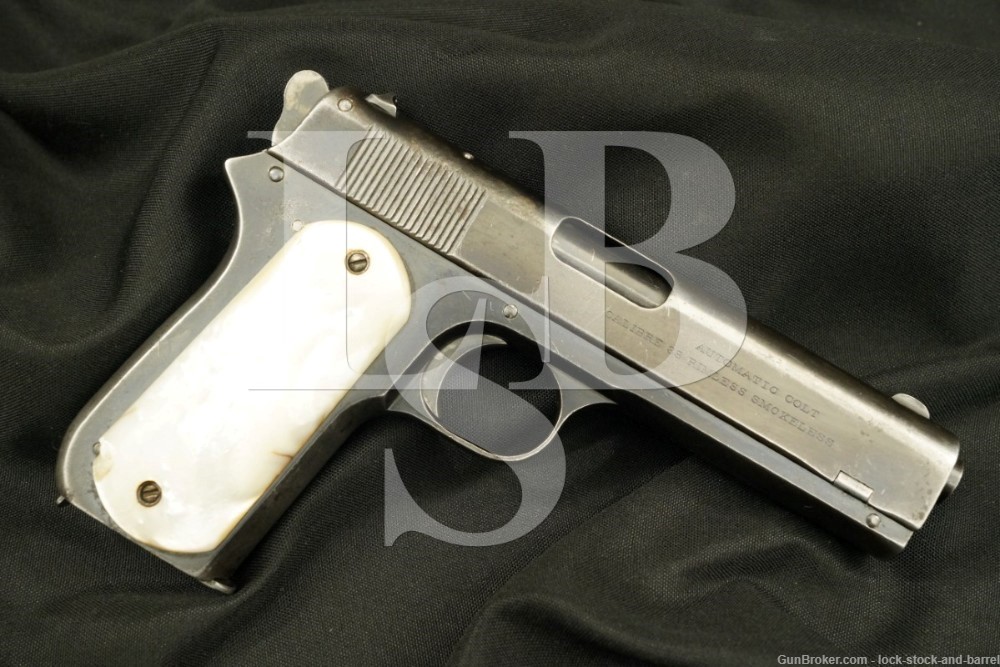 Year of Manufacture: According to Colt, this pistol was made in 1903 (https://www.colt.com/serial-lookup), per Douglas Sheldon’s “Colt’s .38 Automatic Pistols”, this pistol most likely shipped in 1906. Based on the presence of the Verified Proof, 1906 is most likely correct as the marking was introduced in 1905.

Stock Configuration and Condition: The grips are two-piece pearl panels. The right panel has a chip-loss at the bottom-right by the magazine catch pin. At the front edge of the right panel, there is a thin line of discoloration which may appear as a crack in the photos. Running a fingernail across this line, it does not catch, it may be a part of the natural grain or a sub-surface crack, but the exterior is not cracked. There is a similar line on the rear edge above the chip-loss. At the top-rear of the right panel, it is not clear if there is a small loss or an intentional notch at the sear pin. There are scattered minor nicks and scratches, including tool marks at the grip screw escutcheons. Overall, the grips are in Good-plus condition.

Bore Condition: The bore is gray with well defined rifling. There is scattered light erosion in the bore with infrequent minor pitting.

Overall Condition: This 1903 Pocket Hammer retains about 77% of its metal finish. The finish is thinning at all edges. There is handling wear in the grip areas and scattered light finish wear on the slide. There are several scattered nicks, scuffs and scratches with a cluster of concentrated nicks on the right of the frame between the sear pin and hammer screw. There are tool marks at most pin heads as well as at the slide wedge. The action shows operational wear. Some worn areas show light oxidation and there are a few spots of light surface erosion. The pin heads range from unmarred to tool marked and slightly peened. The screw heads range from sharp to tool marked with serviceable slots. The markings are clear. Overall, this pistol is in about Very Good condition.

Mechanics: The action functions correctly. The slide has very little play to the frame. The trigger has a slight take up followed by a very light break. This pistol does not have a safety other than a half-cock position on the hammer. The magazine release is at the heel. This pistol has a rounded spur hammer. We did not fire this handgun. As with all used firearms, a thorough cleaning may be necessary to meet your maintenance standards.

Box, Paperwork, and Accessories: This pistol comes with one (1) 7-round magazine. The magazine has strong finish on and near the floorplate with most of the body’s finish muted,  showing operational wear and some minor oxidation. The feed lips are intact and the spring is strong.

Our Assessment: The Colt Model 1900 was the first automatic pistol manufactured in the United States and marketed in an environment still oriented to revolvers. Self-loading pistols had been manufactured for several years in Europe but were hardly accepted in the year 1900 when Colt began selling this John M. Browning designed pistol. Browning was nothing short of a genius in firearms design and associating with the marketing and manufacturing abilities of Colt’s Firearms ensured the eventual acceptance of the automatic pistol design. The 1900 underwent continuing design changes, becoming the 1902 Sporting and Military Models. The success of these pistols led Colt to believe that a smaller version was in order, a pistol that could be carried in a pocket or holster. This spawned the 1903 Pocket Hammer, which was essentially just a shortened version of the M1902 and made with much of the existing tooling. The Colt Pocket Hammer has a shortened 4 1/2” barrel, but like its big brother it lacks an external safety and has a seven round magazine with heel release. One noticeable change from the M1902 pistols was the slide serrations, which were moved to the rear of the slide. Colt manufactured about 31,250 of these pistols. Even though the 1903 Pocket Hammer was the most successful of the .38 ACP pistols, its success paled in comparison to the hammerless .32 ACP and .380 ACP models 1903 and 1908 hammerless models that were to follow. Production of the M1903 slowed during WWI and surged in 1920, but then fell off—people were gravitating either to the larger M1911 for knockdown power or to the hammerless pistols for concealability. This M1903 Pocket Hammer pistol was made around 1906 and is in Very Good condition with much of its original finish remaining. The bore is still pretty strong as are the mechanics, with a nice trigger and smooth operation. This model, along with its M1900 and M1902 predecessors, is a must-have amongst Colt collectors as being one of the first of the Colt semi-automatics. Good luck and happy bidding!