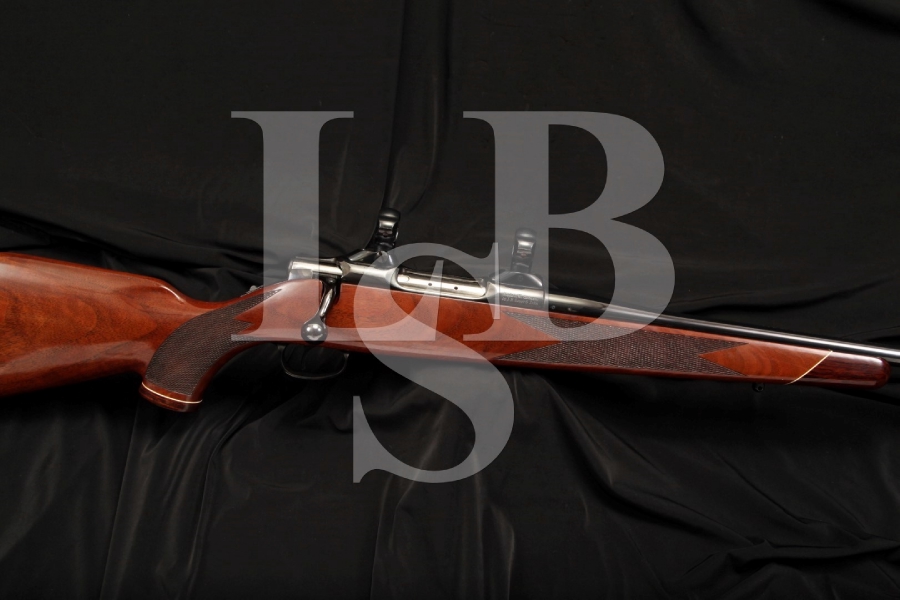 Sights / Optics: There is no provision for open sights. The rifle is equipped with 1” scope rings mounted on the receiver.

Stock Configuration & Condition: The one piece lacquered walnut skip line checkered pistol grip stock has rosewood endcaps, a cheekpiece for right handed shooters and a Monte Carlo comb. The checkering is flattened in the areas where the rifle would rest in a right handed shooter’s grasp and very sharp elsewhere. There are a couple mars in the checkering on the left side of the forend. Aside from a few scattered shallow compression marks, the stocks exhibit light evidence of handling. There is an eggshell colored border between the rosewood endcaps and the stock. The grip cap displays a Rampant Colt on a black background. The finish over the emblem show light scratches. A sling swivel stud is mounted on the butt and forend. The LOP measures 13 ½” from the front of the trigger to the back of the vented rubber recoil pad which was made by Pachmayr for Colt and sports a Colt Sauer logo. The recoil pad exhibits handling marks on the toe and is in Fine condition. The stock rates in about Fine to Excellent overall condition.

Overall Condition: This rifle retains about 99% of its metal finish. Aside from a tiny mark through the finish and an area of mild finish thinning on top of the barrel, and a cluster of lines in the finish just forward of the bolt, there is very little evidence of use. The screw heads are sharp. The markings are clear. Overall, this rifle rates in about Excellent condition.

Mechanics: The action functions correctly. The rifle is equipped with a 4-round detachable magazine which is marked “COLT SAUER / Cal .243 Win.” The magazine is blue and exhibits handling marks and several small spots of surface erosion on the floor plate. The magazine rates in Fine condition. We have not fired this rifle.

Our Assessment: From 1974 to 1985, Colt contracted J.P. Sauer and Sons to make a high quality bolt action rifle and Sauer came through, manufacturing the Colt Sauer in several action lengths. This is a Short Action model chambered in .243 Winchester. The unique non rotating bolt makes cycling this rifle smoother than most. The .243 Winchester round was developed in the 1950s and is useful for varmint control and taking of small to medium sized game. This rifle is very attractive and in Excellent condition and with the addition of a scope should be a fine, reliable shooter.