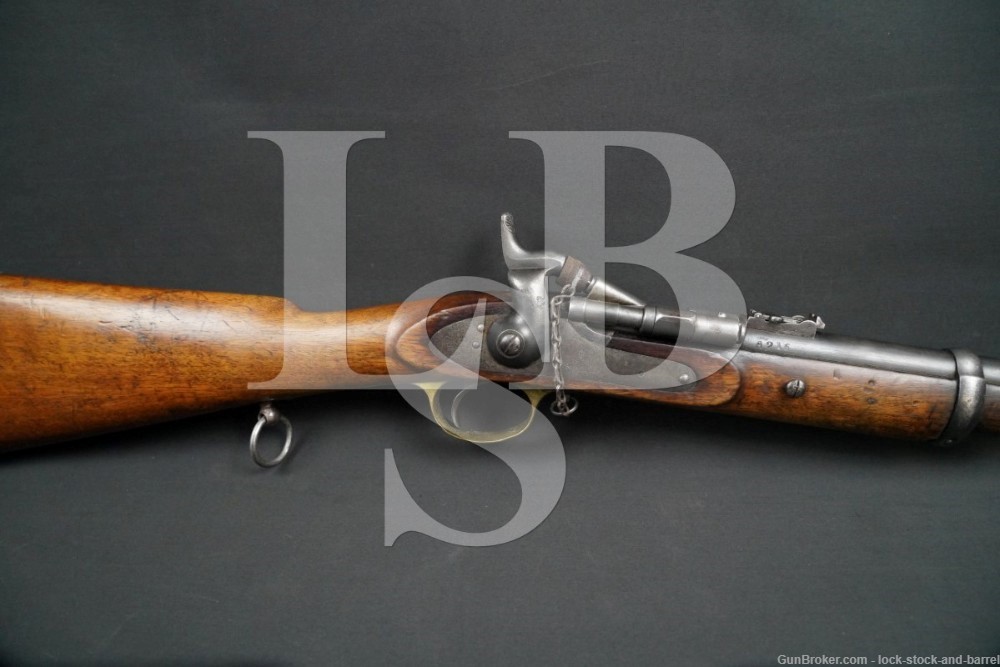 Sights/Optics: The front sight is a blade integral to a rectangular base fixed to the front of the barrel. The rear sight is a shallow v-notch post.

Stock Configuration and Condition: One-piece smooth wood with brass buttplate that has a cleaning kit trapdoor with tools included, belly-installed lanyard ring, straight comb, straight wrist, and one barrel band. The stock has moderate compressions and dings throughout, many of which have been oiled over. Deeper gouges can be seen on the left side of the stock forward of the receiver and on the left side of the buttstock. The LOP measures 13 1/2” from the front of the trigger to the back of the buttplate. The plate has light pitting throughout from prior erosion and is peppered with minor nicks and scuffs. Overall, the stock is in Good-to-Very Good condition, as antique.

Bore Condition: The bore is mostly bright. There is no significant erosion. Stubborn fouling can be seen dotted throughout along with intermittent spots of minor erosion.

Overall Condition: This rifle retains about 87% of its current metal finish. The receiver and hinged breech have mostly gone to white and several light nicks and dings on edges and flat surfaces; small spots of surface oxidation can be seen scattered about. In the forward portion the barrel has light thinning, moderate small nicks, light surface erosion; down the length of the barrel there are scattered light-to-moderate nicks, scuffs, and draglines with a few spots of finish loss. The screw heads have light tool marks but all are usable. The markings are mostly clear, but some are shallow. Overall, this rifle rates in Good-to-Very Good condition, as refinished antique.

Our Assessment: Originally developed by a New York-based entrepreneur for the British, the Snider breech-loading system was designed to economically convert existing muzzle-loading arms to use a breech-loaded cartridge. This allowed Britain to convert their existing inventory to utilize the new technology that allowed the rifles to be fired faster, more reliably, and with ammunition that was easier to store and transport. At the time, this upgrade gave troops an astonishing 284% increase in fire-rate. The sound of infantry line volleys were described as that of “canvas ripping”. The Snider conversion was more of a stop-gap, being swiftly replaced by the Martini, but was a significant development in military small arms. This example, a mark III, is chambered for .577 Snider Centerfire. While many older muzzle loading rifles were converted, the mark III designation means that this rifle was created whole cloth. Acceptance stamps dot the rifle, and notably there is the British Crown over “V.R.” for Victoria Regina—fealty to the Monarch of the time (that the lock plate was made, of course). Rifles such as these are a fascinating aspect of military weapons history, and the fact this is a cavalry carbine makes it all the more so. This example is, for an antique, in Good-to-Very condition with a more than decent bore. Good luck and happy bidding!