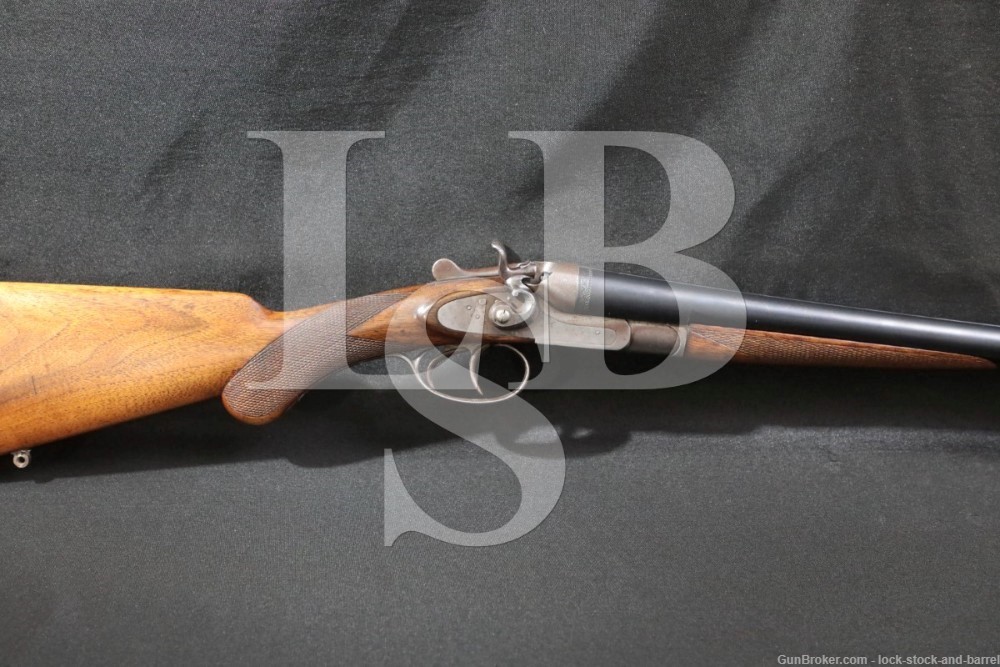 Action Type: Side by Side (SxS) Sidelock Dual-Trigger Shotgun with an Extractor

Markings: The rib is marked “MÉCANISÉ PAR LA FABRIQUE NATIONALE D’ARMES DE GUERRE DE HERSTAL”. The rear end of the barrels feature decorative markings. The bottom of the left barrel features some poorly stamped markings and “CHOKE”, features the “EL” proof of the barrel and “16.7 / 16.7”. The left barrel’s flat is marked “* / AD” which is an inspector’s mark, it has the “EL” proof, the Belgian Perron proof mark which indicates the breeching system was inspected, a diamond marked “16 / C” and has a crowned oval marked “E / LG /*” which was used on all Belgian made arms from 1893 until the late 1960s. The bottom of the right barrel features the serial number “22901” among some faded marks, the “EL” proof and “16.9”. The right barrel’s flat is marked identically to the left barrel flat. The water table is serial matched to the barrels, features the same inspectors mark and has the Belgian Perron proof mark.

Choke: Both of the Cylinder bores are fixed.

Sights/ Optics: The front sight is a brass bead fixed to rib by the muzzles. The rib is serrated to reduce glare.

Stock Configuration & Condition/ Grip: The stocks are two-piece wood featuring a detachable checkered forend, a checkered semi-pistol grip, a straight comb with a cheek piece on the left side and a reddish brown Hawkins butt-pad which is not original to the shotgun. There is a sling attachment fixed to the bottom of the barrels’ rib and one fixed to the belly. The stocks have some light handling marks but they lack any notable defects. The checkering remains sharp. The LOP is approximately 13.75” and 14.5” from the triggers to the rear end of the butt-pad. The drops are approximately 1.75” at the comb and 2.5” at the heel. The butt-pad has some light handling marks. Overall, the stocks are in Fine condition.

Bore Condition: The bores are both mostly bright with light erosion which is concentrated around their chambers.

Overall Condition: The shotgun retains about 65% of its metal finish. The barrel retains most of its bluing but the receiver’s finish has largely worn off. There is scattered light surface oxidation which is concentrated on the receiver and the receiver has taken a patina color. There are some light handling marks, nicks and scuffs. Notably, there is some light wear around the muzzles and some light oxidation around the front sling attachment. The markings remain clear. The screwheads are serviceable. Overall, the shotgun is in Very Good condition.

Mechanics: The action functions correctly. The barrels lock with no play on the receiver. We have not fired this shotgun. As with all previously owned firearms, a thorough cleaning may be necessary to meet your maintenance standards.

This shotgun is what was termed the “Lefaucheux” or hammer gun, a misnomer by FN which was coined because hammer shotguns reminded the company of Casimir Lefaucheux’s pinfire weaponry. Production of commercial weaponry was disrupted by WWI, but it resumed thereafter. The FN hammer guns are rare, it is estimated that only 2,191 were ever made, and they were not purely FN products. The marking on the rib “MÉCANISÉ PAR LA FABRIQUE NATIONALE D’ARMES DE GUERRE DE HERSTAL” translates to mechanized by the National War Weapons Factory, this is important to note because although the shotgun was assembled by FN it was made using parts from other companies. The production of these items would last until the second German conquest of Belgium in WWII, after the war FN never resumed production of their side by side shotguns. This shotgun’s case colored finish has largely worn off of the receiver and the butt-pad is not original to the gun, but otherwise it remains in its original configuration. The shotgun remains aesthetically pleasing and mechanically sound. This is a very rare and well made shotgun that you will not want to miss out on!