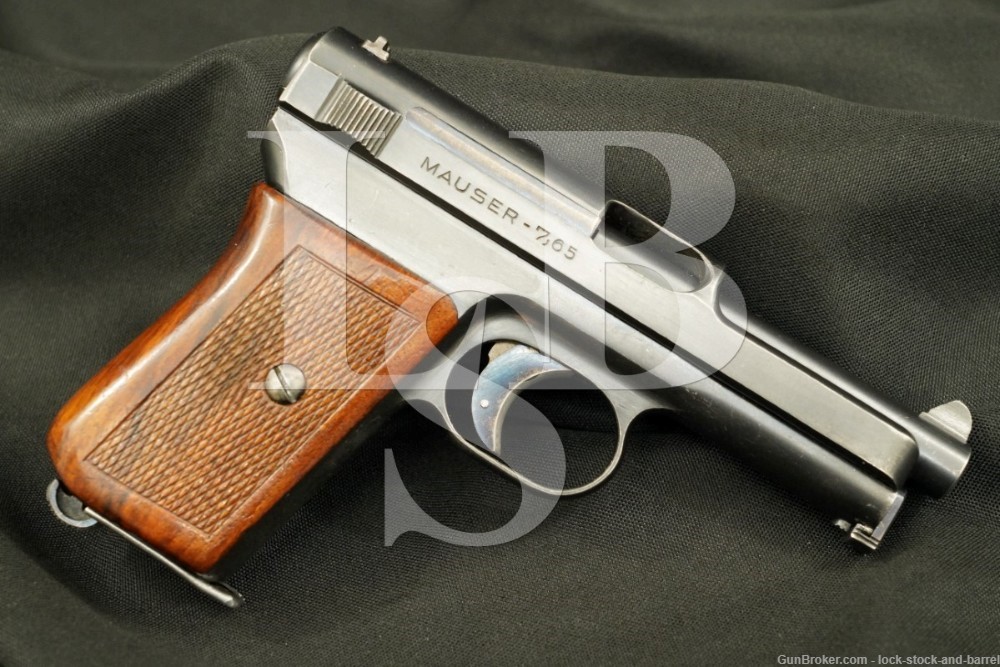 Sights / Optics: The front sight is a serrated ramped blade that is integral to the barrel. The rear sight is a flat-topped “U” notch dovetailed into the top of the slide.

Stock Configuration & Condition: The grip is one-piece checkered walnut with smooth borders that enclose the backstrap. The checkering has rub wear but was shipped with flat peaks from the factory. There are some scattered compressions and handling marks. There are a couple of minor nicks. There are some areas of thinning. There are no chips or cracks. The grip is in about Fine overall condition.

Bore Condition: The bore is semi-bright and the rifling is sharp. There are a couple of small spots of light surface erosion on the bore.

Overall Condition: This handgun retains about 87% of its metal finish. There is some thinning on the edges. There are some scattered spots of surface frost and patina, some of the most noticeable is on the front strap and on the sides of the frame. There are some scattered little nicks and a few little scratches. There are light handling marks and standard operational marks. The grip screws are sharp and the markings are clear. Overall, this handgun rates in about Very Good condition.

Mechanics: The action functions correctly but removing the included magazine is difficult and the floorplate slides off the body. The safety is set by pushing down on the safety lever and released by pushing in on the small button just below it. The slide locks back on an empty magazine and closes if the magazine is removed and then reinserted. We did not fire this handgun. As with all used firearms, a thorough cleaning may be necessary to meet your maintenance standards.

Box, Paperwork & Accessories: Included is a single 7-round magazine. The floorplate can easily slide off the body.

Our Assessment: Mauser began working on a locked-breech semi-automatic pistol, the M1907, and several patents were filed, but the pistol was never produced. The design was changed to a blowback design and released in 6.35mm in 1910. A slightly larger version of the same pistol was made in 7.65mm as the Model 1914. There are several variations due to changes such as lettering or slide serrations to name just a few, becoming the 1910/14, 1910/34, and 1934 models. The Model 10/14/34 pistols were made from 1910 until 1941, with close to a million pistols manufactured. This one is an early 1914 Commercial model made in 1920s and has nice matching markings and its original blued finish. It has a good bore and mechanics, it will make a nice addition to your C&R collection and will be just as fun to shoot. Please see our photos and good luck!