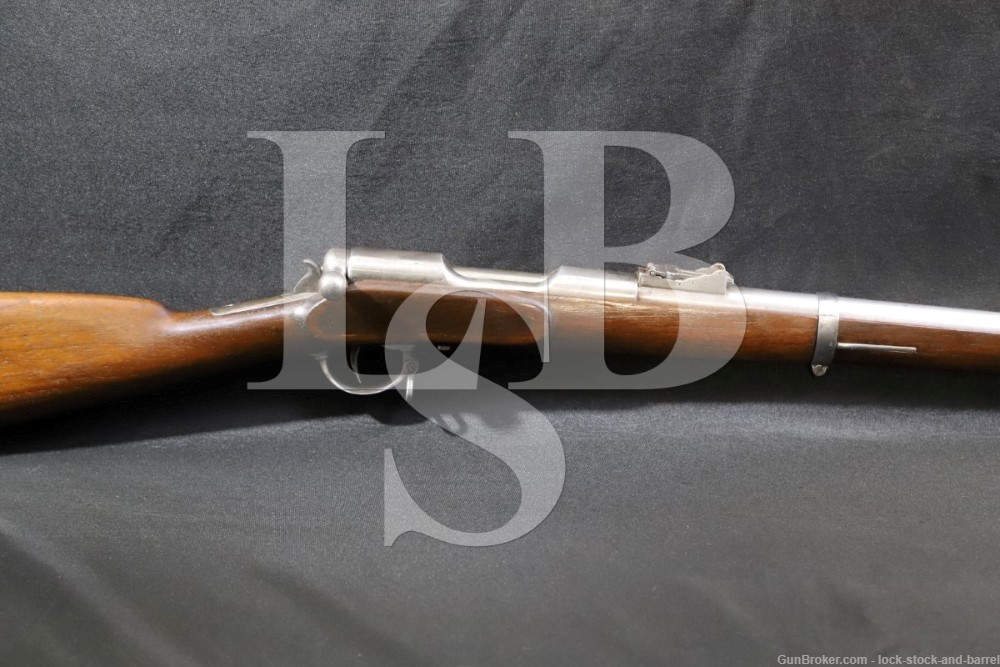 Sights/Optics: The front sight is a blade on a base that is fixed to the front of the barrel. The rear sight is a standard 1853 stepped range finder.

Stock Configuration, and Condition: The stock is a one-piece smooth wood with steel buttplate, straight comb, straight wrist, three barrel bands, capped forend with cleaning rod groove for the included rod. There are sling swivels on the front of the guard and on the underside of the center barrel band. There are minor nicks and compressions scattered intermittently about the stock, the majority of which run along the underside of the wood. There are no chips or cracks. The LOP is 13 1/4” from the front of the trigger to the back of the buttplate. The plate has light surface oxidation at the heel and toe. Overall, the stock is in Very Good-to-Fine condition, as antique.

Bore Condition: The bore is semi-bright and the rifling is well-defined. There are spots of light erosion scattered about along with light stubborn fouling throughout the bore.

Overall Condition: This rifle was finished bright. There are light nicks and dings scattered throughout the metal, many are more notable on the receiver. Nearer to the muzzle there is light surface oxidation. A few areas of the bolt handle are shifting to a light patina. The rear sight has shifted to a darker patina. Screws are very lightly tool marked with strong slots and markings are clear. Overall, this rifle is in Very Good-to-Fine condition, as Antique.

Mechanics: The action functions correctly. We did not fire this rifle. As with all used firearms, thorough cleaning may be necessary to meet your maintenance standards.

Our Assessment: At the end of the Civil War the U.S. Government had a tremendous amount of surplus arms which included not just arms used by the Union, but also thousands of captured and surrendered Confederate arms, mainly obsolete muzzle-loading rifle-muskets. Self-contained metallic cartridges were the future, you see. The U.S. Government was effectively bankrupt during this period and desperately needed an inexpensive way to modernize this surplus, and one such way was to convert muzzle-loading percussion arms to breech-loading rifles that used the aforementioned metallic cartridges. Myriad inventors and companies had ways to convert these arms and then sell them for a tidy profit. Enter Brown Manufacturing and George Merrill’s bolt-action patent. Almost all Brown-Merrills seen today are converted from British Pattern 1853’s, which was a single shot muzzle loading rifle. The turn-bolt mechanism is not too dissimilar to the Ward Burton, the Prussian Dreyse rifle, the French Chassepot rifle, or the Van Choate, which was also manufactured by Brown Manufacturing. This example is fairly nice condition with a decent bore for its age, and great mechanics. We have a minor suspicion that the stock has been replaced at some point, not only due to the overall quality, but the lack of markings seen on the original Enfield rifles, such as those for the BSAC. Good luck and happy bidding!