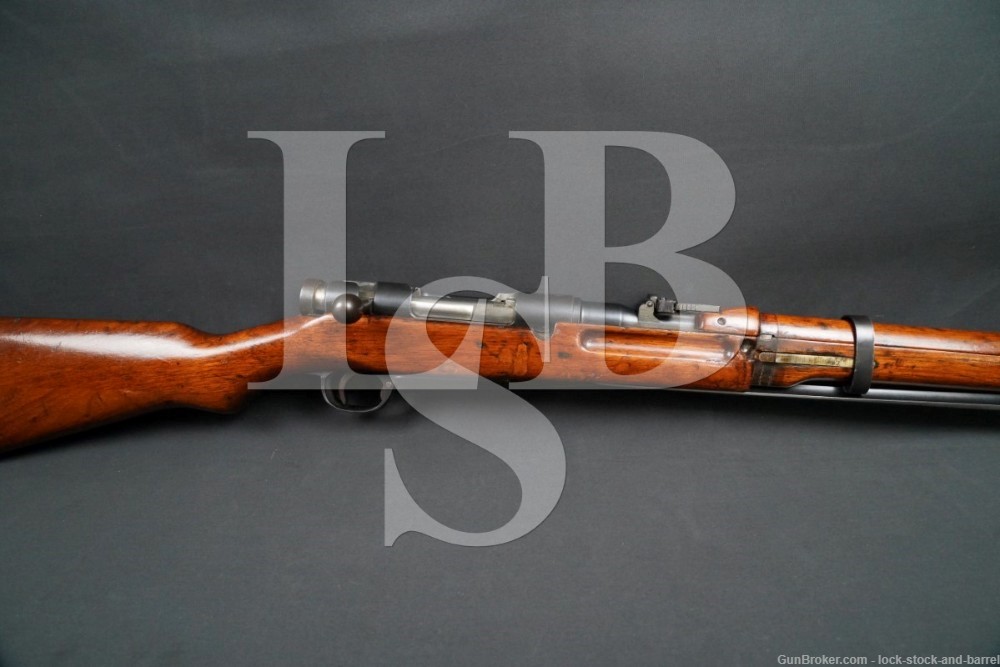 Markings: There is no visible import mark. The top of the receiver is marked with a “chrysanthemum”, the Imperial ownership seal, and with 3 Japanese characters that translate to “44 Type”. The “chrysanthemum” has been defaced with a large “X” but most of it is still visible. The left side of the receiver is marked (from left to right) with the “1st” series symbol, the serial number, with the symbol for Tokyo Artillery Arsenal “stacked cannon balls” and with a small circle. The bottom of the bolt handle and bottom of the nosecap are marked with the last 3 digits of the serial number. The bottom of the safety, and the extractor are marked with numbers that do not correlate to the serial number. The bayonet release button and bolt release lever are each marked with the same assembly number “527”. The rear of the safety is covered in decorative metal work.

Stock Configuration & Condition: The stock is a two piece hardwood with a pistol grip, finger grooves, cutout for the folding bayonet, metal nose cap, barrel band, two sling loops, hooked bayonet quillon (not a stacking loop) and a metal buttplate. The bottom of the forearm has 3 drain holes. There is a lever on the right of the butt that rotates to open an oval in the buttplate. This exposes the cleaning rod storage area in the butt stock. The buttplate shows scrapes and oxidation. The rear of the hand guard shows a repaired crack at the rear sight. The left side of the stock is missing an edge chip at the magazine plate. The left rear of the butt shows a surface crack that ends at the buttplate lever. The right side of the stock shows several filled surface repairs. The wood shows numerous scrapes, scratches and compression marks. Several of these marks have damaged small portions of the surface wood. Most of these marks have been finished over. The LOP measures 13 1/4 inches from the front of the trigger to the back of the buttplate. The stock rates in about Very Good overall condition as refurbished.

Bore Condition:  The lands are bright and the grooves are semi bright. The polygonal rifling is well defined. The muzzle is gray. There is erosion at the muzzle and on the face of the muzzle. There is fouling and light intermittent erosion in the grooves. The fouling should clean up some.

Overall Condition: This rifle retains about 90% of its metal finish. The metal has been treated with cold blue. The metal shows scrapes & small scratches. The barrel, nosecap and bottom metal show areas of thinning as well as discoloration from both the cold blue and oxidation. The right side of the nosecap has surface erosion bleeding through the cold blue finish causing discoloration. The screw heads show use. The markings are deep. Overall, this rifle rates in about Very Good Plus condition.

Mechanics: The action functions correctly. We have not fired this rifle. As with all previously owned firearms, a thorough cleaning may be necessary to meet your maintenance standards.
The bayonet locks into place correctly. The lever on the right of the butt is rotated up to open the oval in the buttplate and expose the cleaning rod storage area.

Box, Paperwork & Accessories: The rifle comes with a green web sling. It shows light discoloration & soiling as well as edge fraying near the front retaining loop. One end of the sling had been cut & shows fraying. It is in Very Good condition.

Our Assessment: This Japanese Type 44 Carbine was made at the Tokyo Artillery Arsenal. It has deep markings including a “chrysanthemum” and “Type 44” characters on the receiver. The “chrysanthemum” has been defaced with a large “X” but most of it is still visible. The rifle has seen some use but the stock has been refinished & the metal has been treated with cold blue. This Carbine looks impressive when the folding bayonet is extended. The hook on the bayonet is not a stacking loop. It is meant to replicate a Type 30 bayonet quillon. Bayonet fencing with hooked quillons was part of Japanese military training. This Type 44 Carbine will add to your collection.
For more see page 208 of Joe Puleo’s book, Bolt Action Military Rifles of the World.