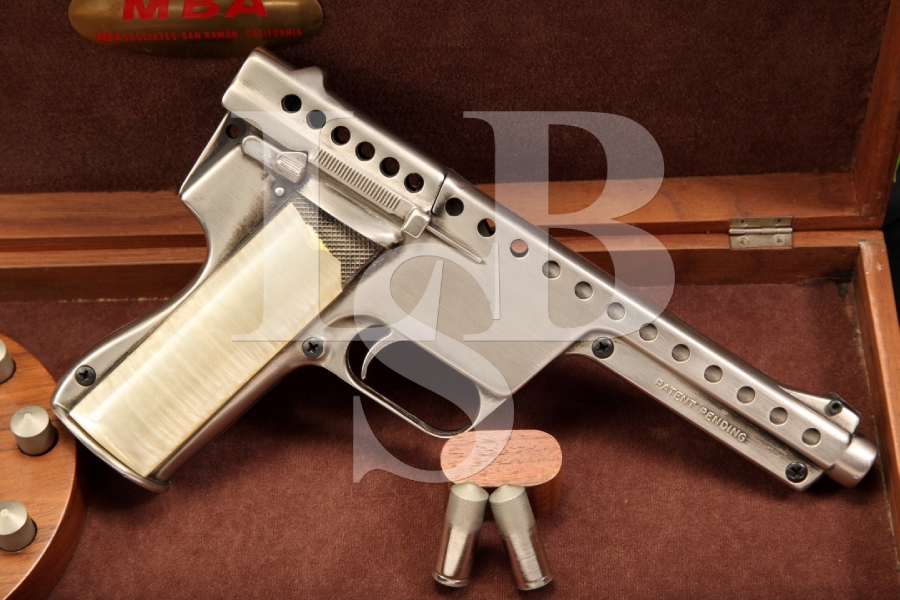 Markings: The left side of the pistol reads “MBAssociates / San Ramon, Calif.” under the barrel, “MARK I / MODEL B / 13mm GYROJET/ Serial No. B058” above the trigger area and “ON OFF” next to the slide release lock. The right side is marked “PATENT PENDING”.

Sights / Optics: The front sight is a thick blade secured by a screw. The rear sight is a “U” notched base that is integral to the top of the slide.

Stock Configuration & Condition: The grips are pearl colored resin. The left side shows scrapes at the bottom and middle. The right side has a portion of the grip broken off at the top. The trigger can be pulled without coming into contact with broken area. The grips rate in about Fair overall condition.

Bore Condition: The smooth bore is bright. There is no erosion in the bore.

Overall Condition: The alloy finish shows light scrapes and a few scratches. Some areas were not cleaned properly when the “antiquing” was done, leaving a dark color to areas of the alloy. The dark areas around the barrel ports are due to rocket fuel residue. The metal grip base has small dents. The screw heads are intact. The markings are deep and clear. Overall, this handgun rates in about Very Good condition.

Mechanics: The hammer will not lock down into position. It appears that the sear will not engage it. We have not tried to remedy the problem. We did not fire this handgun.

Box, Paperwork & Accessories: The pistol comes with is original hardwood case that has velvet lining and wooden mounts. The top of the case has a plaque on it that reads “MBA / GYROJET ROCKET HANDGUN“. The plaque shows oxidation and a few small scratches. There is an oval plaque on the underside of the lid that reads “MBA / MBASSOCIATES SAN RAMON, CALIFORNIA”. It shows scrapes and scratches. One wooden mount is for a medallion surrounded by 10 nickel plated (non-firing) rounds and one mount is used to hold the pistol in place. Er do not know with certainty, but the cloth lining looks to have been replaced, and there is some evidence of repair to the box corners. The medallion shows a bust and is marked “ROBERT HUTCHINGS GODDARD 1882 – 1945”. He is considered the father of American Rocketry and the designers of the Gyrojet were basically rocket scientists. The medallion shows oxidation. The rounds are two toned and have base plates with four jet holes but do not have primers in the bases. Some of the bases show oxidation. The wood case is made of walnut and shows light scrapes and scratches. The bottom of the case shows scrapes and scratches as well a worn sticker that reads “American Walnut”. The case and its contents are in about Very Good Plus condition.

Our Assessment: Now you can legally own a hand held, semi-auto rocket launcher. We are lucky enough to offer up a RARE MBAssociates Gyrojet Mark I Model B Rocket Handgun with its display case and display ammo. This Gyrojet has a piece missing from the grip, but that does not interfere with the handling of the gun and does not show when displayed in its case. Here is some info on the “Rocket Handgun” from http://milpas.cc/rifles/ZFiles/Odd%20Fellows/Gyrojet/Gyrojet.htm: “Ronald Reagan, General Curtis Lemay, J. Edgar Hoover and Barry Goldwater all owned one. Special-ops teams carried them in Vietnam, and they have even been featured in James Bond movies. In other words, the Gyrojet pistol is one of the strangest, unique firearms ever manufactured. More rocket launcher than firearm, the ½” .50 cal. bullet is a solid-fuel rocket, ignited by a rifle primer. The gun’s barrel has a smooth bore and the bullet’s spin is achieved by four angled gas ports in its base. The pistol’s firing mechanism is just as unique. When the trigger is pulled, it releases a hammer that is mounted forward of the bullet. The hammer swings up through a cut in the bottom of the barrel, strikes a bullet on its nose, and drives it rearward against a fixed firing pin. As the bullet launches forward, it cocks the hammer and another round is chambered from a fixed magazine in the grip. The Gyrojet is constructed from an aluminum, magnesium, and zinc alloy, weighs 22 ounces, has no recoil, and functions quite well under water. However, due to accuracy problems and the high cost of ammunition, these rocket-powered sidearm never really got off the ground”.