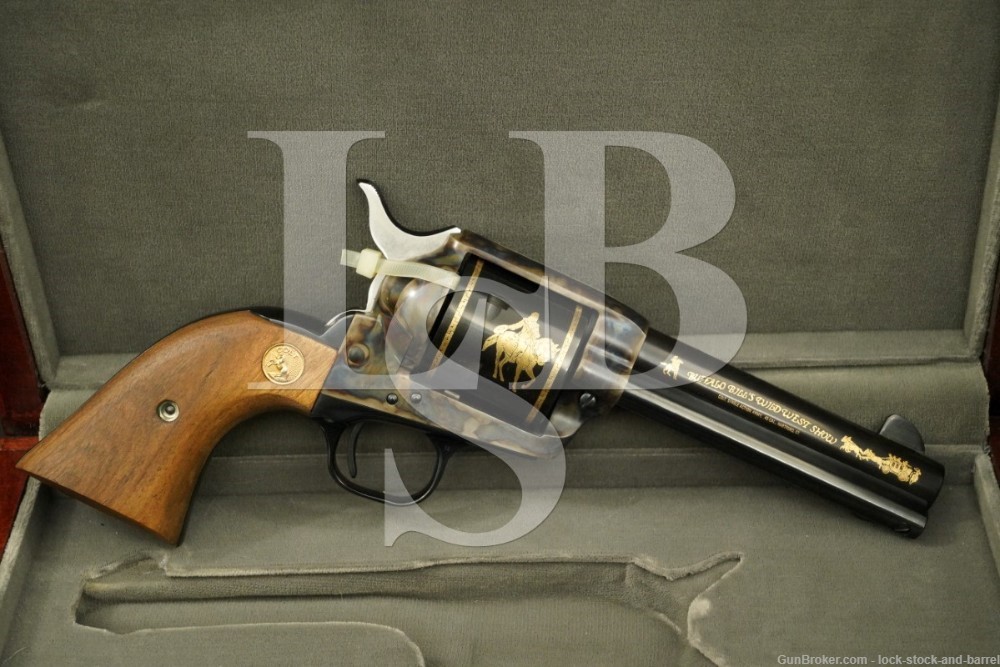 Markings: The top of the barrel is marked “COLT’S PT. F.A. MFG. Co. HARTFORD CT. U.S.A.”. The bottom of the frame is marked “CBBC / 0151”. The left of the trigger guard is marked “VP” in triangle and “K”, the right is marked “K”, the right of the trigger guard is marked “H”. The left of each portion of the grip frame, the left-rear of the frame and the front of the cylinder are each marked “151”. The left of the frame is marked “PAT. SEPT. 19, 1871 / JULY 2, 72   JAN 19, 75” and with a rampant colt. The inside of each grip has “151” hand-written. The left of the barrel has “Buffalo Bill / Centennial Commemorative” in gold with gold scenes from Bill’s Wild West Show, the right has “BUFFALO BILL’S WILD WEST SHOW / COLT, SINGLE ACTION ARMY, .45 CAL., HARTFORD, CT.” in gold with gold Wild West Show scenes. The outside of the cylinder has gold bands front and rear with a gold bust portrait of Buffalo Bill Cody over “COLONEL / CODY” on banner and Bill Cody on horseback on the opposing side.

Stock Configuration & Condition: The grips are two-piece smooth walnut panels with gold-colored Colt medallions. The grips have no notable wear or damage, only light handling marks. There are no chips or cracks. Overall, the grips are in Excellent condition.

Overall Condition: This handgun retains about 98% of its metal finish.  The right frame flat has some scratches and faint surface oxidation. Otherwise, there are only light handling marks. The screw heads are sharp. The markings are clear. Overall, this revolver is in Fine-Excellent condition.

Box, Paperwork & Accessories: The revolver comes with a wood presentation case with a gray fabric-lined French-fit interior and a faux-wood cardboard Colt box with serial-matching label. The case shows faint storage wear on the exterior with minor wear on the interior from the contents. The box shows scattered storage wear with fraying and tears at edges and corners.

What better firearm to commemorate Colonel “Buffalo” Bill Cody and his Wild West show? Celebrating the 100th anniversary of the show, in 1983, Colt honored this inimitable production with a commemorative issue of their Single Action Army revolvers, with only 1,236 made and not all of them shipped. It is a beautiful piece with gold markings and images of Bill Cody and scenes from his Wild West show. Such markings are also featured on the cylinder, which does not have flutes. Unfluted cylinders are not at all common on SAA revolvers, but do provide engravers with more “canvas” for their work.

This example is in Excellent condition, appearing to have spent more time in its included display case than out. The case helps to display the revolver’s beautiful engraving and gold inlay and the original serial-matching box is also included for the discerning collectors. This would make a fantastic addition to any Colt collection, especially for fans of Wild West. Please see our photos and good luck!