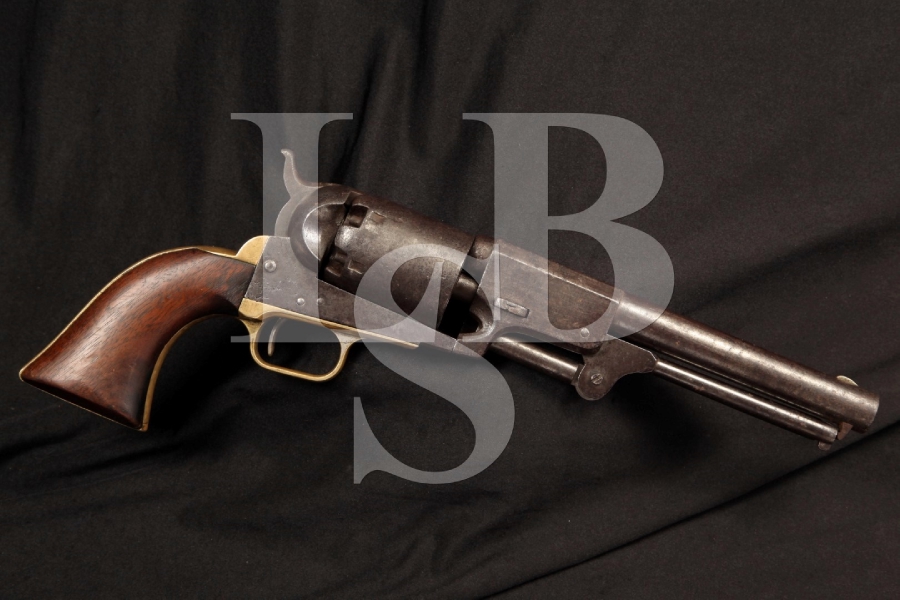 LSB#: 140715JR04 Make: Colt Model: 3rd Model Dragoon Serial Number: 15165 Year of Manufacture: 1856 Caliber: .44 Caliber Ball Action Type: Single Action Cap and Ball Black Powder Revolver Markings: The flat of the barrel assembly is marked “ADDRESS SAML COLT NEW YORK CITY”. The bottom of the barrel, bottom of the frame, trigger guard and butt are marked “15165”. The cylinder and loading lever are marked “5165”. The cylinder pin is marked “5165”. The left side of the frame is marked “COLT’S / PATENT”. The left side of the trigger guard is marked “G”. The right side of the trigger guard under the grip is marked “S”. The wedge is marked “5168”. Barrel Length: 7 ½” Round Sights / Optics: The front sight is a brass blade fixed to the barrel. The rear sight is a notch in the hammer. Stock Configuration & Condition: The smooth one piece walnut grips have been refinished. There is a large compression mark on the top of the left side of the grip. Both sides have numerous handling marks on and below the finish. Most of the edges are a little shy of the metal frame, as a result of sanding prior to refinishing. The grips rate in about Good overall condition as refinished. Type of Finish: Blue Finish Originality: Original Bore Condition: The bore is dark and the rifling is worn but sharp. There is erosion in the bore. Overall Condition: This handgun retains about 0% of its metal finish. It appears that this pistol was cleaned, but long enough ago that a nice patina has formed on the metal surfaces. The barrel assembly and loading lever exhibit numerous areas of frosting, oxidation and erosion. Most of the surface on the left side of the frame shows erosion, while the right side of the frame exhibits scattered patches of erosion and frosting. The hammer and recoil shield show erosion on most of their surfaces. The trigger guard still has a couple patches of the original silver plating, but most of the surface is dull from use with numerous compression marks. The backstrap is dull from use and exhibits scattered compression marks. The screw heads are deformed but deep. The markings are shallow. Overall, this handgun rates in about Very Good condition. Mechanics: The action functions correctly. We did not fire this handgun. Box, Paperwork & Accessories: None Our Assessment: Colt began producing the Dragoon Model in 1848 and continued making them until the introduction of the smaller, lighter 1860 Army. The Dragoon revolver was introduced to replace the troubled Walker Colt, which among other issues, had a tendency to explode when over charged. The cylinder on the Dragoon was shortened to prevent over charging, and even though the weight of the gun was dropped to 4 ½ pounds, they were still heavy enough to most often be carried in pommel holsters mounted to saddles. This particular Dragoon was made close to the middle of the production run. All the parts are matching and the trigger guard even retains a couple spots of the original silver plating. This revolver may have been cleaned long ago, and in the meantime, it has developed an attractive patina. Overall, this is a Very Good specimen of an important member of the Colt percussion revolver family.