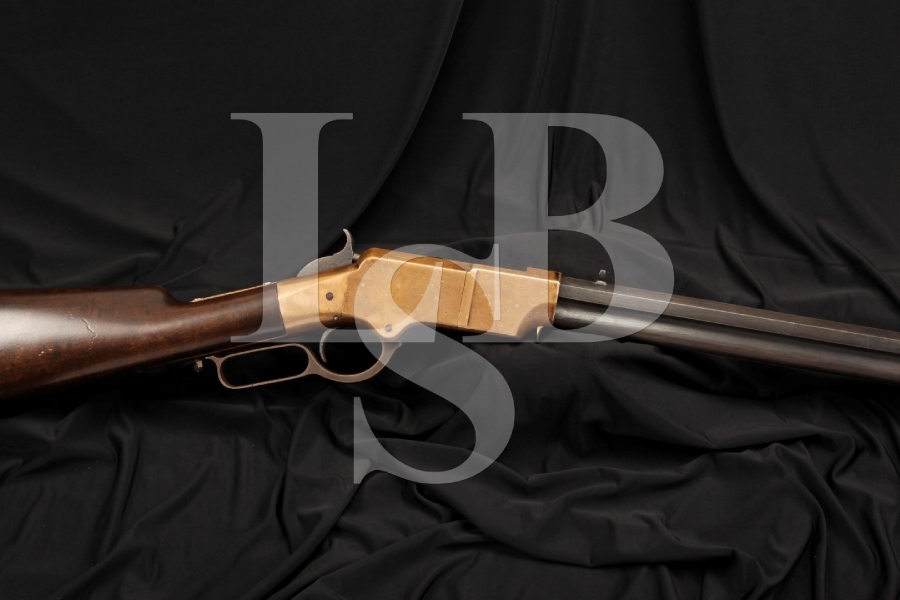 LSB#: 140715JR01 Make: New Haven Arms Co. Model: 1860 Serial Number: 9843. (The period is part of the serial number) Year of Manufacture: 1865 Caliber: .44 Rim Fire Action Type: Lever Action with Tubular Magazine Markings: The top of the barrel just forward of the receiver is marked “9843”. The top of the barrel underneath the octagonal loading sleeve is marked with the assembly number “2798”. This is not the serial number and it is not supposed to match. The top of the barrel forward of the rear sight is marked “HENRY’S PATENT OCT 16 1860 / MANUFACT’D BY THE NEW HAVEN ARMS CO. NEW HAVEN, CT.” Half of the top barrel address is thinned to the point of illegibility. The left side of the bottom tang is marked “9843”. The stock channel and buttplate are NOT numbered. Barrel Length: 24 ¼” Sights / Optics: The front sight is a brass blade and the rear sight is a semi buckhorn sight which is dovetailed to the barrel. Stock Configuration & Condition: The stock is Walnut. There is a smoothed gouge on the left side to the rear of the sling staple. The right side of the stock has a few smooth compression marks. There is a scratch on the right side which started at the buttplate. The stock screws are un numbered and are likely replacements, as are the stock and buttplate. The buttplate is a close to correct shape, and is very old, though is not quite correct. Likewise, the stock looks great and is well made, but does not fit the metal perfectly, with a small gar around the tangs. The LOP measures 13” from the front of the trigger to the back of the pointed buttplate. The stock rates in about Fine overall condition. Type of Finish: Browned with a Brass Receiver. The patina of the receiver is honest where metal work has not affected it. The rear portion of the receiver has been repaired and the tangs have been re-brazed to the frame. We cannot say why this was done, though they are the original and correct tangs… This portion of the brass on the rifle is shinier than on the main section of the receiver. Finish Originality: Refinished Long Ago Bore Condition: The bore is dark and the rifling is present. There is erosion and pitting. Overall Condition: This rifle retains about 65% of its post production metal finish. The balance of the finish shows sanding marks on the barrel, incurred during metal preparation before the refinish. There are a few light scratches in the metal. The octagonal barrel shows some variations in the edges from the refinish. The top barrel address is thin and only part is legible. There are compression marks on the brass receiver. The brass patina is nice, showing honest age. The lever has a possible tick mark on the right side. The screw heads are bruised and many are replaced. The markings are light. Overall, this rifle rates in about Fair – Good condition. Mechanics: The action does not function entirely correctly. The hammer will not stay back as the trigger does not pivot and therefore does not catch the hammer notch. The lever does draw the bolt back and forward and the carrier up and down, it is just the hammer that needs work. We have not fired this rifle. Box, Paperwork & Accessories: None

Our Assessment: This is a real Henry. It has seen some work and there are better ones out there, but it is still (and definitely is) a real Henry. The tangs have been reattached to the frame – why they were off, we cannot say, though these are definitely the original tangs and are back on it now. Likewise, the barrel was likely once quite eroded (like the hammer is now), leading an owner of this rifle to take the metal down and refinish it – this may also explain the replaced stock and plate. That all said, the majority of this rifle is original, the work was done long enough ago that natural age has formed and there is a lot of original patina to the brass. The Henry may be the most desirable rifle ever produced, certainly one of the most important. It was the first practical cartridge repeater, paving the way for everything since. It is the first of the Winchesters and even in this condition would be the pinnacle of your collection. This rifle has been in a California collection for decades and has likely not sold publicly in 40+ years. It is a real Henry, we needn’t say anything else…