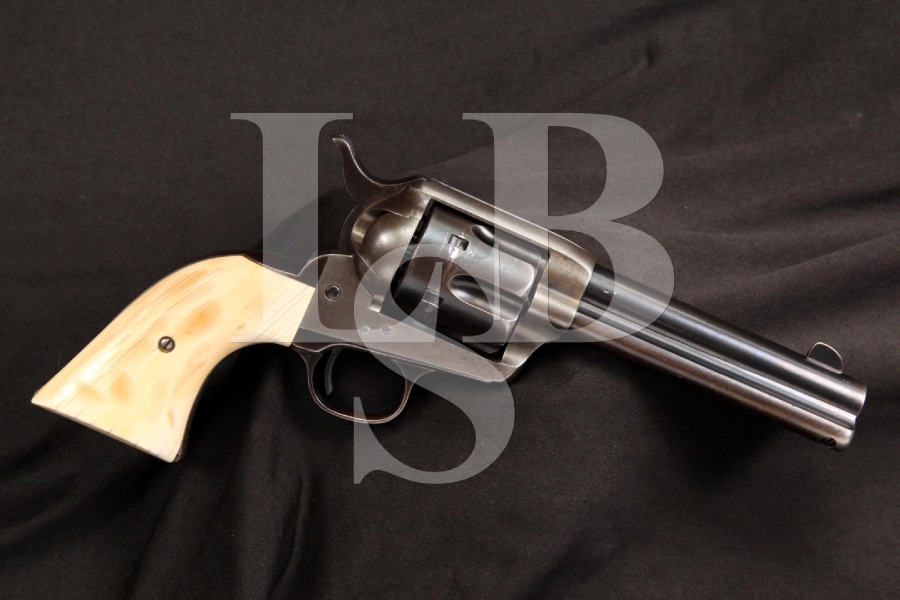 LSB#: 140711LD01 Make: Colt Model: Single Action Army Serial Number: 144439 Year of Manufacture: 1892 Caliber: .41 Long Colt Action Type: Single Action Revolver with Side Loading Gate Cylinder Markings: The left side of the barrel is marked “41 C”. The left side of the frame is marked “Pat. Sept.19,1871. / July 2,72. Jan.19,75.” and with the Rampant Colt logo. The top of the barrel is marked “Colt’s Pt. F.A. Mfg. Co. / Hartford, CT. U.S.A.” The underside of the frame and trigger guard are marked “144439”. The bottom of the backstrap is marked “144 / 439”. The inside rear surface of the loading gate is marked with the assembly number “318”. Barrel Length: 4 ¾” Sights / Optics: This revolver is mounted with a “U” notch milled in the top strap for a rear sight and a quarter round blade front sight fixed to the barrel. Stock Configuration & Condition: The grips are smooth bone that show light yellowing with age and light surface cracks. They show only very light handling marks, but the right grip has a small chip out of its bottom front corner. The grips are in about Very Good overall condition. Type of Finish: The barrel, cylinder and grip frame are blued. The frame and hammer are case colored. Finish Originality: The finish is original. Bore Condition: The bore is dark and the rifling is sharp. There are several spots of erosion near the muzzle. Overall Condition: This revolver retains about 65% of its metal finish. The barrel and ejector rod housing show surface loss on their outside front edges and mild thinning along their outside surfaces. There are tiny compression marks on the right side of the barrel at the front sight, long scratches along the underside of the barrel, tiny compression marks at the underside rear of the barrel and two compression marks on the right side of the barrel just in front of the frame. There are small compression marks along the length of the ejector rod housing. There are only traces left of the case coloring on the frame – mainly in the protected area at the front of the cylinder. The rest of the finish is mottled with a spot of pinprick surface erosion on the top strap just in front of the hammer. The hammer shows pinprick surface erosion on all sides. The cylinder shows pinprick surface erosion, surface loss on its front edge and rounding of the edge from holster wear, and a few compression marks. The cylinder has a drag line and spots of surface loss in the grooves leading to the bolt stop cuts, with the metal slightly raised at the edges of the cuts. The backstrap and front strap both show thinning with surface loss on their bottom edges and scratches in the metal. The front strap also has three notches filed into the metal. About half of the screw heads are distressed. The markings are clear. Overall, this revolver rates in about Fine condition for an Antique.Mechanics: This revolver has a small amount of play in the cylinder lockup. The action functions correctly. We have not fired this revolver. Box, Paperwork & Accessories: None Our Assessment: From http://www.deviantart.com/morelikethis/322444596/digitalart/drawings/technical?view_mode=2#skins: “The Colt Single Action Army handgun is a single action revolver with a revolving cylinder holding six rounds. It was designed for the US government service revolver trials of 1873 by Colt’s Manufacturing Company and adopted as the standard military service revolver until 1892. Although the SAA has been offered in over 30 different calibers and various barrel lengths, its overall appearance has remained consistent since 1873. Colt has discontinued its production twice, but brought it back due to excessive demand.” This is a 122 year old Colt SAA made at the end of the blackpowder frame period. The revolver has about 65% of its original finish remaining and is in about Fine condition. It shows some surface loss from holster wear, thinning and pinprick surface erosion on the cylinder and hammer. It is stocked with bone grips that fit well and show yellowing and light surface cracks from age – reminiscent of the grips carried on John Wayne’s Colts in his many pictures. There is, however, a small chip missing from the front corner of the right grip. This will look great in a Colt collection– and will make a great conversation piece as well, with everyone wondering where and when the three notches got cut into the front strap. If it goes unnoticed by the collectors, it is a great opportunity for someone who wants to shoot the real deal in a traditional caliber. Ten-X and others still make .41 Long Colt ammunition, although it’s a little pricey, so if you shoot a lot, you might be better off getting some brass from Starline and loading your own.