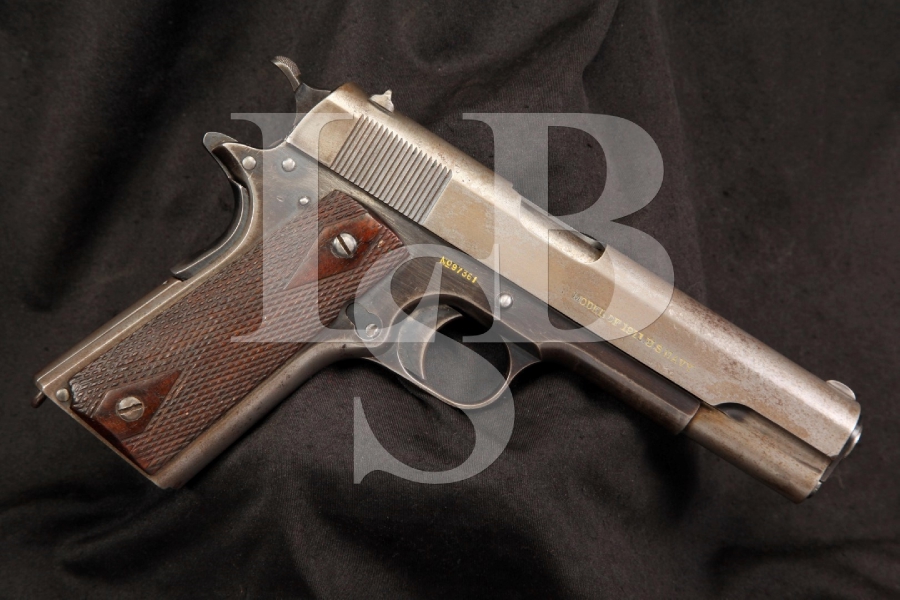 Make: Colt Model: 1911 Serial Number: 97361 Year of Manufacture: 1914 Caliber: .45 A.C.P. Action Type: Single Action, Semi-Automatic with Removable Magazine Markings: The left side of the slide is marked “PATENTED APR.20,1897 SEPT.9,1902. / DEC. 19,1905. FEB. 14,1911. AUG.19,1913”, “COLT’S PT. F.A. MFG. CO. / HARTFORD, CT. U.S.A.” and with the Rampant Colt logo at the rear. The right side of the slide is marked “Model of 1911. U.S. Navy”. The left side of the frame is marked “United States Property”. The right side of the frame is marked “No. 97361”. The left side of the frame above the safety is marked with a circled “WGP” inspection stamp. (Walter G. Penfield Maj., USA Colt M1911 .45 Pistols 1909-1914.) The left side of the barrel lug is marked “P”, identifying the barrel as made by Singer during WWII. The flat on the underside of the slide is marked with a small 5-pointed star and the groove on the right side of the flat is marked with an arrow head and “2”. The rear of the slide at its top edge is marked “H”. The flat at the top rear of the frame is marked “R” and “H” and at the front of the magazine well with “P”. The “H” is the Colt Inspection Mark of Frank Hosmer and the “R” is the assembler’s mark of Gabriel Rice. Barrel Length: 5” Sights / Optics: The pistol is mounted with a ”U” notched rear sight dovetailed into the slide and a rounded blade front sight fixed to the slide. Stock Configuration & Condition: The grips are checkered walnut “double diamond” grips. The grips show oil staining with marks in the diamonds around the screw heads. The checkering shows moderate wear with a few areas of heavy wear in the right grip. There are no chips or cracks noted. The grips rate in about Good condition. Type of Finish: Blue Finish Originality: Original Bore Condition: The bore is bright and the rifling is shallow but sharp. There is no erosion in the bore. Overall Condition: This pistol retains about 20-25% of its metal finish. There is finish remaining on the sides of the frame, safety, slide release, hammer and grip safety. The rest of the pistol shows surface loss and frosting on the slide, front strap and mainspring housing, with thinning on the other parts. The slide shows spots of pinprick surface erosion along the top and right side, with a small spot on the left side opposite the ejection port. There is also erosion on the right underside of the frame in front of the trigger guard and a sprinkling of pinprick surface erosion on the front of the grip. There are compression marks on the rear right side of the slide and frame and left lower edge of the slide above the slide release. There are a few light scratches on the left side of the frame. The hammer checkering shows light wear, the slide release checkering is sharp and the safety checkering shows moderate to heavy wear. The slide serrations are sharp. Three of the grip screws are sharp but with light marks of a screwdriver and the fourth is disfigured. The markings are clear. Overall, this pistol rates in about Very Good condition. Mechanics: The action functions correctly. It has both a manual and grip safety and the trigger pull is crisp. The slide is tight to the frame. We did not fire this pistol. The pistol has a lanyard ring on the bottom of the mainspring housing. Box, Paperwork & Accessories: No magazine is provided. Our Assessment: The 1911 and 1911-A1 pistols served the military of the United States from 1911 to 1985, through both World Wars and the Korean and Vietnam wars. They gained a reputation as a reliable handgun with plenty of stopping power, and are held in high regard by those who have used them. This is a U.S. Navy marked Colt Model 1911 pistol in Very Good condition with what appears to be a Singer Mfg. Co. replacement barrel from WWII. It was one of 1,537 pistols ordered by the U.S. Navy for use on various ships (probably the battleships Nevada, Pennsylvania and Arizona if the pistols were shipped in order of serial number.) The pistol shows the correct inspection marks for its period of manufacture. It shows surface loss on the slide and frame with pinprick surface erosion on the slide and erosion on the underside of the frame. The grips appear original to the pistol and show moderate to heavy wear in the checkering. While there were over 31,000 pistols made for the U.S. Navy in the early years of WWI, not that many have survived to this day: corrosive sea salts and ships sunk with the guns lost at sea make them somewhat rare. Also, this pistol was one of 1537 known to have been ordered for use on ships, most of which were battleships. This will be a nice addition to a collection of weapons used by the US military in WWI. If it gets away from the collectors, it can be used for home protection and can even be shot in the Wild Bunch side match competitions at your local SASS club.