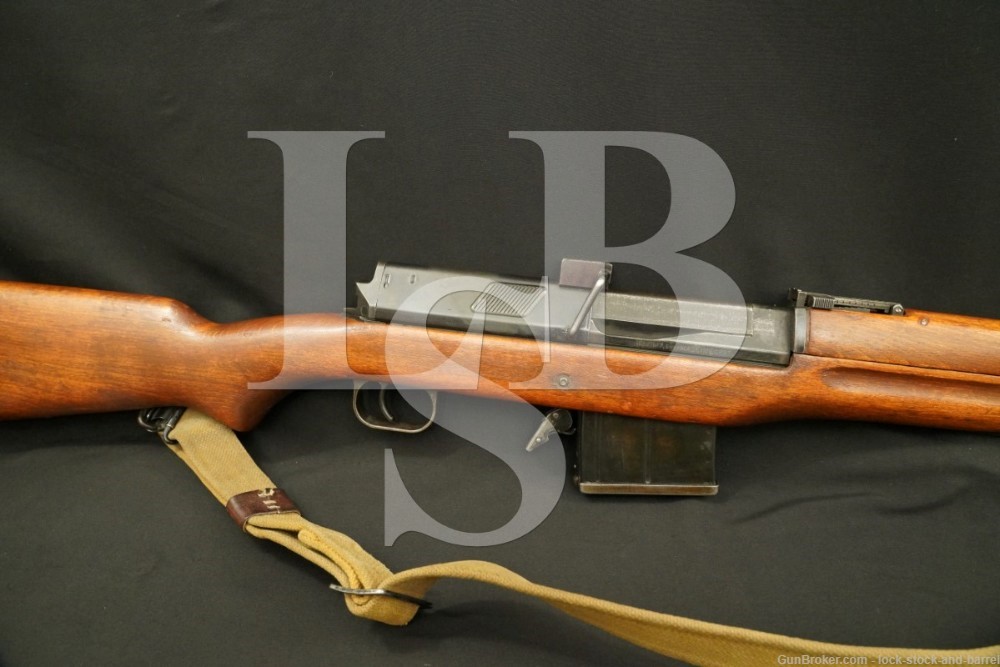 Sights / Optics: The front sight is hooded post set atop a raised base. The rear sight is a “U” notched blade attached to a sliding escalator assembly. It is marked with Arabic “numbers”. The sliding riser is secured with wire.

Stock Configuration & Condition: The two piece hardwood stock has a pistol grip, finger grooves, metal nosecap, barrel band with sling bar, through bolt, sling loop under the butt, and a metal buttplate. The buttplate shows scratches, thinning and discoloration from oxidation. The rear of the handguard shows a repaired crack and a nailhead. The wood shows several scattered scrapes & scratches. The LOP measures 13 1/8 inches from the front of the trigger to the back of the buttplate. The stock rates in about Very Good Plus overall condition as refinished.

Overall Condition: This rifle retains about 85% of its metal finish. The top cover has been refinished. Small scratches and oxidation show through the new finish on the top cover. It also shows discoloration. The metal shows scrapes, scratches and thinning. The thinned portions of the metal show discoloration from oxidation. The screw heads show light use. Most of the markings are deep. The new serial number is lightly etched on to the receiver. Overall, this rifle rates in about Good condition (see Mechanic section below).

Mechanics: The rifle’s trigger does not function properly. The trigger only functions intermittently. Something is holding it up and not allowing the rifle to fire. The rifle trigger will function properly after the rifle is re-cocked once or twice.
The action functions otherwise. We did not fire this rifle. As with all used firearms, a thorough cleaning may be necessary to meet your maintenance requirements.

Our Assessment: Egyptian Hakim rifles were made at State Factory 54 during the 1950’s and early 1960’s. The Hakim was Egypt’s  first domestically produced semi automatic rifle. It is based on the Swedish AG 42 Ljungman. It is a 8mm semi automatic rifle with a strong bright bore. It looks pretty good (for its age) and is marked with clear Arabic script & numerals. The rifle needs a bit of work as the rifle’s trigger has an issue. The trigger only functions intermittently.