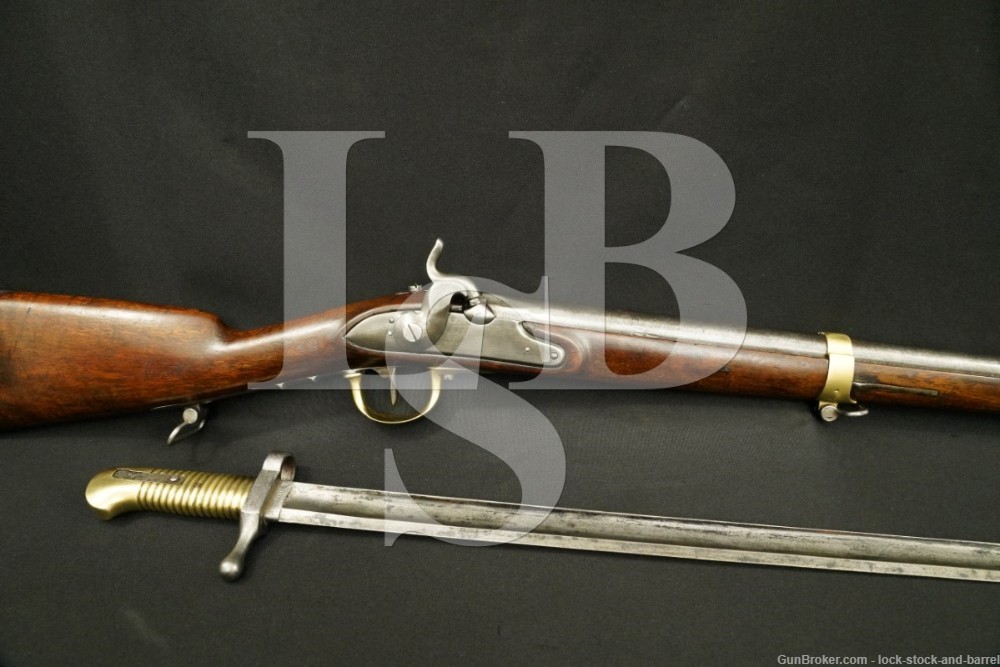 Make: We believe that this was originally made by France or Piedmont Italy and eventually modified by The C.S.A (Confederate States of America)

Sights/Optics: The front sight is rounded blade integral to the forward brass mounting. There is no rear sight present.

Stock Configuration and Condition: The stock is a one-piece smooth wood with straight grip, straight comb, two small finger grooves on the bottom tang, and a metal buttplate. There is a crack on the left side along the top edge at the very front of the forend. There are some scattered compressions, scuffs, and dings into the wood but the stock looks good. The LOP measures 12 1/2” from the front of the trigger to the back of the buttplate. The plate scattered erosion and scratches under its new finish. Overall, the stock rates in Very Good condition, as antique.

Bore Condition: The bore is dark and there is oxidation and erosion.

Overall Condition: This musketoon retains about 70% of its metal finish. There are scattered areas of erosion and discoloration from previous oxidation. There is standard operational wear. The screw heads are lightly tool marked with usable slots. Markings are clear. Overall, this rifle is in Good condition, as antique.

Mechanics: The action functions correctly. We have not fired this musket. As with all used firearms, thorough cleaning may be necessary to meet your maintenance standards.

Box, Paperwork, and Accessories: Included is a 30″ saber bayonet.

Our Assessment: This is a very interesting musketoon and has a number of features that make us wonder its origin, the design has the finger grooves that the French Mle 1822 had, a similar construction to a Piedmont or Piedmontese musket, and has a lock that we have seen on Confederate longarms. The Kingdom of Piedmont-Sardinia had adopted the percussion ignition system in 1844 with a smoothbore musket based on the percussion altered French Mle 1822. The French Mle has finger grooves of this style and if this is indeed a Piedmont it would only make sense to see finger grooves of the same design. Piedmont muskets were made in Torino, Italy, as well as in Belgium. We also do not see any British or Belgian markings on this rifle making us think that it is Italian. Some number of Piedmonts were imported during the Civil War by Federal agents and the CSA did do modifications to many of the guns they received. The construction and metal fittings look like those off a Piedmont which would stand to reason if a CSA gunsmith shortened the barrel and stock, this looks like it could be the case because the bayonet lug has a thin border of brass brazing around its edges and looks like an alteration. The action looks like some we have seen on other CSA arms and there is also brass brazing around the bolster making us think it is a modified lock. This is a really cool percussion and comes with a beyonet that is as long as the barrel, a pretty badass setup. Good luck and happy bidding!