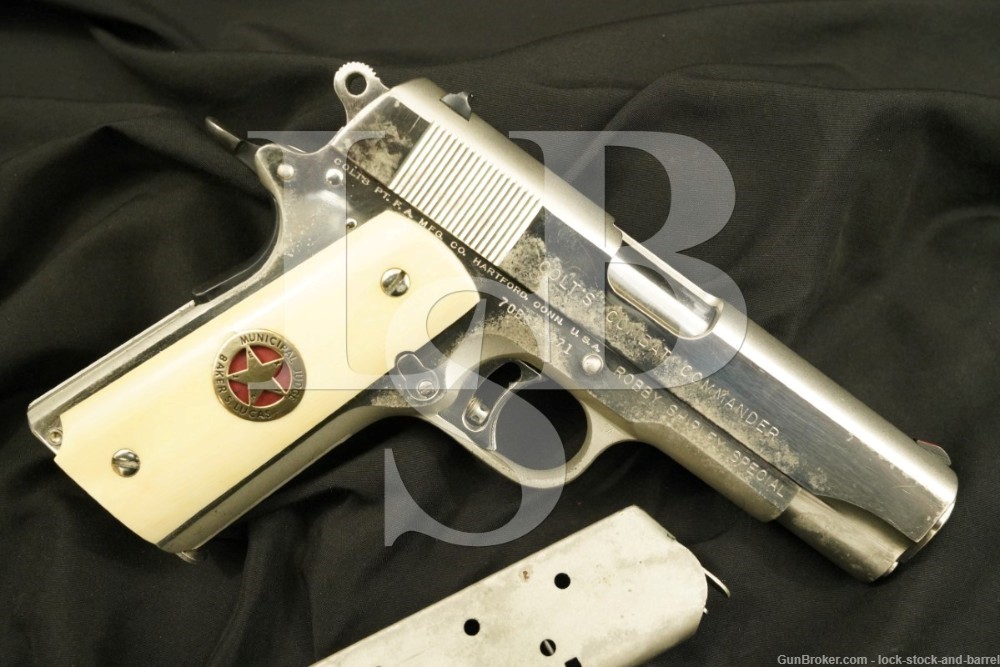 Sights / Optics: The front sight is a serrated, ramped blade fixed to the front of the slide with its rear face painted red. The rear sight is a white-outlined square notch dovetailed to the rear of the slide.

Stock Configuration & Condition: The grips are two-piece custom bone panels. The right panel has an inlaid badge marked “MUNICIPAL JUDGE / BAKER S. LUCAS” around a star which has the letters “TEXAS”, one at each point of the star. The right panel has a tiny crack at the rear edge of the badge. The left panel has minor tool marks at the top mounting screw. Otherwise, there are only light handling marks. Overall, the grips are in Fine condition as not original to the gun.

Finish Originality: Original to the parts, the grip safety is a replacement.

Overall Condition: This pistol retains about 85% of its metal finish. The balance is mostly in scattered surface oxidation. Most is minor and appears as frosting, but there is some more notable oxidation on the left of the trigger guard and the left of the frontstrap. There are scattered minor nicks, scuffs and scratches and there is a light “idiot mark” under the slide stop. The action shows light operational wear. The screw heads range from sharp to lightly tool marked with strong slots. The markings are clear. Overall, this pistol is in about Very Good condition.

Mechanics: The action functions correctly. This pistol has a tight slide and a crisp trigger. We did not fire this pistol. As with all used firearms, a thorough cleaning may be necessary to meet your maintenance standards.

Box, Paperwork & Accessories: This pistol comes with a total of two 7-round magazines, marked “COLT / .45 AUTO.” on the baseplates. The magazines have operational wear, some light oxidation, intact feed lips and strong springs.

Our Assessment: Colt Combat Commanders are inherently desirable pistols. Everything you love about the 1911, but just a little smaller, lighter, and more concealable. This example is a particularly interesting one, perhaps most interesting to those who are from or have an interest in Texas, specifically the city of Tyler, Texas. Let’s start with the donuts.

While no documentation was included with this pistol, there have been other examples of the “Robby Shipley Special” seen, and they all have nickel finish (some bright, some satin), they all have Gold Cup-style triggers and grooved frontstraps, and they all have the same marking on the right of the dust cover. Those who are not familiar with the South may be forgiven for not recognizing Robby Shipley’s name, but he is one of the descendants of Lawrence Shipley, founder of Shipley’s Do-Nuts. Founded in Houston in 1936, Shipley’s Do-Nuts has been providing customers with hot coffee and delicious donuts ever since.

It appears that Robby ordered about 100 Combat Commanders from Colt in the 1970s which were given as gifts to various friends and acquaintances, apparently most or all in Texas. The markings on this pistol indicate that it was given to one Baker Steven Lucas, and boy do we hope that it was Baker Lucas Jr. and not Baker Lucas III! Baker Steven Lucas Jr. was a staple of Tyler, Tx, serving in the United States Army during WWII as a Captain, making a fortune in real-estate after the war, and serving as the city’s mayor for eight years from 1970 to 1978. Perhaps Lucas Jr. sold Shipley’s their first location in Tyler, or perhaps he was just a good customer who enjoyed donuts. In any case, it is much more likely that Lucas Jr. was once a Municipal Judge in Texas than his son.

After his father died in a car accident in 1985, Baker Steven Lucas III took over the family business, but was not nearly as successful as his father. Lucas III was losing money, took out a large loan from his mother which he was unable to pay back, and she had just decided that he was to be written out of her will when she tragically died in her home. Originally considered to be an accident, later investigation uncovered new evidence, Lucas III was tried and convicted of murdering his mother.

As Lucas III doesn’t appear to be the sort of person who would be a municipal judge, much less the recipient of a custom Combat Commander from the region’s finest purveyor of donuts, we are confident that this pistol was gifted to Baker Lucas Jr. In any case, as a “Robby Shipley Special”, this is a very interesting pistol for collectors, and this one likely has a little more story to it than any of the others. You donut want to miss out on this one. Please see our photos and good luck!