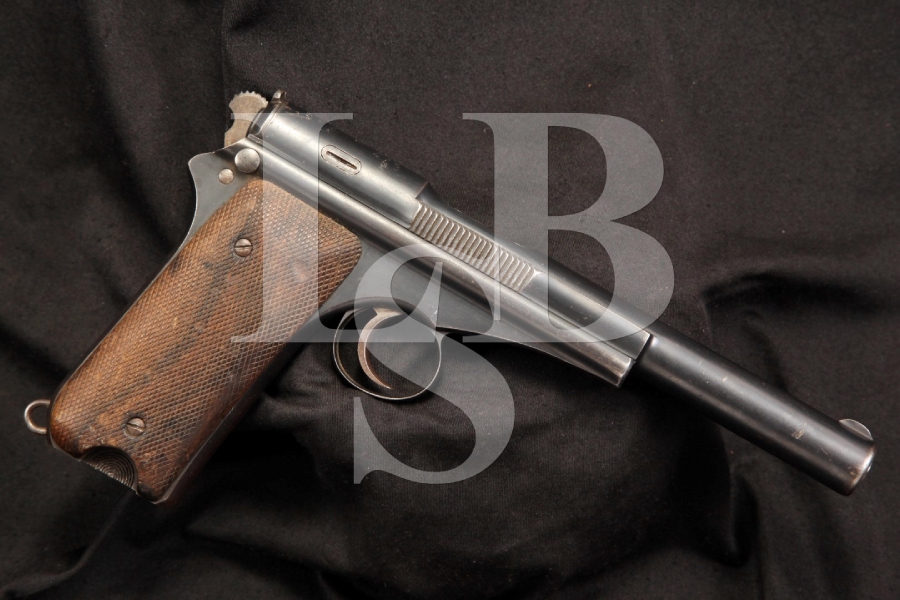 Make: Esperanza Y Unceta Model: Pistola Campo-Giro de 9mm Modelo 1913-16 Serial Number: 7100 Year of Manufacture: circa 1917 Caliber: 9mm Largo Action Type: Single Action, Semi-Automatic with Removable Magazine Markings: The top of the slide behind the ejection port is marked “Camp-Giro / PAT. 34798-54214 / 1904-1913”, with a 5-pointed star surrounded by a wreath (Eibar used a 5-pointed star as a proof, but we can’t find one with a wreath) and “Esperanza / Y / Unceta / GUERNICA”. The left side of the frame is marked “< Pist.a aut.a mod. 1913-16 > / 7100”. The left rear of the frame at the tang is marked with a 3-pointed star inside a circle which is believed to be a mark indicating issuance to the Spanish Military. Barrel Length: 6 ½” Sights / Optics: The front sight is a short rounded blade fixed to the slide. The rear sight is a “U” notch fixed to the top rear of the bolt. This is unique design in that most semi-autos of this type have the rear sight located on the slide. Stock Configuration & Condition: The grips are checkered walnut that are dark with oil staining. They show heavy wear with mars on each side. There are no chips or cracks noted. The grips rate in about Good overall condition. Type of Finish: Blue Finish Originality: All Original Bore Condition: The bore is gray and the rifling is shallow. There is light erosion in the front half of the bore. Overall Condition: This handgun retains about 82% of its metal finish. There is thinning on the front edges of the slide and frame and the bottom edge of the front strap. The slide shows handling marks along its length with a sharp compression mark on its right side about 1” from the muzzle and compression marks on the rear sight ears. The wedge through the back of the slide shows compression marks on both sides. The slide serrations show surface loss and light wear with tiny compression marks on the edges of the left side. The sides and underside of the frame, the front strap and the backstrap also show handling marks and surface frosting. There is erosion around the lanyard ring at the bottom of the backstrap. The hammer serrations are sharp but the right corner of one of the edges is broken off. The grip screws are disfigured. The markings are clear. Overall, this handgun rates in about Fine condition. Mechanics: The action functions correctly. The hammer has a half-cock safety as well as a manual safety on the frame. The trigger shows a fair amount of creep. We did not fire this handgun. Box, Paperwork & Accessories: This pistol comes with one blued 8-round magazine with the serial number “10382” marked on the follower. The magazine has a 5-pointed star inside a wreath on the left side, possibly a Spanish proof. There are circular serrations at the bottom of the magazine for gripping. The magazine shows very light wear and a scattering of solid erosion on its left side. The floorplate shows thinning on its edges with a compression mark on its rear tab. The serrations on the right side are distressed. Overall, the magazine is in Very Good condition. Our Assessment: From Wikipedia: “The Campo-Giro was a blowback operated semi-automatic pistol, chambered for the 9mm Largo cartridge, named for its designer, Colonel Don Venancio López de Ceballos y Aguirre, Count of Campo-Giro. The pistol was adopted for the Spanish army in 1912 as the Pistola Campo-Giro de 9mm Modelo 1912. After an unknown number of Modelo 1912 pistols had been manufactured, an improved version was developed, and in January 1914 became Modelo 1913. The Model 1913 was manufactured by Esperanza y Unceta and the increased orders triggered their move to a new factory in Guernica. During 1914, 1,300 pistols were made before production was halted to include new modifications. Campo-Giro patented new improvements in 1913, 1914 and 1915, resulting in a redesigned frame, redesigned mainspring and the magazine release being moved to the bottom of the grip. The improved model was adopted in September 1916 as the Pistola Campo-Giro de 9mm, Modelo 1913-16.” The first models were delivered in 1917 and the last contract was delivered in 1920. By 1921, it was replaced by the Astra Model 400 (Modelo 1921), and many were re-issued during the Spanish Civil War in the 1930s. A total of 13,625 were produced with 13,178 going to the Spanish military (from http://www.carbinesforcollectors.com/campo.html). This pistol is in Fine condition with about 82% of its original finish remaining. The pistol doesn’t show any erosion in its finish. It has a mark on the frame indicating it was produced for the Spanish Military – one of 13,178 pistols made. The magazine is not numbered to the pistol. Still, there weren’t all that many made and fewer still to have survived in this Fine condition. This should be a hit with collectors of military handguns and collectors of Spanish military hardware in particular.