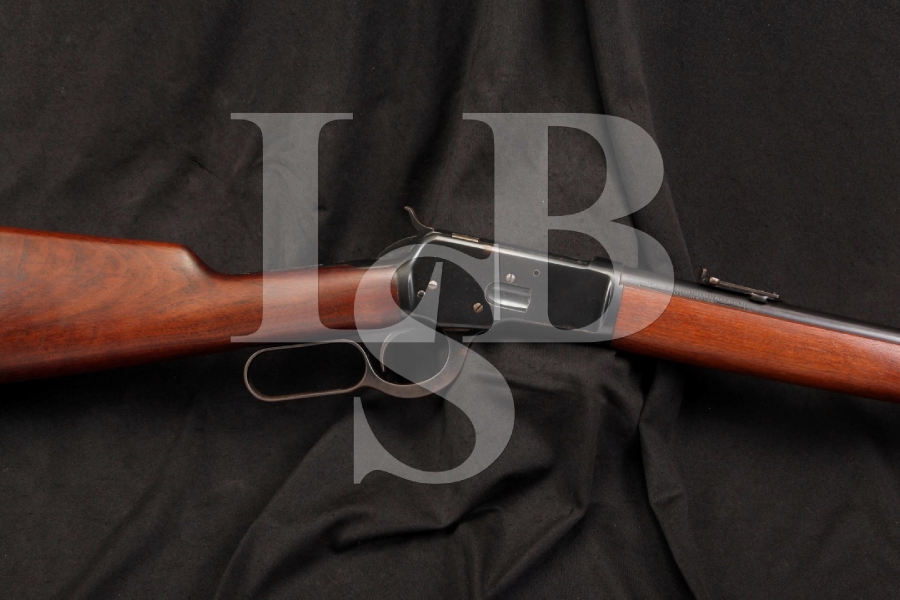 Make: Winchester Repeating Arms Model: 1892 Saddle Ring Carbine Serial Number: 969243 Year of Manufacture: 1926 Caliber: .32-20 Winchester (.32 Winchester Center Fire) Action Type: Lever Action with Full Length Tubular Magazine Markings: The left side of the barrel is marked “Model 92 – Winchester – 32 W.C.F. / Trade Mark”. The top of the barrel and receiver are marked with a circled “WP” proof. The underside of the receiver is marked “969243” at the front and “19” on the left side of the lever. The right side of the barrel is marked “MADE IN U.S.A WINCHESTER REPEATING ARMS CO. / NEW HAVEN, CONN.” The top of the barrel and receiver are marked with a circled “WP” proof. The upper tang is marked “WINCHESTER / TRADE MARK / MADE IN U.S.A.” Barrel Length: The round barrel with full length magazine tube is 20” in length. Sights / Optics: The front sight is a Patridge style blade pinned to a slotted rectangular base fixed to the barrel. The rear sight is a folding ladder sight dovetailed into the barrel. When the ladder is folded down, a flat topped “U” notch sight is presented. When the ladder is folded up, there is a “U” notch on the top of the slider. The right side of the ladder is marked from “0” to “20”. Stock Configuration & Condition: The two piece stocks are walnut with a lacquered finish, straight grip and carbine shaped steel buttplate. The forend is held with a barrel band. The buttstock is oil stained at the right side and around the receiver and tangs. The forend shows light oil staining around the barrel band. The forend shows a few very light compression marks on the underside and left side. The buttstock shows light handling marks with two compression marks on the right side: one small sharp mark and one long shallow mark. The LOP measures about 13” from the front of the trigger to the back of the buttplate, which shows thinning, tiny compression marks and spots of solid erosion. The finish has developed a plum colored patina. The buttplate is in about Very Good. The stocks are in Fine overall condition. Type of Finish: Blue Finish Originality: Original Bore Condition: The bore is bright and the rifling shows very light wear. There is no erosion in the bore, but there are one or two very faint tool marks near the muzzle. Overall Condition: This rifle retains about 85% of its metal finish. The crown of the muzzle and the first ½” of barrel behind the muzzle show light erosion. There are very few light handling marks between the muzzle and the magazine hanger on the right side of the barrel and magazine tube. The magazine hanger shows thinning on its front edge and the barrel band shows thinning on both sides. The receiver shows two marks through the finish on the left side and a sprinkling of very light pinprick surface erosion on the right and under side. The lever shows pinprick surface erosion over its surface and has developed a plum colored patina. The upper tang shows thinning and frosting. The lower tang shows a small spot of surface loss. The screw heads mainly sharp, but show marks of a screwdriver and the rear top tang screw is disfigured. The hammer checkering shows light wear. The markings are clear. Overall, this rifle rates in about Fine condition. Mechanics: The action functions correctly and appears very tight. The hammer has a half-cock safety position and the trigger is crisp. We did not fire this rifle. Box, Paperwork & Accessories: The loop is present on the left side of the frame, but the saddle ring is missing. Our Assessment: Settlers, lawmen, and cowboys appreciated the convenience of being able to carry a single caliber of ammunition which they could fire in both pistol and rifle. The .32-20 Winchester was the first small-game lever-action cartridge that Winchester produced. It was initially introduced as a black-powder cartridge in 1882 for small-game, varmint hunting and deer, although it is now considered too light for deer. Colt manufactured the Single Action Army revolver in this cartridge a few years later. This vintage Winchester 1892 saddle ring carbine is in Fine condition with about 85% of its original finish remaining. It shows a few spots of thinning with pinprick surface erosion on the receiver and lever. The action is tight and the bore is bright with very light wear. It is complete with a vintage ladder sight. This rifle probably has a lot of stories to tell and will make a nice addition to a collection of vintage Winchester firearms. If it gets past the collectors it will made a great saddle gun or general purpose rifle for throwing in the back window of your pickup truck when out in the boonies. With its nice bore, it ought to be deadly on coyotes.