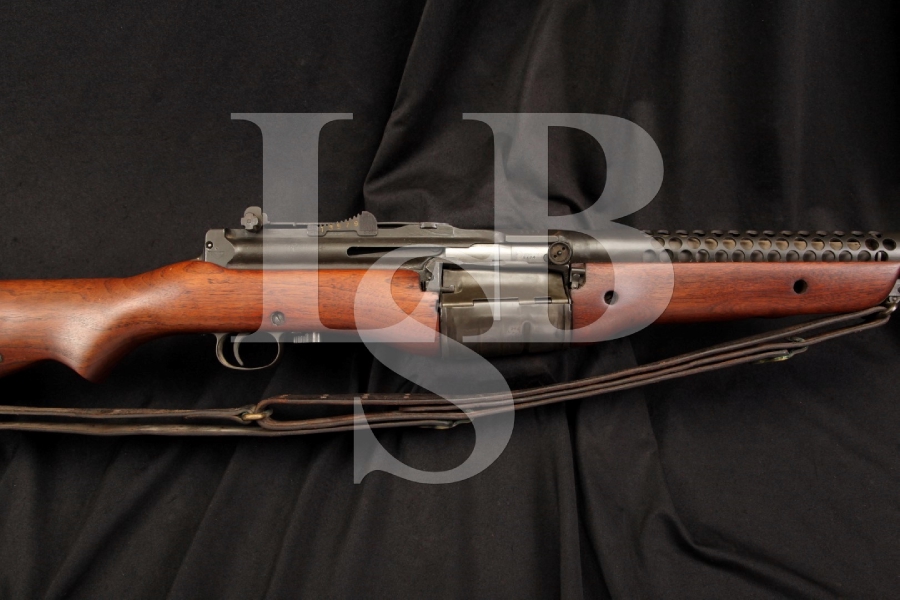 Make: Johnson AutomaticsModel: 1941Serial Number: 3577Year of Manufacture: 1941-1945Caliber: .30-06 SpringfieldAction Type: Semi-Automatic with 10-Round Internal Rotary MagazineMarkings: The top of the receiver is marked with patent information, the serial number and “’JOHNSON AUTOMATICS’ / MODEL OF 1941 / MADE IN PROVIDENCE, R.I., U.S.A.” The right rear of the receiver is marked “CRANSTON / ARMS / CO” in an inverted triangle. The face of the metal barrel shroud is marked “.30-06” on top and “41” on the bottom; this piece of circular metal is actually attached to the barrel. The bottom of the stock to the rear of the magazine is marked “1”. Barrel Length: Approximately 22” Sights / Optics: The front sight is a post set between two protective ears. The rear sight is a windage adjustable aperture. The adjustment knob functions. The aperture is set on an elevator that is marked “M2” on the left. It is marked “METERS 0-1000” and “1 3 5 7 9” on the right. Stock Configuration & Condition: The two piece hardwood stock has a pistol grip, several holes for mounting screws, a metal barrel shroud, two sling swivels and a metal buttplate. It has a few small scratches, some paint flecks and small rough areas to the rear of the receiver. The LOP measures 13 1/8 from the front of the trigger to the back of the buttplate. The stock rates in about Fine to Excellent overall condition. Type of Finish: ParkerizedFinish Originality: OriginalBore Condition: The bore is semi-bright and the rifling is deep. There is no visible erosion. The bore shows an M.E. of 0.5. Overall Condition: This rifle retains about 95% of its metal finish. The balance of the finish shows light marks, some paint flecks, light discoloration and a few small areas of pinprick surface erosion. The buttplate shows some wear. The screw heads show use. The markings are deep. Overall, this rifle rates in about Fine condition. Mechanics: The action functions correctly. We have not fired this rifle. Box, Paperwork& Accessories: The rifle comes with a worn leather sling that shows cracks, discoloration and oxidation on the metal. It is in about Very Good condition. Our Assessment: This Johnson Automatics Model 1941 is in NICE shape. We don’t see these much as not many were made and those that are still around live in very nice safes with other very collectible rifles. Now you have the chance to own one. Some basics from Wikipedia: “The M1941 Johnson Rifle was an American short-recoil operated semi-automatic rifle designed by Melvin Johnson prior to World War II. The M1941 competed unsuccessfully with the U.S. M1 Rifle…The M1941 rifle used the energy from recoil to operate the rifle. As the bullet and propellant gases moved down the barrel, they imparted a force on the bolt head that was locked to the barrel. The barrel, together with the bolt, moved a short distance rearward until the bullet left the barrel and pressure in the bore had dropped to safe levels. The barrel then stopped against a shoulder allowing the bolt carrier to continue rearward under the momentum imparted by the initial recoil stage. The rotating bolt, which had eight locking lugs, would then lock the bolt. Following, a cam arrangement then rotated and unlocked the bolt to continue the operating cycle. One disadvantage of this design was its impact on the use of a bayonet, as the complex movements of the barrel would be subject to unacceptable stress when a bayonet thrust was used. The Johnson rifle utilized a unique 10-round rotary magazine and a two-piece stock, the weapon using the same 5-round stripper clips used by the M1903 Rifle. This system had some advantages over the M1 Rifle, including less perceived recoil and greater magazine capacity. Unfortunately, the Johnson’s recoiling barrel mechanism resulted in excessive vertical shot dispersion that was never fully cured during its production life, and was prone to malfunction when a bayonet was attached to the reciprocating barrel. The Johnson also employed a number of small parts that were easily lost during field stripping.”