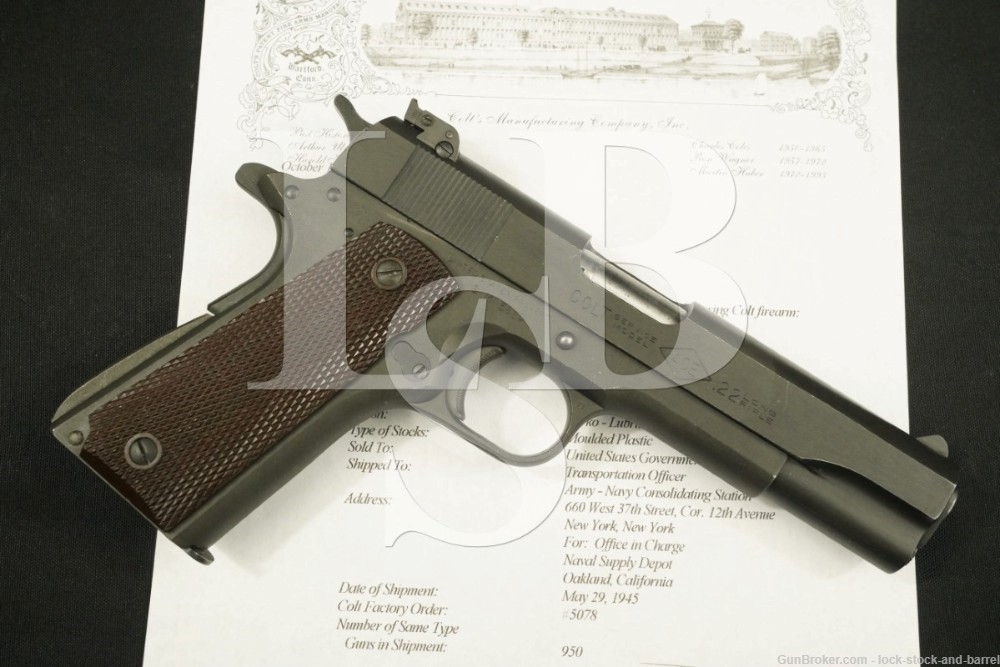 Stock Configuration & Condition: The grips are checkered brown plastic with reinforcement ribs on the inside and reinforcement rings around the grip screws. The reinforcement rings on the left panel are slightly larger and the mold-number marking on the inside is in the center of the ribs, consistent with Colt produced plastic stocks. The right panel has the starred “K” and mold-number marking placement of Keyes Fibre Co.. The left panel has only a few minor marks, most notable in the edges of the rings and at the bottom edge of the checkering. The right panel has more notable wear in the rings and a few blunted checkers. The checkering is well defined, generally sharp. There are no chips or cracks. Overall, the grips are in Fine condition as at least partially not original to the gun.

Overall Condition: This pistol retains about 97% of its metal finish. There are some scattered minor nicks and scratches, mostly on the right flats of the slide and frame. The action shows light operational wear. The screw heads are sharp. The pin heads are unmarred, though there is some finish loss on the end of the slide-stop shank on the right of the frame. The knurling on the trigger, hammer, safety and slide stop are well defined. The markings are clear and crisp. Overall, this pistol rates in about Fine-Excellent condition.

Mechanics: The trigger pull is crisp and there is a barely perceptible amount of side-side play between the slide and frame. The action functions correctly. We have not fired this pistol. As with all used firearms, a thorough cleaning may be necessary to meet your maintenance standards.

Box, Paperwork & Accessories: This pistol comes with one magazine and a photocopy of a Colt Historian letter. The thumbpiece serrations, follower and floorplate markings are correct for a Service Model Ace. The magazine has only very light operational wear with intact feed lips and a strong spring. The letter confirmed that this serial number shipped on May 29, 1945 to the Naval Supply Depot in Oakland, California in a shipment of 950 of the same type guns.

Our Assessment: The 1911 and 1911-A1 pistols served the military of the United States from 1911 to 1985, through two World Wars and the Korean and Vietnam wars. They gained a reputation as a reliable handgun with plenty of stopping power, and are held in high regard by those who have used them. Yet it could be expensive to train thousands of soldiers to use the 1911 while feeding it .45 ACP, moreso at the outset of WWII when the US Military would see the greatest expansion in its history. The Colt Ace had been introduced in 1931 as a .22 Long Rifle version of their Government Model, but it was dimensionally different and had significantly less recoil than the real thing. David “Carbine” Williams adapted his floating-chamber design to intentionally increase the recoil of the .22 LR cartridge to the point that it was similar to that of .45 ACP, even allowing the use of the same recoil spring. This became the Service Model Ace and allowed for drastically reduced practice costs when training GIs to use their 1911s. This example was produced in 1945 and is in Fine-Excellent condition with only a few light marks in its Parko-Lubrite finish. This pistol shipped to the Naval Supply Depot in Oakland after VE-day, but the war in the Pacific would go on for nearly two months longer. Given its condition, it’s unlikely that this pistol saw extensive use training soldiers, but it is a fantastic specimen of a Service Model Ace, sure to take a prized place in a Colt or US Military handgun collection. Please see our photos and good luck!