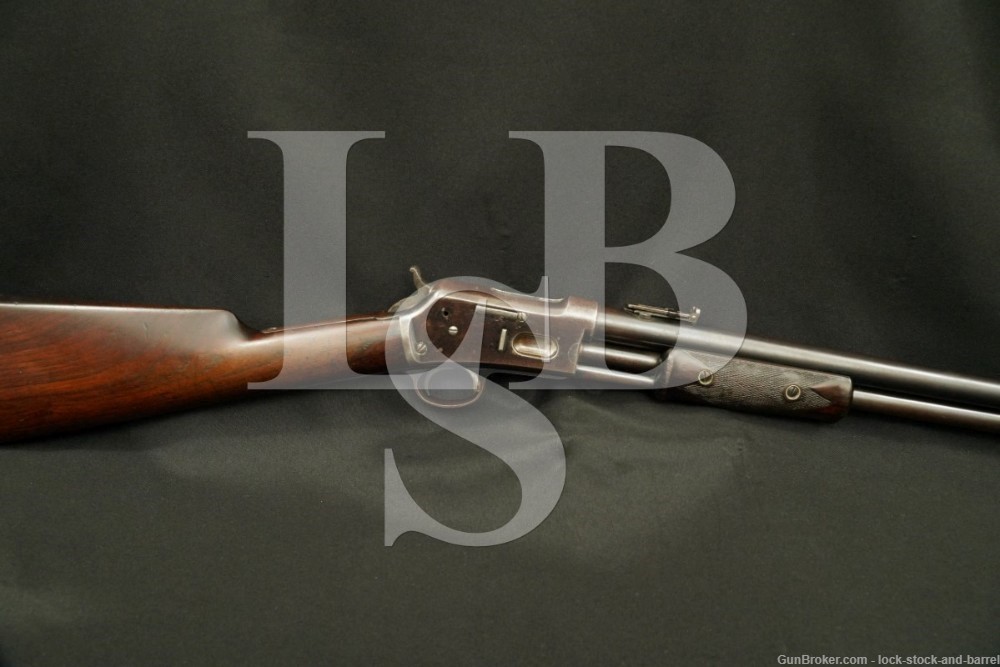 Sights / Optics: The front sight is a blade integral to a rectangular base, fixed to the front of the barrel behind the front barrel band. The rear sight is a Colt Lightning Carbine sight, dovetailed to the rear of the barrel. The sight presents a “V”-notch when folded down. When folded up, the sight has a “V”-notched slider on a ladder marked from 2-9. The ladder’s spring is still strong and holds the sight firmly when folded up, but the slider is loose on the ladder and will fall to the bottom position unless raised all the way up, where it is a little tighter.

Stock Configuration & Condition: The stocks are walnut with a two-piece checkered slide handle, straight grip, straight comb and steel carbine buttplate. The stocks have scattered nicks, dings, scuffs and scratches. The left panel of the forend has a very thin crack at the rear edge near the bottom. The buttstock has small losses to each side of the top tang in the front of the wrist and a pair of short cracks at the rear edge of the bottom tang. The checkering is well defined. The buttstock is slightly shy to the metal, likely indicating refinishing. The LOP measures 13 1/8″ from the front of the trigger to the back of the buttplate. The plate has gone to a moderate-dark patina with wear at the heel and toe as well as some minor nicks and scrapes. Overall, the stocks are in Very Good condition as antique.

Bore Condition: The bore is semi-bright with well defined rifling. There is some scattered light erosion and infrequent minor pitting. Starting just behind the muzzle, the top-right groove has some tool marks going back a few inches.

Overall Condition: This rifle retains about 40% of its metal finish. Strongest finish is in protected areas such as the bottom of the barrel, top of the magazine tube, around the hammer, on the sides of the trigger guard and the bottom tang and bottom of the receiver to each side of the trigger guard’s rib. Other surfaces have scattered finish, mottled with areas which have gone to a light patina and scattered light surface oxidation. Most edges are worn to white. There are scattered nicks, scuffs and scratches. The left of the magazine tube has two notable dents about 2″ and 4″ behind the barrel band. There are arcs of wear on the left of the receiver from the saddle ring. There are tool marks around most screw heads. The magazine bracket screw appears to be a replacement with a crisp slot and strong blue finish, but it is not engaging the threads properly, turning freely in the bracket. Other screw heads range from sharp to disfigured with serviceable slots. The markings are clear with good detail in the rampant colt. Overall, this rifle is in Very Good-plus condition as Antique.

Mechanics: The action functions correctly. This rifle has a bolt-lock switch in the front of the trigger guard, typical of early production rifles. We have not fired this rifle. As with all previously owned firearms, a thorough cleaning may be necessary to meet your maintenance standards.

Our Assessment: Around the 1880s, Colt was looking to diversify but both Remington and Winchester had the rifle market sewn up. Besides their lever-actions, there were also new slide action rifles: the user pumped a moving arm set under the barrel and around a tubular magazine, kicking out a spent round and loading a new one with every “stroke”. Colt concentrated on this design concept and in 1884 introduced a gun with a short slide action that was so slick and so fast; they dubbed it the “Lightning”. The advertising said it all: “Nothing was faster than lightning”. Dr. William H. Elliot, a dentist by trade, designed the gun. Half hobby, half side job, Elliot liked to tinker with things and over the course of his life came up with at least 130 inventions. Since he lived in Ilion, New York, he often walked down to neighboring Remington and showed them the interesting things he was working on and when Remington didn’t bite on his new rifle design, he sent a letter to Colt, who loved it. The handy rifle’s tubular magazine could hold as many as 16 rounds, depending on caliber, which made it very attractive. It came in three varieties: small, medium, and large. Each of these guns had the same set up, with a deep-blued finish, case hardened hammer, American walnut stock and fore-end, and open rear and front sights. They were light, going 6.5-pounds or so. The medium frame guns, chambered for .32-20, .38-40 and .44-40 Winchester calibers, marketed as 32, 38 and 40 CLMR (Colt Lightning Magazine Rifle), were the most popular, using some of the same cartridges as Colt’s Single Action Army and with ammunition already being produced for Winchester’s rifles. Ultimately, the rifle was discontinued as Winchester and Colt came to the agreement that Winchester would produce rifles, Colt would produce handguns, and nobody needed to make the market competition get ugly. This example is a fairly early production medium frame made in 1885 and chambered for .44-40. It is a desirable Carbine model with a 20″ round barrel, saddle ring on the receiver, and carbine sights and buttplate. The rifle has some neat early features including the “ELLIOT’S PATENT” barrel address as well as the slide-lock-switch in the trigger guard which would be later discontinued. Despite coming up on 140 years old, the rifle still retains about 40% of its original blued finish. Perhaps due to the saddle ring, it also still retains a nice, detailed rampant colt marking on the left of the receiver, a light marking which is frequently seen incomplete and even completely worn away. While this rifle would likely have seen exclusive use with black powder, it still retains a fairly strong bore. This will make for a nice example of the Colt Lightning Carbine and would be an excellent addition to any safe in America. Please see our pictures and good luck!