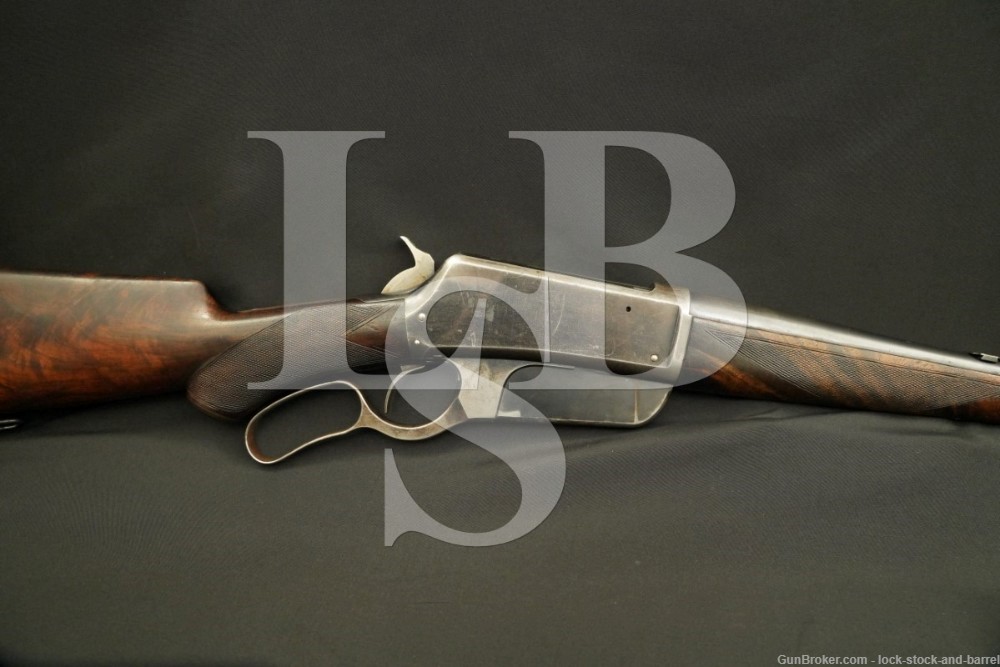 Sights/Optics: The front sight is a replacement beaded blade dovetailed into a serrated base that is fixed to the barrel. The rear sight dovetail notch is filled. The left side of the receiver is drilled and tapped for the included Williams aperture sight.

Stock Configuration and Condition: The stocks are two-piece fancy checkered deluxe walnut with ebony tipped schnabel forend, pistol grip with hard rubber Winchester cap, straight comb, and a steel crescent butt plate. There is a sling swivel on the belly of the buttstock and a sling eyelet on the underside of the barrel. The sling mounts are not mentioned in the Cody letter, and may be after-market installed. There are scattered minor nicks and dings scattered about the wood along with a series of light scrapes on the left side of the buttstock. The edges of the forend have intermittent minor nicks and dings. The LOP measures 12 3/4″ from the front of the trigger to the back of the buttplate. The plate has light surface oxidation throughout along with a few minor nicks. Overall, the stocks are in Very Good-Fine condition, as refinished Antique.

Bore Condition: The bore is semi-bright with well-defined rifling. There is very minor erosion in a few spots, and minor stubborn fouling persists along the grooves. Our muzzle erosion gauge reads an ME of slightly more than 1.75.

Overall Condition: This rifle retains about 77% of its current metal finish. The majority of the finish remains on the barrel which has intermittent spots of minor thinning, intermittent peppering of minor surface oxidation, and scattered light nicks and drag lines. Much of the receiver/bolt/hammer/magazine/lever/tangs have gone to white, but more consistent blue remains on the posterior edges of the receiver on either side of the hammer. The tangs and lever have spots of minor surface oxidation. The magazine has quite a bit of finish, but the chin has gone to white. The screw heads range from lightly to moderately tool marked, all have usable slots. Most markings are clear—the patent marks are a bit diffuse. Overall, this rifle is in Fine-plus condition, as Antique.

Box, Paperwork, and Accessories: This 1895 includes a Williams aperture sight and a letter from the Cody Firearms Museum.

Our Assessment: The 1895 Winchester was the first lever action model to incorporate a fixed box magazine (i.e., it could not be removed). This is the model Teddy Roosevelt used for hunting both here in the United States and in Africa—he referred to it as his “Big Medicine”. With quick handling characteristics, a box magazine, and spitzer—more aerodynamic, accurate—bullet capability, the Model 1895 completely changed the world of sporting rifles. This rifle pattern was utilized by major powers worldwide, with Russia alone purchasing nearly 300,000 1895 rifles in the lead-up to World War I. In 1898, the United States ordered 10,000 1895 rifles in musket form for use in the Spanish-American War (the war ended before they could be delivered, however). 100 of those were issued for field testing in the Philippines and the remaining 9,900 were later sold to a private business. Many 1895 rifles were shipped to the new Cuban government in 1906 and some even found their way to Pancho Villa’s troops in Mexico. The U.S. Government also ordered carbines, but we are, as of this writing, unable to find records as to just how many. This saddle ring carbine was made in 1923 during the inter-war years. This example, chambered in .30 U.S, is a very early commercial version. Note the flat slab sides of the receiver, the early magazine profile, and the rounded-top profile of the bolt. The original owner had this rifle custom-ordered from the factory with gorgeous deluxe walnut that features a schnabel forend, fancy checkering, and a capped pistol grip. Included also is a letter from the Cody Firearms Museum that confirms this factory special feature! This 126 year old rifle is in wonderful shape, mechanically sound, and has a rather bright bore. The plain fact is, Winchester rifles were exceedingly well built, evidenced by this rifle’s condition after a century and a quarter. Whether you’re looking to add to your Winchester collection or want a classy hunting rifle, this would be a great addition to any safe in America. Good luck and happy bidding!