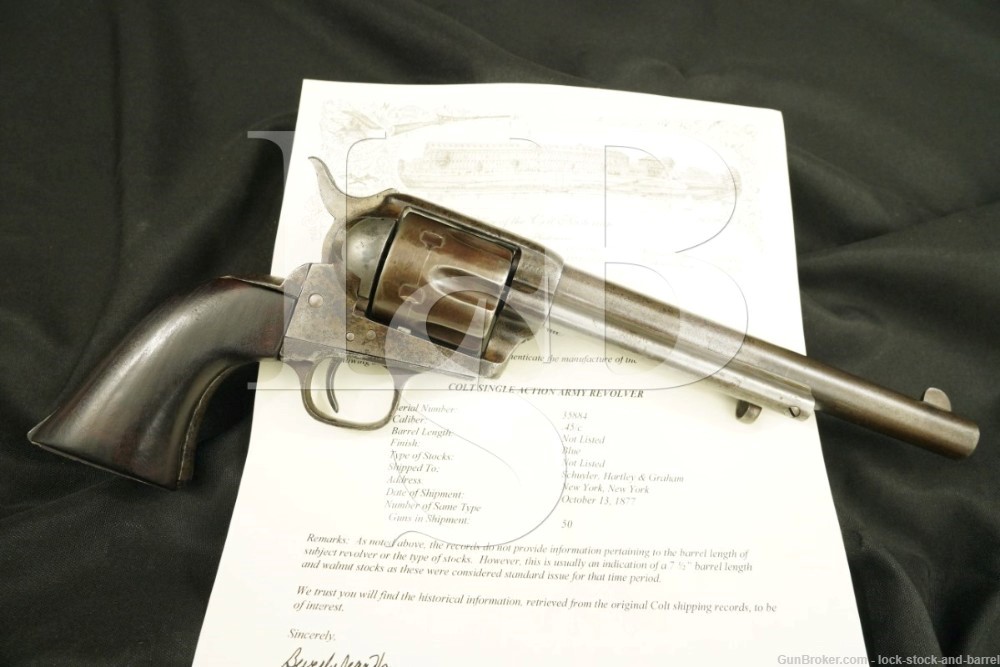 Stock Configuration & Condition: The grip is a one-piece smooth walnut. The bottom-left has an incomplete “US” marking, the bottom-right “RAC”, neither of these markings are genuine. The inside of the grips have leather shims, but the grip is alternately proud and shy to the grip frame. The wood shows light handling wear with a few scattered light nicks and scratches. There is a grain-line crack in the front edge on the right toward the bottom and another, thinner crack on the bottom face of the right side toward the rear. Overall, the grips are in about Very Good condition as Antique and not original to the gun.

Type of Finish: Some areas show cold blue, there is some scattered remaining silver plate on the grip frame and frame.

Finish Originality: Refinished. Given that the revolver originally shipped to Schuyler, Hartley & Graham, it is possible that they had the silver plate done. The gun has since seen worn or eroded areas polished and treated with cold-blue.

Bore Condition: The bore is gray with well defined rifling. There is scattered light-moderate erosion in the bore as well as some scattered moderate pits.

Overall Condition: This revolver retains about 7% of its current metal finish. There are scattered spots of remaining silver plate, mostly on the grip frame, loading gate and frame. These spots have gone to a very dark color. The remaining surfaces have mostly worn or been polished to white, or have gone to a light-moderate patina. There are several scattered nicks, scuffs and scratches. The rear face of the cylinder has a more notable nick on the outside edge at the mouth of one chamber. The cylinder has a turn-line. There is some scattered light surface erosion. The firing pin has play in the hammer and its retaining pin is a replacement. Some screw heads are sharp and are most likely replacements, others are tool marked with serviceable slots. The markings range from clear to worn and incomplete. Overall, this revolver is in about Good condition as refinished and Antique.

Mechanics: The action functions correctly. The trigger is crisp. The cylinder has some rotational play when locked and but very little end-shake. The trigger has a little bit of creep. The mainspring shows grinding. The loading gate sits proud to the frame and doesn’t have a proper detent to stay closed. We did not fire this revolver. As with all used firearms, a thorough cleaning may be necessary to meet your maintenance standards.

Box, Paperwork & Accessories: This revolver comes with a Colt Historian letter which states that the revolver shipped October 13, 1877 to Schuyler, Hartley & Graham in New York, New York in a shipment of 50 guns of the same type.

Our Assessment: Colt’s Single Action Army is, perhaps more than any other, an iconic American pistol. It was the U.S. issue sidearm for the last two decades of the 19th century, used by pioneers, outlaws and lawmen across the expanding nation, and captivated audiences on the silver screen and television (and still does, today). This example was originally shipped to Schuyler, Hartley & Graham in New York City, one of Colt’s largest distributors and also a seller which frequently would have revolvers engraved or given new, premium finishes. This example may have been silver plated by the company, as there are some spots of remaining silver plate. The revolver shows its age, but its matching serialized parts and included Colt letter will add to its collectibility. It would also be a good candidate for a restoration project for the lucky winner. Please see our photos and good luck!