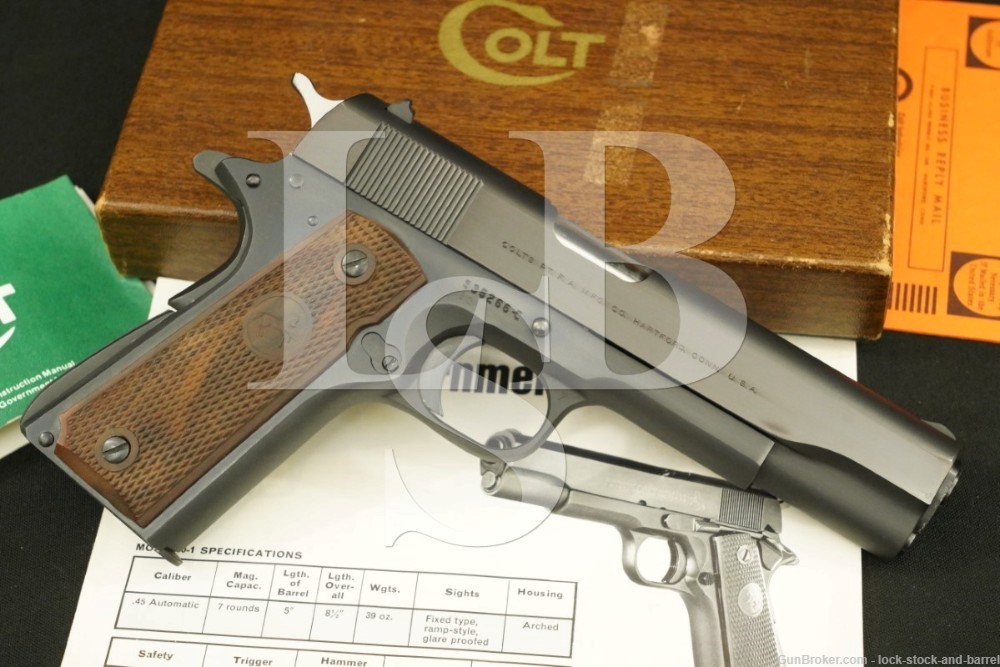 Stock Configuration & Condition: The grips are two-piece checkered brown plastic “Coltwood” panels with rampant colt in circle in the middle of each panel. The screw holes are just slightly stretched due to shrinkage (common with Coltwood grips). Otherwise, there is no notable wear or damage, only light handling marks. The checkering is sharp. There are no chips or cracks. Overall, the grips are in about Fine condition and would rate Excellent but for the shrinkage.

Overall Condition: This handgun retains about 98% of its metal finish. There is minor operational wear. The slide’s finish has a slight plum hue. There is a light scratch on the left of the frame under the slide stop. Otherwise, there are only light handling marks. The screw heads range from sharp to lightly tool marked with strong slots. The markings are clear. Overall, this pistol is in Excellent condition.

-Two-piece wood-grain cardboard Colt box. The label is model-matching, the serial number is hand-written on the bottom and the box shows light storage wear, mostly at corners.

-An assortment of factory paperwork including manual as well as the original sales receipt from March, 1971 are included.

-One 7-round magazine marked “COLT / .45 AUTO.” on the floorplate is included. The magazine shows minor operational wear with intact feed lips and a strong spring.

Our Assessment: The 1911 is one of the best pistols ever designed, seeing use in the US Military for the better part of a century and dominating pistol shooting sports for decades. This 1970 vintage commercial Government model is a great example of a post-war Commercial Government model. It is one of the scarce “BB” marked models, indicating the new collet-style Barrel and Bushing. While the collet bushing is most associated with the Series ’70 models, these BB marked guns preceded the Series ’70 name. Approximately 1,000 pistols were assembled with these bushings at the end of the “-C” serial range for commercial Government Model pistols with both the frames and slides stamped “BB” to indicate the new barrel bushing. The pistols were intended to test both manufacture and assembling of the new bushing style before the official launch of the new Series ’70. The pistol is in Excellent condition, appearing to have spent more time in its included box than out, showing minor handling wear and just a little of the shrinkage which is all too common for its Coltwood grips, though frequently far worse than is found on this example. This is a beautiful and scarce Colt pistol, perfect to add to any collection. Please see our pictures and good luck!