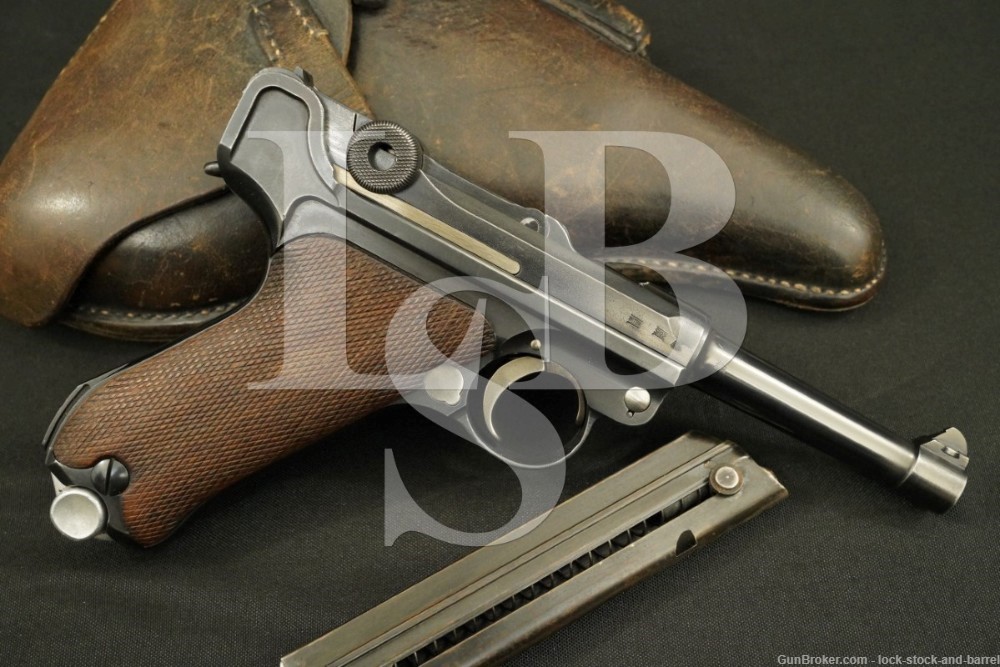 Stock Configuration & Condition: The grips are two-piece checkered wood. The grips have fairly even handling wear. There are some areas with more notably worn checkering around the edges, most notable at the top-front of the right panel. The checkering has blunt points, but the lines are well defined. There are no chips or cracks. Overall, the grips are in Very Good condition as likely not original to the gun.

Finish Originality: Refinished, some parts may be Force-Matched and some markings such as the “S/42” are not genuine.

Bore Condition: The bore is gray with well defined rifling. There is light-moderate erosion and pitting scattered through the bore.

Overall Condition: This pistol retains about 87% of its current metal finish. The finish is thinning at all edges. There is scattered minor erosion under the finish. There are patches of touch-ups on the frontstrap toward the bottom and on top of the front toggle link, these touch-ups have a reddish color. The strawed parts have muted some. There is finish wear on the top of the barrel extension to each side of the bolt and toggle-train. There is a spot of wear near the bottom of the frontstrap. The action shows operational wear. The screw heads are sharp. The markings are generally clear. Based on the condition of markings on surfaces which have been refinished, we believe that some markings are not genuine. The “S/42” marking on the front toggle link uses a different type-face than was used on G-code pistols. Overall, this pistol is in Very Good condition as refinished.

Box, Paperwork & Accessories: This pistol comes with a black leather flap-holster and a total of two 8-round magazines. The holster has “G. J. Ensink & Co. / OHRDRUF / 1937” and an eagle clutching swastika over “WaA163” waffenamt on the back. The holster shows moderate wear. It appears that the stitching is intact on the exterior, but the belt-loop stitching on the interior is fraying. One magazine has a blued body and an alloy floorplate marked “3248 / v” and with eagle over “63” Mauser manufacturer marking. This magazine shows scattered wear and surface oxidation with intact feed lips and a strong spring. The second magazine’s body has been refinished, appearing to be nickel or tin plated. The body has a faintly visible “1863” hand-scribed under the finish on the left. The alloy floorplate has been marked “8868 / a” and with “B|90” inspection marking. These markings are not genuine. The magazine shows minor wear with intact feed lips and a strong spring.

Our Assessment: The Luger (Pistole Parabellum or P-08) is perhaps the most aesthetically and ergonomically pleasing of all autoloading centerfire pistols. It is also one of the strongest, most accurate and most recognizable service pistols ever made. Georg Luger developed his famous pistol in 1898-1899 (starting with the Borchardt/Luger transitional pistol). The Luger is, essentially, a much improved Borchardt type pistol, which was itself based on the toggle action concept used by Sir Hiram Maxim in the world’s first practical machine gun. The Maxim shot its way to bloody fame in World War One, which also became the combat proving ground for the Luger Pistol. The Luger was so reliable and well liked that it was still being made and issued to German troops well after the P38 was adopted by the army. The largest percentage of Lugers were made by DWM, which became Mauser in 1930. This pistol’s markings indicate it is a Mauser Luger pistol manufactured in 1935, just before the Nazis were beginning to openly violate the Versailles treaty. Before this brazen act, the Germans rearmed secretly, in violation of the treaty. Codes were used for both the manufacturers and the manufacture years of arms, with the “S/42” and “G” markings on this pistol intended to obscure who made it and when. This example has matching serial numbers on the pistol, though some parts may be force-matched, and retains about 87% of its new metal finish. Some of the markings on this pistol, including the “S/42” manufacturer’s code, are not genuine, it is likely that the pistol was restored and the markings were applied at that time. This pistol is connected to a pivotal moment in history. For fans of the Luger or WWII small arms, this G-code Mauser Luger will make a nice addition to a collection. Please see our photos and good luck!