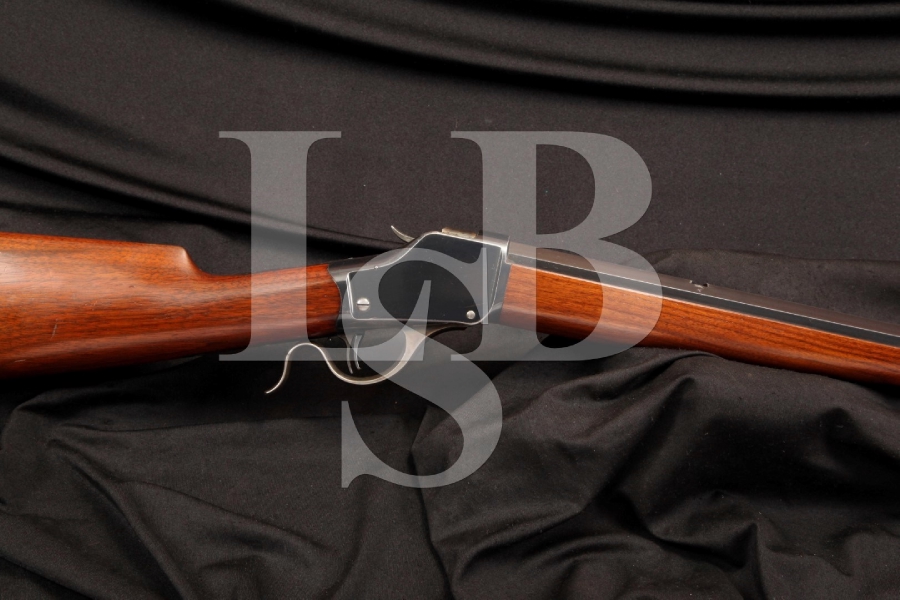 LSB#: 140604NW61 Make: Winchester Model: 1885 High Wall Serial Number: 110427 Year of Manufacture: 1919 (Proof House) Caliber: .38-55 Winchester Action Type: Lever Actuated Falling Block Single Shot with Close-Coupled Double Set Triggers Markings: The top of the barrel is marked “Manufactured By The Winchester Repeating Arms Co. / New Haven, Conn. U.S.A. Patented Oct. 7.79 May 28.07.” The underside of the barrel at the front of the forend is marked “3” (middle grade barrel weight). The top of the barrel at the receiver and the receiver ring are marked with a circled “WP” proof. The left shoulder at the receiver is marked “38-55”. The upper tang is marked “Pat. Oct. 7TH 79 / WINCHESTER / Trade Mark”. The bottom of the receiver in front of the chamber is marked “17” and the lower tang is marked “Pat. Oct. 7TH 79” and “110427”. Barrel Length: The number 3 weight octagon barrel is 29 ½” long. Sights / Optics: The front sight is a white beaded blade with a checkered rear face below the bead. It is dovetailed into the barrel. The rear sight dovetail is empty – missing the rear sight. There is a drilled, tapped and filled hole at the front of the upper tang for mounting a tang sight. Stock Configuration & Condition: The two piece stock is walnut with a straight grip and a blued steel crescent buttplate. The forend has a Schnabel tip with a black wedge shape pattern in the middle. The buttstock shows handling marks on both sides with two deeper compression marks on the left side. It also shows minor finish loss at the toe. The forend shows a small compression mark on the left lower edge behind its mounting screw and a two more marks on the left side in front of the screw. The LOP measures 13 9/16” from the front of the forward trigger to the back of the buttplate. The buttplate shows surface loss, light wear at the heel and toe, light handling Marks and a scattering of pinprick surface erosion. It rates in about Good condition. The stocks rate in about Very Good overall condition. Type of Finish: The rifle barrel and receiver are blued and the lever is case colored. Finish Originality: All Original Bore Condition: The bore is bright with very light wear in the rifling. There is no erosion. Overall Condition: This rifle retains about 85% of its metal finish. The barrel shows thinning on its edges and handling marks along its length from the forend forward. There is a small spot of pinprick surface erosion on the underside of the barrel about 2” from the muzzle and multiple compression marks on both sides of the rear sight dovetail. The receiver shows thinning on its edges, light but long scratches and a sprinkling of tiny spots of pinprick surface erosion on the left side. The right side shows tiny compression mark. The top tang shows several marks through the finish and the bottom tang shows thinning and a spot of surface loss from the lever, which shows handling marks. The hammer checkering shows light wear and the back edge of the hammer shows surface loss. The front screw on the lower tang is disfigured. The markings are clear. Overall, this rifle rates in about Fine condition. Mechanics: The action functions correctly. This rifle has closely coupled double set triggers. As the slack is taken up on the front trigger, it starts to press against the rear trigger, firing the rifle. The trigger breaks crisply at just over 5 lbs. We have not fired this rifle. Box, Paperwork & Accessories: None Our Assessment: This is a Winchester Model 1885 High Wall single shot rifle with a medium weight (#3) octagon barrel and closely coupled double set triggers. It is chambered in .38-55 Winchester. The Model 1885 was designed and first made by John Browning. Winchester bought the rights to the rifle and started producing them in 1885, a production run that lasted until 1920. Major Ned H. Roberts, inventor of the .257 Roberts cartridge, describing the Model 1885 as “the most reliable, strongest, and altogether best single shot rifle ever produced”. Winchester found it to be so strong that they used the action to test fire newly created rifle cartridges. This rifle is in Fine condition with about 85% of its original finish remaining. It shows marks through the finish in both the barrel and receiver, with a few scattered spots of pinprick surface erosion. The wood shows handling marks with some deeper compression marks on the left side of the buttstock and forend. This is a great find for the Winchester collector or collector of early American sporting rifles.