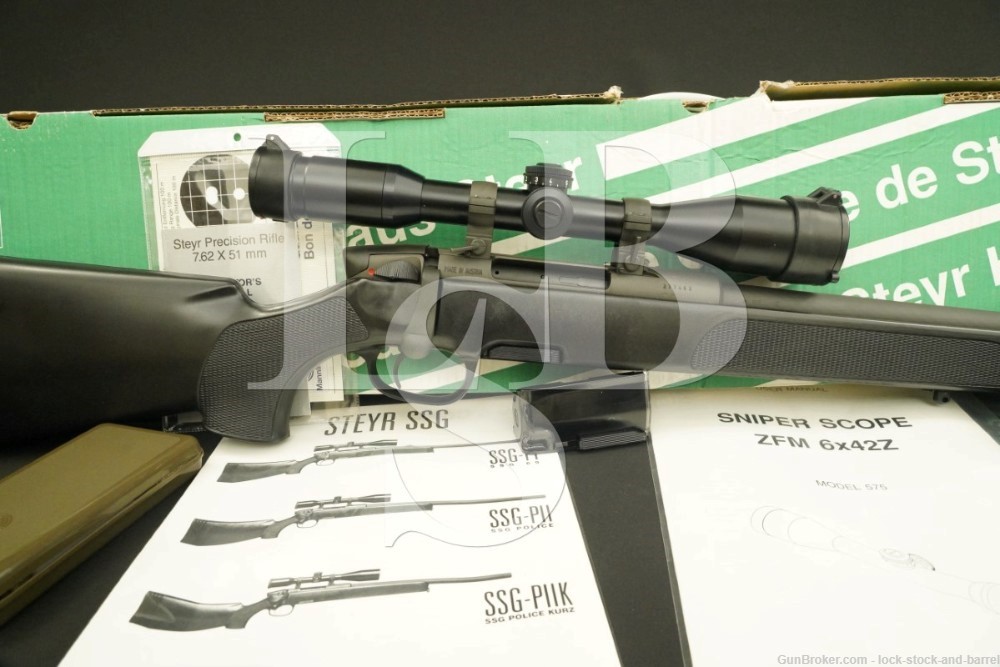 Sights / Optics: This rifle has no provisions for iron sights. The top of the receiver has an integral scope base with a set of quick detach rings serial-matched to the rifle. The rings are holding a Swarovski ZFM 6×42 Z scope. The scope has a few scattered light handling marks. There are no major defects. The glass is clear and the scope has a German post-style reticle. The scope rates in about Excellent condition.

Stock Configuration & Condition: The stock is checkered black synthetic with a pistol grip, inlet accessory rail on the bottom of the forend, a sling bar on the left of the buttstock with a swivel on the front of the forend, and a solid black rubber Steyr buttpad with three installed spacers. There are a few scattered little marks and scuffs, the most noticeable wear is on the bottom of the forend from previously installed accessories. The checkering is well defined. There are no chips or cracks. The LOP measures approximately 13 3/4? from the front of the trigger to the back of the buttpad with the spacers installed. The LOP is adjustable from 12 1/2″ to 14″. The pad has no notable wear or damage. Overall, the stock is in about Excellent condition.

Overall Condition: This rifle retains about 98% of its metal finish. There are a few scattered minor scuffs and light handling marks. The bolt shows light operational wear and the knob has minor handling wear. The screw heads are sharp. The markings are clear. Overall, this rifle rates in about Excellent condition.

Mechanics: The action functions correctly. The safety locks the bolt and disengages the trigger. There is a cocking indicator in the rear of the bolt sleeve. The trigger has a smooth, very light takeup followed by a crisp break. We did not fire this rifle. As with all used firearms, a thorough cleaning may be necessary to meet your maintenance standards.

Our Assessment: The Steyr SSG 69 was developed as a purpose-built sniper rifle for the Austrian armed forces, one of if not the first such factory produced sniper rifles. It featured a hammer-forged barrel which had a long engagement with the receiver, locking lugs on the rear of the bolt with a short, 60 degree throw, detachable rotary box magazine with a transparent rear face allowing the user to visually check how many rounds remained, and featured a synthetic stock and some synthetic parts for weight reduction. As the model designation indicates, the rifle was adopted by Austria in 1969 and continued in production through 2015 with a few different variants. The original had a fairly light profile barrel with iron sights but the later PII would have a bull barrel intended for use with an optical sight only, aimed more at the law enforcement and civilian markets than militaries. This one has the butterknife type bolt of the PI Model but has the heavier barrel without iron sights of the PII Police Model. We have seen some debate and the consensus is that it is a PI Model (as the box indicates) but just has a special order feature of no iron sights. No matter the case, this model is no longer in production, this would be a great opportunity for anyone who always wanted an SSG 69 but hasn’t managed to get their hands on one. Please see our photos and good luck!