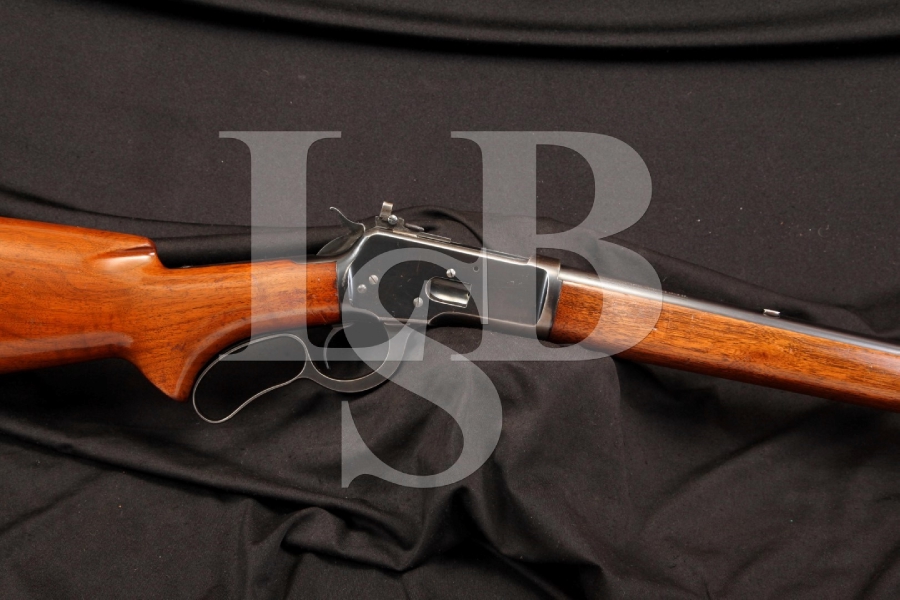 SOLD FOR:$5,030
LSB#: 140604NW22 Title: .218 Bee Make: Winchester Repeating Arms Model: Model 65 Serial Number: 1006700 Year of Manufacture: 1941-1947, Most Likely Post-WWII Caliber: .218 Bee Action Type: Lever Action with Half-Length Tubular “Button” Magazine Markings: The left side of the barrel is marked “Winchester Proof Steel”, “Model 65”, “Winchester / Trade Mark”, and “218 BEE”. The bottom of the receiver in front of the lever is marked “1006700” and to the left side of the lever with “S”. The top of the barrel and the receiver are marked with a “WP” proof. The right side of the barrel is marked “Made In U.S.A Winchester Repeating Arms Co. / New Haven, Conn.” The top tang is marked “Winchester / Trade Mark / Made In U.S.A.”. Barrel Length: 24” Sights / Optics: This rifle is mounted hooded beaded blade front sight on a stippled ramped base atop the barrel. There is a dovetail on the back of the barrel that is filled with a blank. There is an aperture sight mounted to the top of the bolt. The right edge is marked “U.S.A. PAT. 2014735. Stock Configuration & Condition: The tow piece stocks are smooth walnut with a pistol grip and flat shotgun style checkered blued steel buttplate. The forend is has a blued steel forend cap with the “button” nose of the magazine protruding though it. Both the forend and buttstock shows handling marks and shallow compression marks. There are three long compression marks on the left side of the buttstock – one that is 2” long and two that are about 1” long. The LOP measures 13” from the front of the trigger to the back of the buttplate. The buttplate shows light wear at the heel and toe, surface loss and light wear in the checkering. It is in about Very Good condition. The stock is in about Good overall condition. Type of Finish: Blue Finish Originality: The finish is original. Bore Condition: The bore is bright and the rifling is sharp. There is no erosion in the bore. Overall Condition: This rifle retains about 85% of its finish. There are spots of pinprick surface erosion on both sides of the barrel at the front sight, on the front sight hood, and several more between the front sight and the forend on the right side of the barrel. The barrel shows surface loss at the muzzle with wear marks on the left edge, and a few marks through the finish scattered along its length. There is also a thinned spot behind the rear sight blank. The forend cap shows multiple marks through the finish and the rear sight blank shows thinning on its edges. The receiver shows thinning on its edges and its underside, and handling marks on both sides. There is a sprinkling of light frosting on the sides of the receiver at the rear. The hammer checkering shows moderate wear and there is a small spot of surface loss in the lower tang from the lever. The screw heads are sharp. The markings are clear. Overall, this rifle rates in about Fine condition. Mechanics: The action functions correctly. The hammer has a half-cock safety and a lever safety. The action is very tight. We did not fire this rifle. Box, Paperwork & Accessories: None Our Assessment: The .218 Bee is a .224 caliber centerfire rifle cartridge designed for varmint hunting by Winchester in 1938, and was originally chambered in their lever-action rifles. The cartridge is named for the bore diameter of the barrel, not the bullet diameter. In terms of relative performance, the .218 Bee falls between the smaller .22 Hornet and the larger and more popular .223 Rem. This rifle has about 85% of its original finish remaining with a few handling marks and small spots of pinprick surface erosion scattered over the front half of the barrel. The receiver shows thinning, and the wood shows a few marks in addition to some long compression marks on the left side of the buttstock. The bore on this rifle is in great condition, so this rifle ought to be a lot of fun to shoot. It ought to be especially good for rabbits past 100 yards where the energy of a .22 Long Rifle begins to degrade below its effectiveness. The total production of this model was only 5714, spread out over three different calibers. Its factory bolt mounted peep sight is even rarer. Winchester collectors are going to be very interested in adding this rifle to their collection and will likely set the price beyond what a shooter would be willing to pay.