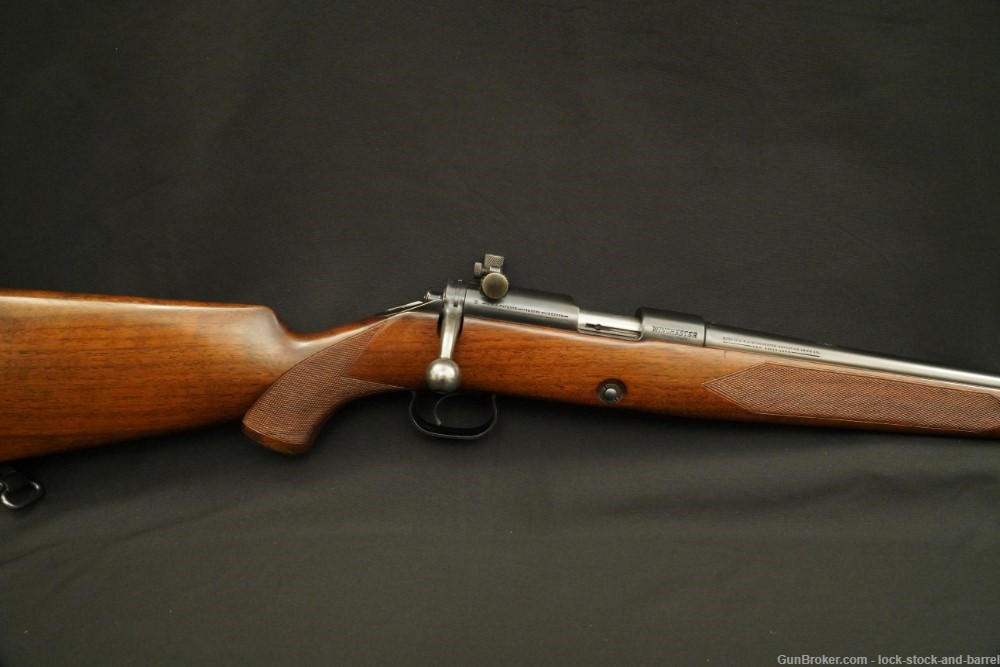 Barrel Length: The round barrel is 24” in length, measuring 0.272” in diameter at the muzzle.

Sights / Optics: The front sight is a beaded blade dovetailed to a textured ramped base forged to the barrel. The base is grooved for a hood, which is present. The left-rear of the receiver is drilled and tapped, with two pairs of holes that have been filled with black wax or clay (or some other soft, non-metallic substance). A Lyman 48 receiver sight is installed, adjustable for windage and elevation. The left side of the sight has a well defined micrometer scale, marked “0/25/50/75,” with the additional marking of the Lyman logo. There are two drilled, tapped and filled holes on the barrel for mounting sights/optics (no optics are included).

Stock Configuration & Condition: The stock is a one-piece walnut with a pistol grip, a straight comb with cheek rest on the left side, and a flat shotgun style checkered steel buttplate. It features the hand-cut checkering on both sides of the forestock, as well as the three hand-checkered “diamonds” on the forestock’s bottom. Hand-cut checkering on both sides of the pistol grip is as elegant as it is functional. The pistol grip has a hard rubber Winchester cap (marked “WINCHESTER REPEATING ARMS CO”), and the forend has an ebony nose cap. Sling plates are inlaid and screwed to the belly and the forend with Winchester Super-Grade sling swivels (standard width – 1”) installed. The stock has minimal scattered light nicks, scuffs and scratches. Checkering is generally sharp throughout. There are no chips or cracks. The LOP measures 13 5/8” from the front of the trigger to the back of the buttplate. The buttplate’s checkering is sharp, and it has mostly retained its bluing, with some loss around the edges and at the heel. Overall, the stock is in Fine condition.

Finish Originality: The finish is original with a couple spots of cold blue touch up.

Overall Condition: This rifle retains about 90% of its metal finish. Bottom metal shows minor surface oxidation, nicks, scuffs and scratches. There is cold blue touch up around the front fill screw on the barrel. The left side of the receiver has a notable spot of wear directly behind the ejection port, in front of the receiver sight, below the filled holes. Finish on the bolt knob and bolt handle retains roughly 60% of its bluing. The action shows light operational wear. Screw heads range from sharp to tool-marked with strong slots. Pistol grip end cap shows wear where wood meets the rubber, including a small gouge at the one o’clock position in the end cap’s rubber. All markings are crisp, with the exception of “SPORTING” on the bottom metal, which is still distinct but light. Overall, this rifle rates in Very Good-Fine condition.

Box, Paperwork & Accessories: This rifle comes with a 5-round blued steel magazine and Super-Grade (normal width – 1”) swivels front and rear. The magazine is marked on its floorplate with “MADE IN U.S.A. / WINCHESTER / TRADE MARK / PAT. NOV. 25, 1919.” It shows light wear with intact feed lips and a strong spring. Patina of swivels is consistent with the rest of the rifle.

Our Assessment: The tradition of target shooting has a long history in this world, whether it was for training purposes or trying to dispel boredom. Amongst the firearms used for this sport, a handful truly standout in the ranks and one of those is the Winchester Model 52. Winchester has a long history of creating excellent sporting guns. Despite their pursuance of military contracts throughout their operation, Winchester addressed civilian shooting needs consistently and spectacularly. World War I inspired an extensive change and evolution in technology, but it also saw the continued use of bolt action rifles, a reliable design that Winchester continued for the Model 52. The Post-War Production Planning Committee decided to discontinue the Model 1885 Single Shot and started the replacement process for a bolt action rifle with the same cartridge on November 28, 1917. Exactly one day later, Winchester engineers Frank Burton and T.C. Johnson received orders to “being work on the bolt action .22 as time permits.” The early rifle samples were immediately slotted for exhibition at the National Match in Caldwell, NJ in August 1919. Built on the same tooling used to produce the Model 1917, the yet-to-be-named bolt action .22 samples earned phenomenal accolades upon its performance at Caldwell. The iconic rifle received its official numeric designation of “52” on September 11, 1919; though, the design would undergo some changes. This particular Model 52 is a “Pre-Type A Speed Lock” rifle, meaning it was built after Frank Burton introduced an updated lock mechanism in 1929 and before Winchester altered the design in 1935 for safety concerns. The “Speed Lock” designation refers to Frank Burton’s new design for the rifle’s lock mechanism that provided almost instantaneous cartridge ignition when users pulled the trigger. Later Type A rifles included a shorter safety stem and a redesigned safety seat in the left receiver wall that corrected a known malfunction where the safety failed to properly engage the head of the firing pin. Considered one of the greatest of all time American 22 rifles, Winchester continued to market and produce the Model 52 for decades. It is such a beloved favorite that Winchester continued to manufacture this rifle at a loss to the company during its final years. Evolving from a first-class general target rifle into a precision tool that represented the United States in world competitions, the Model 52 is a classic design that belongs in your collection. So, bid on this beauty and enjoy!