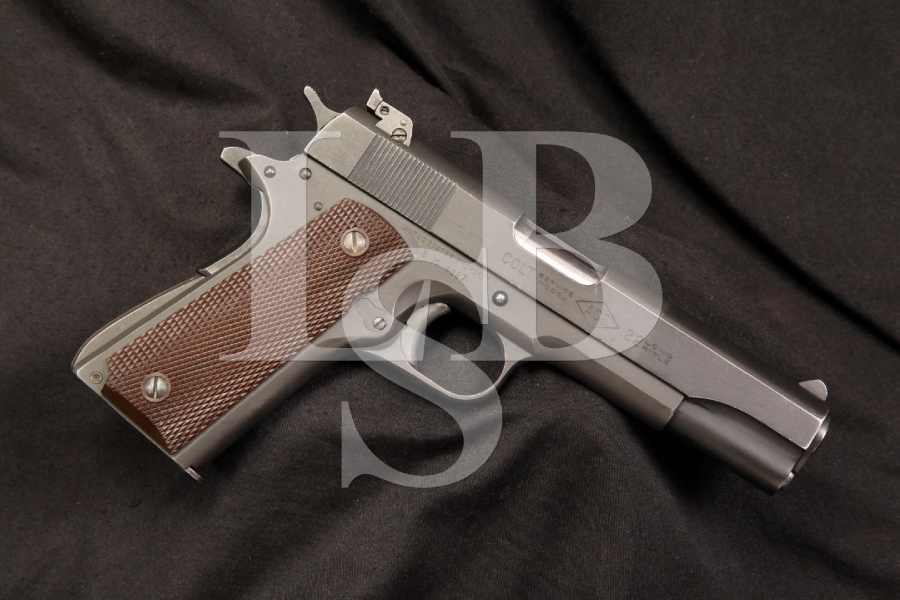 SOLD FOR: $6,873
LSB#: 140604NW35 Make: Colt Model: Service Model ACE Serial Number: SM4327 Year of Manufacture: 1945 Caliber: .22 Long Rifle Action Type: Single Action, Semi-Automatic with Exposed Hammer and Removable Magazine Markings: The right side of slide is marked “Colt”, “ACE” inside a diamond, “.22”, and “Long / Rifle”. The right side of the frame is marked “United States Property / S M 4327”. The right front of the trigger guard is marked “77” and the left front with a “VP” in a triangle and “e”. The left side of the frame behind the trigger is marked “G.H.D.”, the initials of Guy H. Drewry Lt. Col. USA, sub-inspector for Smith & Wesson .38 Revolvers, Colt .45, 38 and .22 Revolvers and Pistols, Winchester and Underwood M1 Carbines and Colt Ace .22 Pistols 1930-1946. The left side of the slide is marked “Colt’s PT. FA. Mfg. Co. Hartford, CT. U.S.A.  Patent Numbers 2,090,656 2,090,657” and with a Rampant Colt logo. The flat on the underside rear of the slide is marked “G”. Barrel Length: 4 7/8” Sights / Optics: This pistol is mounted with a flat topped square notch rear sight that is pinned to the slide and adjustable for windage and elevation. The front sight is a serrated ramp sight that is fixed to the barrel. Stock Configuration & Condition: The grips are reddish brown checkered plastic. The grips show a couple of light handling marks. The checkering is sharp and without mars. The grips rate in about Excellent overall condition. Type of Finish: The pistol has a dark gray phosphate finish. The mainspring housing is serrated and the trigger is checkered. Finish Originality: All Original Bore Condition: The bore is bright and the rifling is sharp. There is no erosion. Overall Condition: This pistol retains about 90% of its metal finish. There is thinning on the front, rear and side edges of the slide, the tops of the front and rear sights, the front edge of the frame, and the edges of the safety and slide release. The slide shows minor handling marks with compression marks on the bottom right edge below the “ACE”, below the “COLT” and on the left rear edge. There are marks through the finish on the top of the slide, on the left side of the slide, below the slide release on the frame, on the right side of the frame above the trigger and a thinned area on the edge of the frame behind the trigger. Also, there are thinned areas on the underside of the slide where it rubs on the frame and on the sides of the trigger. The front strap shows thinning and six very shallow small compression marks. The mainspring housing serrations and slide serrations are sharp but the mainspring housing serrations show thinning. The slide release serrations and the checkering on the safety, magazine release and hammer are sharp. The trigger checkering shows moderate wear. The grip screws are sharp but the rear sight windage and elevation screws are disfigured. The markings are clear. Overall, this pistol rates in about Fine – Excellent condition. Mechanics: The action functions correctly. This pistol has a two piece barrel with a floating chamber. We have not fired this pistol. Box, Paperwork & Accessories: . There is one blued magazine provided with this pistol, marked on the floorplate with “Colt / 22 ACE L.R. / Service Model” with the “ACE” in a triangle. The magazine shows only minor wear. The floorplate shows thinning on its front edge, tiny compression marks and a scattering of very light pinprick surface erosion. The magazine is in about Fine condition. Our Assessment: This is a Colt Service ACE .22 Long Rifle pistol with a two piece barrel that has a floating chamber. The floating chamber amplifies the felt recoil approximately 400%, giving the pistol nearly the same feel as the Government Model firing .45 ACP ammo. This is a great pistol with many of the features of the National Match 1911, designed so that you could target practice with the same sized frame as that used by your .45 Auto while shooting inexpensive .22 Long Rifle ammunition. Unlike the Commercial ACE which uses a lighter slide and a slightly different frame, the Service ACE uses a full size 1911 frame. Service ACE kits were made so that one could change between .22 and .45 barrels in the same frame. This pistol is in Fine condition with some thinning on its edges and a few handling marks. The slide is tight to the frame and the bore is bright. This pistol is marked “United States Property” and with the inspection stamp of Lt. Col. Guy H. Drewry, an ordnance department sub-inspector assigned to Colt and S&W. The Service Ace was only made for 10 years and not that many were manufactured until 1945, the last year of manufacture, which is when this pistol was made. Most were bought for the U.S. Navy for marksmanship training and the Navy also provided them to the Marine Corps and Coast Guard. The Service Ace is a very collectable firearm due to the low numbers made and this martially marked pistol even more so. It is in Fine condition with some thinning on its edges and a few handling marks. it is sure to make a place in the collection of a serious collector. No Colt collection would be complete without the ACE and both civilian and military versions of the Service ACE.